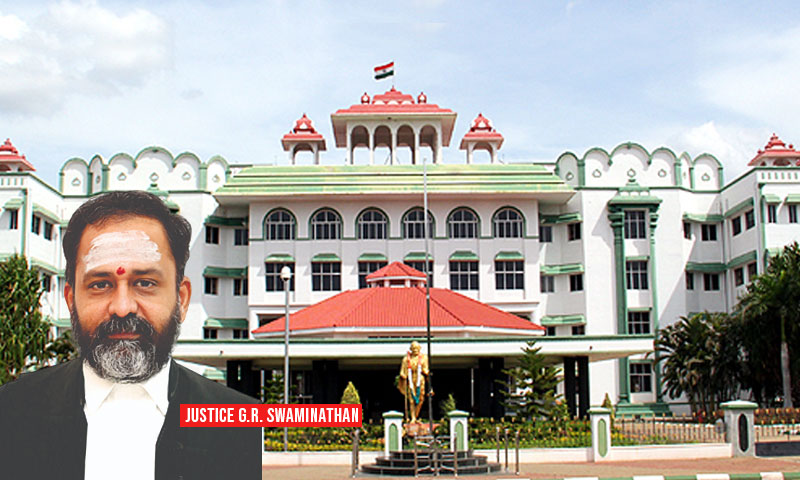 Harshly criticising the investigation by the Tamil Nadu police into the suicide of Thanjavur girl student for ruling out the angle of alleged attempts of religious conversion to Christianity from her school, the Madras High Court on Monday ordered a probe by the Central Bureau of Investigation into the matter."...there is nothing inherently improbable in the allegation that there was an...

Harshly criticising the investigation by the Tamil Nadu police into the suicide of Thanjavur girl student for ruling out the angle of alleged attempts of religious conversion to Christianity from her school, the Madras High Court on Monday ordered a probe by the Central Bureau of Investigation into the matter.

"...there is nothing inherently improbable in the allegation that there was an attempt at conversion. It could be true or false. The matter called for an investigation and not outright rejection", Justice GR Swaminathan observed while allowing the petition filed by the father of the deceased girl.

The girl, a Class 12 student of Sacred Heart Higher Secondary School, Michealpatti, had died on January 19 following an attempt to suicide.  After her death, certain video clips of her recorded by a third party named Muthuvel emerged in social media, in which the girl had allegedly made statements about forcible conversion attempts.

The High Court criticized the Superintendent of Police Tanjavur for making a press statement to rule out the conversion angle at an early stage.

"Instead of ordering the investigation officer to take the additional materials to account, the S.P directed the local police to register an FIR against the person who had taken the video", the Court noted. The Court observed that from the FIR registered against Muthuvel, it appeared that "Superintendent of Police wanted to silence any discussion regarding the conversion angle".

"The S.P virtually threatened the person who shot the video. Instead, she should have goaded the investigation to take the religious angle into account", the Court said.

The Court also noted that the State Education Minister and two other High Ranking Ministers issued public statements exonerating the school management. The Education Department also released a report absolving the school. In this backdrop, the Court made the following observations :

"It is too early in the day for the police or the politicians to jump to conclusions. But they have done so. That is why, the petitioner is apprehensive that if the investigation remains with State police, he will not get justice. His apprehension is justified

I find merit in the petitioner's counsel's contention that the police, instead of finding out the truth of the allegations made by the deceased victim, have been trying to bolster the counter narrative.

What led the child to suicide has to be investigated. Before the investigation officer, the dying declaration of the child is available. Their authenticity is undoubted. Without doing so, District Superintendent of Police wanted to completely suppress the conversion angle.

The foregoing circumstances cumulatively taken will definitely create an impression that the investigation is not proceeding on the right lines. Since a high ranking Hon'ble Minister himself has taken a stand, investigation cannot continue with the State Police".

The Court further said that there was a "counter-narrative" being built that the girl was ill-treated at her home by her father and step-mother.  "The I.T wing of the ruling party released portions of the private video that appear to exonerate the school authorities. This again raises considerable doubts about the credibility and impartiality of the investigation made by the State police", the Court said.

The Court said that in the dying declaration, the girl had not made any allegation against her step mother and had only made complaints of harassment against the hostel warden Sister Saghayamary.

The Court said that the "such deliberate leaks dent the credibility of the investigation".

Relying on R.P.Kapur v. The State of Punjab,  AIR 1960 SC 866 and Nirmal Singh Kahlon v.State of Punjab and Others,  (2009) 1 SCC 441,the court held that investigation must be free from any infirmities and the principle applies to both the grievance of the accused as well as the victim. According to Babubhai v. State of Gujarat (2010) 12 SCC 254, the conduct of the investigation officer must be impartial so as to dispel any suspicion, the court further added.

The Court further made the following observations :
"I fail to understand as to why the Thanjavur Superintendent of Police reacted as if she had come in contact with a live electric wire. After all an allegation has been made that there was an attempt to convert. The school in question is run by a Congregation. The Holy Bible says "Therefore go and make disciples of all nations, baptizing them in the name of the Father and of the Son and of the Holy Spirit, and teaching them to obey everything I have commanded you. (Matthew 28: 19-20). In Mark 16 : 14-18, Jesus says "Go into all the world and preach the gospel to every creature. Whoever believes and is baptized will be saved, but whoever does not believe will be condemned". This is called in Christian theological terms as the Great Commission.
In the literary review published in the Hindu Magazine issue dated 30.01.2022, Sudipta Datta talks about Maria Aurora Couto's "Goa : A Daughter's Story". Couto establishes the links which the Goan society developed in response to conversion, christianisation and colonisation. She explains how in spite of being divided along religious lines by Portuguese colonial policies, Goan society retained communal harmony, thanks to a strong sense of community".
The judgment also mentioned a scene from the movie "Serious Men", where a Christian school headmistress is persuading a Tamil Dalit family to convert. The judgment also referred to K.Balachander's movie "Kalyana Agathigal", in which a woman walked out of a relationship after her lover asked her to convert to Christianty. The Court said that while movies are notorious for being melodramatic, they do contain a "kernel of truth".
The Court further said :
"More than anything else, the place where the school is situated is known as Michealpatti. Obviously, it could not have been the original name. There is an interesting discussion as to how the various areas in Chennai acquired their respective names in V.Sriram's "Chennai". Someone can undertake a similar exercise for Michealpatti also. Therefore, there is nothing inherently improbable in the allegation that there was an attempt at conversion. It could be true or false. The matter called for investigation and not outright rejection. But the District Superintendent instead directing the jurisdictional police to conduct investigation chose to proclaim that the preliminary investigation has ruled out the conversion angle. If she had before her only three materials, namely, First Information Report, police video and the dying declaration, she would have been justified in stating that till then, the religious angle had not come out. But the truth of the matter is that she had before her two more materials, namely, the private video and the parents' petition. Instead of ordering the investigation officer to take the additional materials to account, the S.P directed the local police to register an FIR against the person who had taken the video".
The Court also directed that the continued incarceration of Sister Saghayamary is not necessary and directed the jurisdictional court to dispose of her bail application based on available materials.
"I hope investigation by CBI will bring out the truth", Justice Swaminathan said in conclusion.

The judgment also referred to scenes from the movie "Serious Men" based on a book of @manujosephsan starring @Nawazuddin_S.

On last Friday, Madras High Court had reserved the order after hearing the petitioner's counsel, Government Pleader and Senior Counsel appearing for the intervenor school management at length.

The Prosecution had argued that the case was being politicized and communalized by certain vested interests and maintained that the investigation was going in the right track. The Court was told that Muthuvel, who took the video, was not cooperating with the investigation.

The Immaculate Heart of Mary Society  constituted by "The Roman Catholic Congregation of the Order of Immaculate Heart of Mary, Pondicherry", the school management which intervened in the case, dismissed the conversion allegations. The management submitted that majority of its students are Hindus and there have been no complaints of conversion against the school. The management alleged that the "bogey of conversion" was thrown to shield the real culprits and alluded that the girl was facing problems at her house.

Earlier, the Madurai bench of Madras High Court had ordered the forensic analysis of the viral video in which the deceased had allegedly spoken about the forced attempts of the school authorities to convert her to Christianity.

In a special sitting, the court had directed the police not to interfere while the family performs the final rites of the child as per their customs. Since there has been no doubt as to the credibility of postmortem conducted by doctors from Thanjavur Medical College, the bench asked the District Collector to make necessary arrangements to transfer the body to the deceased child's native place.

Pertinently, the court also gave a strict mandate to the police not to harass the person who filmed the video of the girl child. Instead, the court asked the officers to focus on the circumstances that led to her suicide.