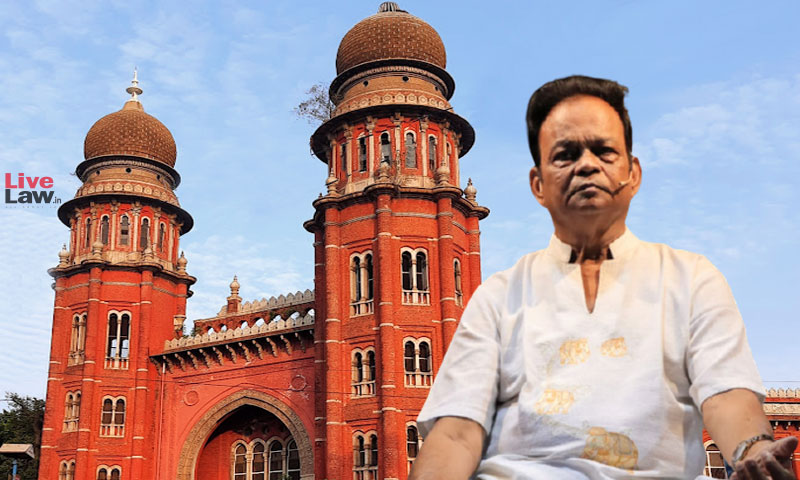 x
The self-styled godman may be admitted at a private hospital for specialised treatment if the government doctors are of such opinion, the Court added.

The Madras High Court on Thursday expressed its satisfaction over the medical treatment given at a government hospital to self-styled godman CN Siva Shankaran (popularly known as Siva Shankar Baba) accused under the POCSO Act in connection with multiple child sexual abuse cases.

Justice M Nirmal Kumar further observed that the accused may be taken to a private hospital for specialised treatment upon a recommendation made by the Government Doctors to that effect.

Siva Shankaran is a remand prisoner in Central Prison, Puzhal. He was admitted to the Government Stanley Hospital on Monday after he complained of chest pain and is continuing to receive in-patient treatment there.

The Court was hearing his plea seeking directions upon the prison authorities to admit him to a specialised private hospital.

While dictating the order today, the court noted:

"The petitioner has been given proper treatment and if there is any requirement or necessity for any other specialised treatment and such recommendation is made by the Doctors, same will be considered. As of now, the patient is provided proper medical attention as evident from the report by prison authorities."

On the petitioner's submission that one of the three stents inserted in his body has been malfunctioning, the Court asked the respondents to enquire with the doctors at the government hospital and ascertain if the petitioner requires a stent replacement.

"If Stanley Government Hospital is well equipped, the Doctors there can be instructed to do the same," the court observed orally after the order was dictated.

APP Raj Thilak appearing for the State submitted that there have been a few developments since last week. The counsel informed that the petitioner was admitted to Stanley Government Hospital on 22nd November after he complained about chest pain. Prior to that, the accused was given eye care for proliferated diabetic retinopathy on 15th November and 20th November. The counsel also submitted that the Eye Hospital has called the petitioner for review on 27th November.

The petitioner's counsel submitted that the accused, being a Type II Diabetes patient, had lost sight in one eye almost completely and his accompanying heart ailments necessitate specialised treatment with the petitioner himself bearing the costs for the same.

C.N Shiva Shankaran, revered as C.N Siva Sankar Baba by devotees, has been the founder of Sushil Hari International Residential School, Kelambakkam. He has been accused of sexually harassing and misbehaving with the minor girl children studying in his school.

He was arrested from Delhi on 13th June pursuant to three different complaints lodged in an All Women Police Station, Mamallapuram.

On the basis of the Transit Warrant, the petitioner was brought over to Chennai and remanded to judicial custody. He is currently lodged in Central Prison, Puzhal, Chennai.

He was undergoing incarceration in Chengalpett Sub Jail from 18th June 2021. During the same time, he suffered another cardiac arrest and was admitted to Chengalpett Government Hospital. He has also undergone treatment pursuant to his heart ailment in Rajiv Gandhi Government General Hospital, Chennai. On 20th July, he was again hospitalised in Stanley due to chest pain and then discharged. He was also referred to the Regional Institute of Ophthalmology for his eye condition.

Siva Sankar Baba was only granted bail in two out of the three POCSO cases pending against him.

Later, on November 14, a fresh case was registered against Siva Shankar based on an online complaint made to CB-CID currently investigating the accusations.

Previously, when the bail application came up before the High Court for hearing in August, the petitioner counsel vehemently objected to the allegations as false and levelled with 'vested interest'. The counsel also questioned the alleged victim waiting for nearly six years to accuse his client of sexual harassment.

He contended that the petitioner was deliberately arrested on the basis of second complaint, right before he would become eligible for default bail under Section 167(2) CrPC for the failure of Police to file a report on the first complaint. The counsel also complained about the various ailments that his client is suffering from that necessitates bail.

The counsel for the state argued that Shiva Shankaran has immense potential to influence the witnesses and threaten the victims. The statement of the victim recorded under Section 164 CrPC are so grave that it requires an in-depth investigation and clearly implicates Siva Shankar, submitted the Government Advocate. It was also underscored that the investigating agency can proceed with the investigation as long as it is within the four corners of law and the accused cannot demand a composite investigation instead of separate investigations on separate complaints.

While denying bail to C.N Siva Shankar Baba on 17th August, the court observed that the perverted acts of self-styled godmen on women folk are reprehensible and lamented about how the 'once noted noble profession of teachers and the divine position of godman are belittled by unscrupulous persons and the truly genuine spiritual souls have been placed under a scanner' due to the corrupt actions of these persons.

Rejecting the petitioner counsel's arguments, the court also acknowledged how hard it is for the woman to lay bare the cruelty and harassment meted out to them due to the fear of being castigated by society. "Delay alone cannot form the basis for negating the complaint", Justice M. Dhandapani noted in the order.

Finally, the court observed that the medical condition of the petitioner alone wouldn't entitle him to bail, especially when sufficient treatment has been made available to him since his arrest and incarceration and other materials at hand prima facie implicate him in the commission of the offence:

"…the petitioner, being a godman and having a large following, allowing the petitioner to walk out freely on bail, would definitely have a detrimental effect on the investigating agency in investigating the matter", the court added in the order.

"POCSO Act has been invoked against the petitioner, which means that the act has been perpetrated against young children, who were left at the divine abode for the purpose of gaining spiritual and intellectual salvation, but only to be pestered with the alleged ever groping alleged sexual attacks of the petitioner, which has had a telling effect, both physically and psychologically on the minds of the ender kids. In such a background of facts, entertaining the prayer of the petitioner would not be in the interest of justice."

Case Title: C.N.Siva Shankaran Vs The State Rep By And Another