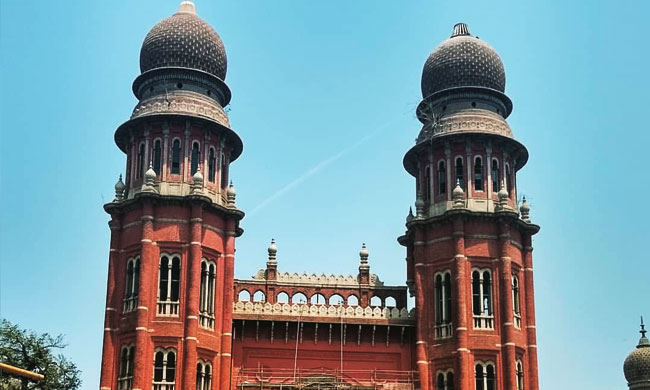 While dismissing a petition challenging disconnection of electricity service in business premises, the Madras High Court has harshly criticized the revenue and electricity officials conniving with illegal occupants of waterbodies and Government Puramboke lands. Justice S.M Subramaniam opined that the case at hand is a classic example of connivance between occupants and...

While dismissing a petition challenging disconnection of electricity service in business premises, the Madras High Court has harshly criticized the revenue and electricity officials conniving with illegal occupants of waterbodies and Government Puramboke lands.

Justice S.M Subramaniam opined that the case at hand is a classic example of connivance between occupants and concerned officials. Many revenue and electricity officers have thrown caution to the wind by allowing the encroachers to cast a legal colour on their illegal occupation by mutating revenue records and even granting them with electricity connections. The court also pointed out that this is usually done without examining the genuineness of the documents and the title to the land.

"This Court cannot be a mute spectator to such acts perpetrated by persons like the petitioner and his vendor and the judicial sword has to definitely cut through the web so that water, which is the source of livelihood of the living beings is passed on generation after generation and with equal force, the officials, who had refrained from taking any action on the encroachment should also be dealt with in accordance with law", the court noted in the order.

The court has also suo motu impleaded the Commissioner of Revenue Administration, Chennai to identify the delinquent officials and to take appropriate departmental action against them. The court has also directed that prompt legal action must be taken to remove water body encroachments near the petitioner's premises, in addition to the removal of his own illegal occupation. The court has also demanded strict action by Tamil Nadu Generation & Distribution Corporation Limited against the conniving electricity officials who granted electricity connection to the vendor of the petitioner without verifying the records. Further, the court has asked the competent authorities to complete the above action within eight weeks from the receipt of the court order.

The case of the petitioner before the High Court was that he had bought the property from one Sabira Banu in two parts, one in 2006 and the other in 2018. A notice was issued to him under Section 7 of Tamil Nadu Land Encroachment Act. The petitioner further submits that he moved a writ petition in the aftermath of this notice in 2019. Then, the respondents had taken a stand that the notice was meant to call upon the petitioner to establish his rights over the property, and the said undertaking, the petitioner says, was duly recorded by the Division Bench while disposing off the petition.

After examining the sale deeds relied on by the petitioner, the court concluded that these were not registered sale instruments that can be construed as a proper sale transaction for the transfer of title. Moreover, the Tiruvallur Tahsildar also confirmed that the survey number of the property allegedly sold by Sabira Banu to the petitioner is a waterbody and a government puramboke land.

Further, in another instance of litigation pertaining to the said property instituted by Sabira Banu herself in 2017, the court had ordered the disconnection of electricity services to the premises and directed Banu not to alienate the property to any third parties. In spite of the court order, there is an alleged sale transaction between Sabira Banu and the petitioner in 2018, the court noted.

"Further, one other aspect which stares on the face of the record is the fact that the vendor of the petitioner, according to the respondents, was issued with the notice regarding the encroachment on the water body, but subsequent to the issuance of the said notice, the vendor had entered into the alleged sale transaction with the petitioner. If the alleged sale transaction between the petitioner and his alleged vendor is bona fide, what prevented the petitioner from registering the sale deed. There is no whisper from the petitioner for not registering the sale deed...", the court said while clarifying that the respondents' statement that the registration of the sale deed was not done since it is a waterbody ought to be accepted in the absence of any material challenge to the same.

The court also observed that the petitioner failed to give any convincing reason as to why the electricity connection in the name of vendor Samira Banu was not transposed to his name after the alleged sale.

"...Had the purchase by the petitioner from the vendor been a bona fide transaction, even if not registered, the petitioner would definitely have taken steps to submit the requisite documents along with application for having the electricity service connection registered in his name. But no iota of material has been placed before this Court to show that any such steps was taken by the petitioner, which did not yield fruitful result", the court added.

In light of the above sequence of events and the inference that the sale deeds have been unregistered instruments, the court noted in the order that the balance is tilted in favour of the respondent authorities.

Therefore, the court refused to interfere with the order of electricity service disconnection passed by The Assistant Electricity Engineer, Tamil Nadu Generation & Distribution Corporation Ltd. Accordingly, the writ petition pertaining to the premises located in Perumbakkam Village of Thiruvallur was dismissed.