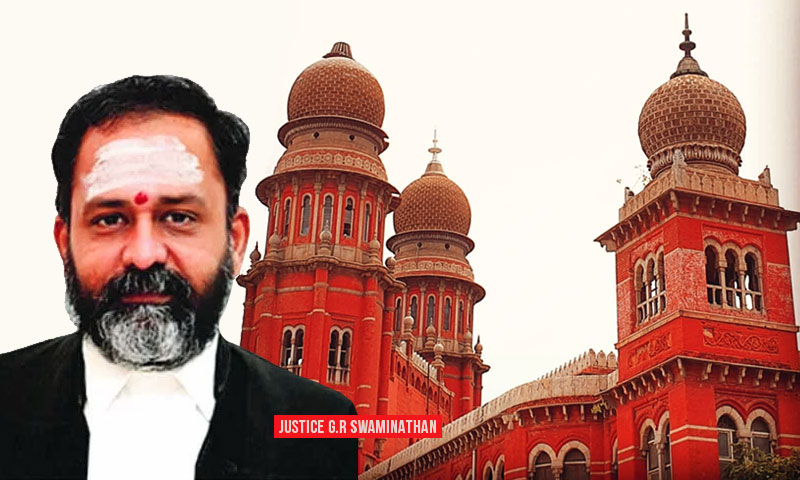 The Madras High Court has reiterated that the State has an obligation to provide basic amenities to the pilgrims whenever there is a large gathering of persons during festival times.

Following the decision of the Supreme Court in Sarika v. Shri Mahakaleshwar Mandir Committee (2018) the court held that it is the bounded duty of the government to make proper arrangements and to sanction amounts without fear of violation of the concept of secularism.

Justice GR Swaminathan held an emergent sitting and heard the case on Sunday, over a Whatsapp Video call from Nagercoil while the lawyers joined the call from Neelankarai and Anna Nagar. It was upon the plea moved by the Hereditary Trustee of the Arulmighu Abheeshta Varadarajaswamy Temple, Papparapatti Agraharam, Pennagaram Taluk, Dharmapuri District urging that their village will face "divine wrath" if the proposed Rath festival is not held on the given date, i.e., May 16.

He stated that the "Car Festival" which is a procession that starts from the temple and runs through the four streets around the temple was being held every year. However, due to the outbreak of Covid-19, the same couldn't be conducted for the past two years.

The petitioner submitted that when steps were taken to hold the procession this year, the Inspector, HR&CE, put spokes in the chariot wheels by issuing the impugned communication on 13.05.2022 instructing the Fit Person as well as the hereditary trustee not to hold the car festival.

The Advocate General stated that the Government was not opposed to the holding of the event, but that the state had concerns over the safety of the members of the general public. He gave the example of the recent tragedy in Thanjavur where 11 people including children were electrocuted during a Chariot procession. He submitted that once the defects pointed out in the communications were rectified, the procession could be carried out and the State would not have any objections.

The court after carefully considering the communication observed that the same was issued by the Inspector, HR & CE without jurisdiction.

"An Inspector is not one of the authorities listed in section 8 of The Tamil Nadu H.R.&C.E. Act,1959. No statutory provision empowers him to issue the impugned communication either to the Fit Person or to the hereditary trustee. It is absolutely without jurisdiction and hence quashed."

The court also highlighted the importance of festivities such as chariot procession. According to the court, these festivities also serve a vital social function as people cutting across all sections and castes participate and mingle together while pulling the chariot.

The court also stated that it is the duty of the HR&CE department to facilitate the holding of such customary events. When the government through the HR&CE department wants to have control and supervision over the temple administration, there is a twin duty to ensure that traditional festivities are also held by following safety standards.

The court drew attention to the G.O.Ms.No.413 issued by the Government of Tamil Nadu setting out 46 safety norms that have to be followed to ensure that no mishaps occur. These safety norms should not remain on paper but should be properly executed.

In the present case, the court recorded the petitioner's undertaking that a foolproof arrangement has been made. The court was also satisfied that the roads have sufficient width for the chariot to move. Thus, the court directed the respondents to ensure that the car festival was held without any mishap on 16.05.2022.

Case Title: P.R Srinivasan v. The Commissioner, HR&CE and others