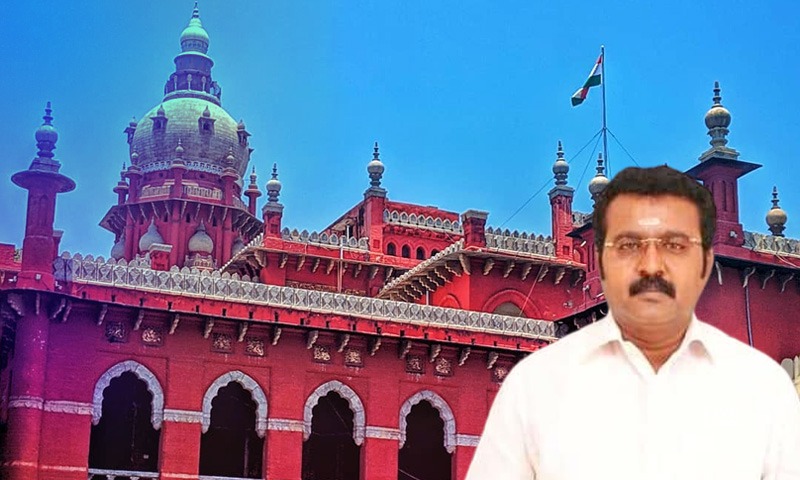 Madras High Court has on Friday granted bail to murder accused T.R.V. S Ramesh, DMK MP from Cuddalore, upon satisfaction that a substantial portion of the police investigation has been already completed. Justice M. Nirmal Kumar, while granting bail, noted that the accused MP had voluntarily surrendered after the demise of his cashew nut factory employee, and that only the...

Madras High Court has on Friday granted bail to murder accused T.R.V. S Ramesh, DMK MP from Cuddalore, upon satisfaction that a substantial portion of the police investigation has been already completed.

Justice M. Nirmal Kumar, while granting bail, noted that the accused MP had voluntarily surrendered after the demise of his cashew nut factory employee, and that only the forensics reports and other reports are yet to be received.

He had surrendered before the court on October 11.

"Accordingly, the petitioner is ordered to be released on bail on executing a bond for a sum of Rs.10,000/- (Rupees Ten Thousand only) with two sureties, each for a like sum to the satisfaction of the learned Chief Judicial Magistrate, Cuddalore and on further conditions…", the court noted in the bail order.

The deceased, father of the complainant, was an employee in the cashew nut factory of the Cuddalore Constituency MP for seven years. The complainant son argues that his father had no reason to commit suicide when he went to work as usual on 19th September. He was informed the next day that his father had consumed poison and committed suicide. However, upon examination of his father's dead body, he found out that there were other injuries too.

He accused the petitioner MP and his assistants of brutally assaulting the deceased, causing several bodily injuries and blunt trauma, in addition to forcibly administering poison to him. He alleged that the police officials were lukewarm in their approach to probe the case and nab the accused.

Apprehending inaction of police officials owing to the influence of MP, the complainant filed a writ petition before High Court. As a result, the court directed the post mortem to be conducted by JIPMER Doctors, Puducherry. Now, the investigation is being carried out by police, and the petitioner MP and his aides have been booked under Sections 147, 302, 201 r/w 149, 341, 120(b) IPC.

The Additional Public Prosecutor submitted that the injured father of the complainant was brought to the police station on 19th September; he was accused of stealing cashew nuts from the factory. During the same time, the deceased informed the police constable about his assaulters. However, since his condition was stable, the para constable directed that he must be taken to Government hospital and not to police custody.

Contrary to those directions, Additional Public Prosecutor argued that the deceased was taken to the factory again, assaulted repeatedly and then administered poison.

The post-mortem report by JIPMER Doctors revealed craniocerebral injuries and poisonous substance 'Dichlorvos' in the body, both the complainant and additional public prosecutor submitted.

"The hard disk and DVR containing CCTV footage collected from five places. CDR for the mobile number used by the petitioner and the other accused already collected and the same are sent to Forensic Study", APP informed the court about the progress made so far.

The petitioner MP stated that it was upon his instruction that the deceased, assaulted by some workmen in his own factory for alleged theft, was taken to the police station and he had played no part whatsoever in the death of the deceased. Even after that, the petitioner had left the factory, and the deteriorating condition of the deceased was brought to his attention much later. The story that he had physically assaulted the deceased is a concocted story by political opponents, he contended.

The bail conditions imposed on the DMK MP includes daily reporting before the police and non-tampering with the evidence or witness during the investigation, in accordance with P.K Shaji v. State of Kerala [(2005) AIR SCW 5560].

In its order, the court also notes that if the accused absconds, a fresh FIR will be registered under Section 229-A IPC.