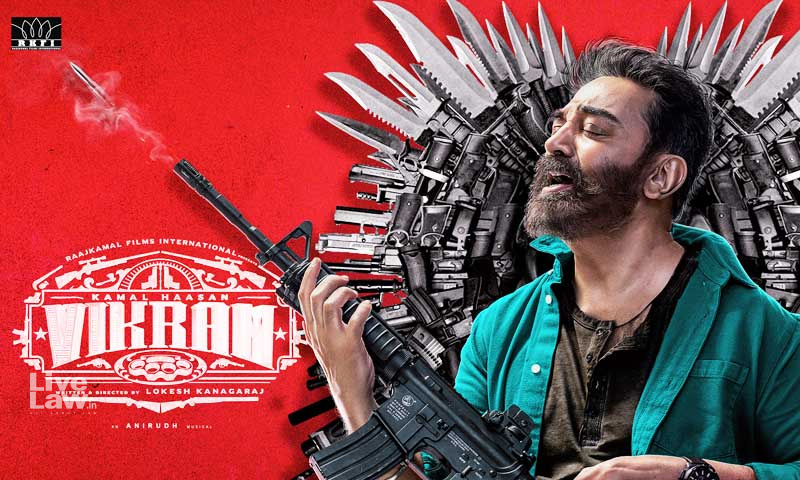 Justice C Saravanan of the Madras High Court on Thursday granted an interim injunction restraining a series of Internet Service Providers and over 1,300 websites from unauthorizedly displaying or exhibiting the upcoming cinematographic film "Vikram", directed by Lokesh Kanagaraj and starring Kamal Haasan, Vijay Sethupathi, and Fahadh Faasil among others.

The film is set to hit the theatres on June 3.

The petition was filed by Raaj Kamal Films International, who are the producers of the film, seeking an interim injunction restraining the respondents/ defendants from infringing the copyrighted cinematographic work.

The applicant, in their affidavit, stated that the respondents were involved with activities of recording, cam-cording, and reproducing the audio songs, audio-visual clips, audio-visual songs, and full cinematographic films that are screened in theatres and then copying/ reproducing them through various mediums. These recordings were distributed to the general public at a meager sum without any authorization from the copyright holders such as the applicant. These activities result in huge losses and damage to the production houses such as the Applicant.

The applicant also submitted a list of 1,308 websites that host infringing content without any license or authorization. It was also submitted that these websites do not have a "take-down" mechanism whereby the copyright holder could inform the website about the posting of infringing content by any user. The applicant also informed the court that previously there was no action from these websites when requests were made to take down the infringing material.

The applicants submitted that there was a possibility that the websites provided in the schedule and the respondents will upload and/or enable third parties to copy, reproduce, distribute, and display through cable or online medium of the Applicant's copyright protected Film and Work. Such communication of the work shall amount to infringement under Section 14(1)(d) read with Section 16 of the Copyrights Act 1957.

Thus, out of abundant caution, on account of reasonable apprehended acts of infringement the applicants approached the court. It was submitted that if the respondents are not restrained, other persons with whom the applicant has entered into agreements for marketing, promotion, exploitation, communication, etc would also suffer from losses. The applicants further submitted that unless the respondents were restrained from such unauthorized transmission, communication of the film, and work, the public interest would also suffer on account of the poor quality of the film.