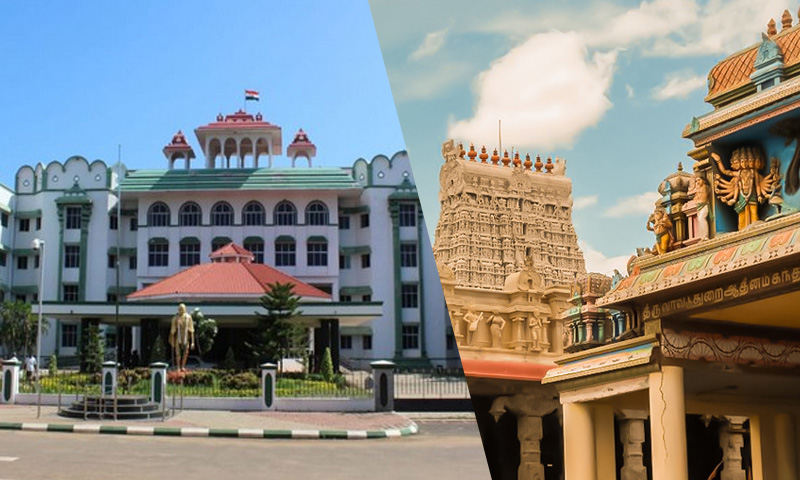 In a matter pertaining to the functioning of Tiruchendur Arulmigu Subramania Swamy Temple, Madras High Court has observed that VIP special darshan must not infringe the rights of other citizens/ devotees under any circumstances."The devotees are worshiping the God on religious faith. Thus, there cannot be any discrimination amongst the devotees, as the VIPs are also attending the temple...

In a matter pertaining to the functioning of Tiruchendur Arulmigu Subramania Swamy Temple, Madras High Court has observed that VIP special darshan must not infringe the rights of other citizens/ devotees under any circumstances.

"The devotees are worshiping the God on religious faith. Thus, there cannot be any discrimination amongst the devotees, as the VIPs are also attending the temple for darshan as devotee..."

"People are frustrated with VIP culture more specifically in closed premises like temple, as the devotees are made to suffer on account of special darshan to VIPs and other important persons. People are lamenting and in fact cursing", the bench remarked.

Madurai Bench also made it clear that VIP entry must be restricted to those in the List and their family members alone. The option should not be given to other relatives. The court also opined that security guards, staff members and other departmental personnel may not be allowed to have special darshan along with VIPs. These persons should resort to paid darshan queue or free darshan queue along with other devotees, the court added.

"There can be no argument that some people deserve special darshan. However, such treatment is reserved only for the special offices which the persons holding, but not for the individual per se. In most developed countries, the State protects only few at the top position, that is, constitutional dignitaries and the rest is to manage its securities. Certain special privileges shall not come in the way of equality of the citizens.", the court clarified.

Taking note of the current state of affairs, Justice SM Subramaniam opined that the entire system of allowing the department personnel of VIPs to have special darshan must be abolished.

"...God alone is VIP. If any VIP causes any inconvenience to the public devotees, then such VIP is committing religious sin, which will not be forgiven by the God. Thus, the conscious of the VIPs plays a pivotal role, while causing such inconvenience to the general public more specifically in Temples, Churches and Mosques...", the court noted in the strongly worded order.

"The practice prevailing in the subject temple is that VIPs, their relatives, various Government department staffs, even various department staffs are permitted to sit longer time in front of the deity thereby, depriving the devotees/general public from getting public darshan", the court added.

Madras High Court was hearing a plea filed by Seetharaman M who claimed to a freelance Archaka in the temple. By an order dated 21st December, 2021, the executive officer of the temple suspended the petitioner and prevented him from performing pujas. The petitioner contended that the servants of the temple can only be punished by the trustees and the executive officer is incompetent to pass the order of suspension.

While hearing the plea, the court also took note of the allegations related to temple activities, the conduct of archakas, criminal acts in temple premises and the management of devotees. Therefore, the court suo motu impleaded the Director-General of Police on the issue of providing protection to the temple, observing that the present situation is not conducive for the devotees to enter into the Temple in a peaceful manner.

"It is brought to the notice of this Court that the devotees are being harassed both by this Thirusudhanthirargal and by the Temple employees and therefore, the devotees, who all are visiting the Temple are unable to have peaceful Dharsan on account of a variety of reason", the court noted in the order dated 3rd March.

Suggestions were made in the form of a report by the executive officer for the proper administration of the temple and the court asked the respondent authorities to implement the same proactively. Accordingly, the court issued a set of directions including the deployment of Tamil Nadu Special Police Company consisting of 125 Police Personnel, including Inspectors of Police, Sub Inspectors of Police, Nayaks and Force in strategic places. They were to be entrusted with the duty of ensuring crowd management from 7th March. After issuing the interim measures, the court posted the matter for 23rd March to examine the compliance report.

Apart from the stringent remarks about regulating VIP Darshan, the court also gave its attention to the complaint that Pujaris and Thiru Sudhanthirargals are standing inside the temple and using 'filthy and abusive languages' against the devotees and the staff members deployed

After directing the police to take suitable action in such incidents, the court also added that devotees must be treated with dignity and any Sudhanthirargals showing misconduct or illegality will be prosecuted through the jurisdictional police.

The court has also asked the Police Superintendent to provide 40 Armed Reserve Police personnel at the temple from tomorrow and increase the strength later if necessary. It is pertinent to note that only a team of 60 Police Personnel were deployed for crowd management from7th March, contrary to the court order. Later, it was reduced to 30 police personnel according to the Executive Officer/ Joint Commissioner.

The Executive Director of the temple was asked to keep an adequate number of dustbins and garbage disposal cans with signboards, both inside and outside the temple. He was also directed to keep the seashore area and NaaliKinaaru clean as well as increase the number of toilets for devotees in the ancient temple.

Since large crowds are visiting the temple, the court also suo motu impleaded the Tiruchendur Municipality Commissioner to ensure the cleanliness of streets.

"The roads and streets falling under the control of the Trichendur Municipality are to be maintained by the Municipal Authorities cleanly and neatly and the garbage are to be removed on day to day basis...The Joint Commissioner shall conduct inspections regarding such maintenance of roads and streets reaching the temple premises", the court explained

The Joint Commissioner/ Executive Officer of the temple has also been asked to provide drinking water units in the temple premises and ensure the quality of Annadhanam given to the devotees.

"The special entry passes or other passes issued by the temple administration shall not be allowed to be misused by any person including temple employees, police personnel who all are deployed inside the temple and other Government department employees etc., and in the event of any such misuse, the Joint Commissioner may initiate all appropriate actions", Justice SM Subramaniam warned the officials of disciplinary action in case of violations

The court noted that the Joint Commissioner has obtained approval from the Commissioner for implementation of suggestions in the report submitted to the court on 3rd March and added that the former has acted accordingly.

The matter has been listed on 18th April for reporting compliance.