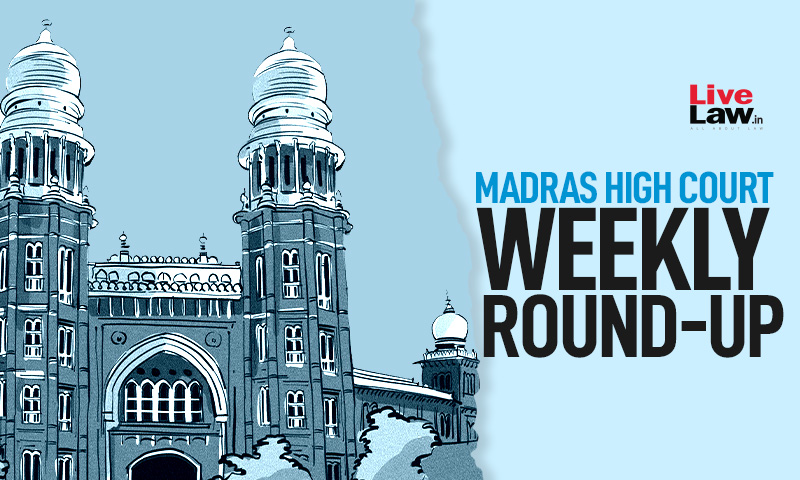 Granting anticipatory bail to a biker accused of performing dangerous stunts on a public road, the Madras High Court directed the 22-year-old to upload a video on his Instagram account against reckless driving and also report before a trauma ward duty doctor at Rajiv Gandhi Government General Hospital for three weeks.

The directions are part of the conditions imposed by the court while granting him the pre-arrest bail. Justice AD Jagadish Chandira ordered the accused to report to the Duty Doctor at Rajiv Gandhi Government General Hospital and assist the Ward Boys at the Trauma Ward in taking care of the patients from Tuesday to Saturday between 8 am and 12 PM for three weeks.

The Madras High Court recently allowed a mother's appeal against a single judge order requiring her to treat her estranged husband, during child visits, as an "Athithi" (Guest) and show hospitality by providing snacks and dinner, etc.

The bench of Justice Paresh Upadhyay and Justice D Bharatha Chakravarthy observed that the single judge was swayed by what should be the conduct of the parties towards each other and that prescribing such stipulations was not relevant for deciding their rights.

While hearing a Degree Graduate's plea seeking to allow him to study law in the absence of a 12th Standard Degree, the Bar Council of India informed Justice GR Swaminathan that as per the decision taken by its Legal Education Committee on 21st May 2022, diploma courses and polytechnic courses will be treated at par with a 12th standard certificate.

The Madras High Court recently reiterated that as per the settled legal position, there is no bar or prohibition on initiating simultaneous proceedings for claiming maintenance under different statutes. The parties however should disclose about previous maintenance petition before the subsequent court.

Justice Murali Shankar of Madurai Bench was deciding upon the plea of a husband, who was seeking to quash the proceedings before the Family Court, Thiruchirappalli in which the wife had moved a Maintenance case.

The Madras High Court on Tuesday directed the parents of a school girl, who died by suicide in Kallakurichi in July, to hand over her mobile phone to the CB-CID and cooperate with the investigation.

During a hearing of the petition filed by the 17-year-old's father for a proper investigation in the case, the Public Prosecutor Hassan Mohammed Jinnah submitted that the girl's parents were not willing to hand over the mobile phone that she had been using during her stay at the hostel.

The court had earlier directed the CB-CID to expedite the probe.

"They are not handing over the phone. If they hand over the phone of the girl, the investigation can be completed easily," the PP submitted before the court.

The Madras High Court on Wednesday refused to entertain the appeal against a single judge order of granting permission to the Rashtriya Swayamsevak Sangh (RSS) to carry out processions across Tamil Nadu on October 2.

Advocate NGR Prasad today made a mentioning before the bench of Acting Chief Justice T Raja and Justice D Krishnakumar for hearing of an appeal preferred by Viduthalai Chiruthaigal Katchi (VCK) leader and MP Thirumavalan challenging the single judge order by which the court directed the police authorities to grant permission to RSS to conduct route march with certain conditions.

The court agreed with submission of Registrar General and concluded that it was bound to follow the decision of the Supreme Court and thus refrained from entertaining the appeal.

'Sadhguru' Jaggi Vasudev's Isha Foundation on Wednesday told the Madras High Court that it was exempted from seeking prior Environmental Clearance as it came within the purview of Educational Institutions.

The bench of Acting Chief Justice T Raja and Justice D Krishnakumar was hearing the plea filed by the Foundation challenging a notice issued by the Tamil Nadu Government initiating prosecution against the foundation for carrying out construction work between 2006-2014 at Coimbatore, without obtaining mandatory environmental clearance as per the Central Government's Environment Impact Assessment Notification, 2006.

The petitioner institution claimed that since it was a "Yoga Institute" which worked for the model development of persons, it came within the purview of educational institution and was exempted from seeking mandatory clearance before construction.

The Madras High Court on Thursday dismissed a petition seeking directions to the Tamil Nadu Government to take over the management of a private school in Kallakurichi where a student had died by suicide in July this year.

Citing that such an order will have large implications, the bench of Acting Chief Justice T Raja and Justice D Krishnakumar observed as under,

"We could issue such directions to the TN Govt. But there are so many schools in the state of Tamil Nadu. Every school will have some problems. If today your Petition is allowed, tomorrow a lot of people will come asking similar reliefs. The government cannot merely takeover the management. It'll have to take over the land, pay salaries etc. Imagine the implications such a direction will have. We cannot do that"

Justice SM Subramaniam of Madras High Court has recently written to the Registrar General asking him to direct the Registry to deduct professional tax applicable to the High Court staff.

These observations came after General Secretary of Federation of Anti Corruption Teams India, Mr. C Selvaraj sent a complaint to Justice Subramaniam informing him that the staff and judges of the Madras High Court were not paying professional tax for several years even though proper Acts and Rules were in force.

The Madras High Court on Monday directed the Tamilnadu government to grant permission for the Rashtriya Swayamsevak Sangh (RSS) to conduct their route march on November 6th instead of October 2. Meanwhile, the court decided to keep the contempt petition against the Tamil Nadu government pending to ensure proper compliance.

Justice GK Ilanthiraiyan passed the orders on a contempt petition moved by RSS against State's refusal to grant permission despite court orders passed on September 22nd when the court had ruled positively and directed the state to grant permission.

The Madras High court on Friday directed the Food Safety Officers to not take media or television crew to hotels and restaurants for food inspection. Instead, the court said, the officers could seek the assistance of private camera persons and use such footage only for the purpose of prosecution.

Justice R Suresh Kumar observed that taking television crew to the kitchens even before the samples were collected was improper.