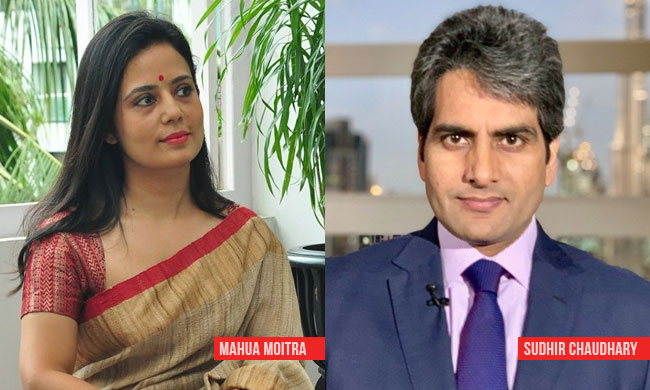 The bench of Justice Brijesh Sethi passed the order while allowing Moitra's application.

Trinamool Congress MP had challenged a Sessions court order staying proceedings in a defamation complaint filed by her against Zee News and its editor-in-chief Sudhir Chaudhary in connection with a show on her June 25 speech in Parliament.

She had contended in her plea that the Sessions court ought not to have intervened in the defamation proceedings when it was at the pre-summoning stage.

During the proceedings, Chaudhary's advocate had argued that the present plea is not maintainable as he had moved an application seeking perjury action against the MP for allegedly concealing relevant facts in her defamation complaint and consequently, the Sessions court had stayed the proceedings.

He had also submitted that such an an application can be moved at any stage.

Arguing in favour of the plea, Moitra's lawyer had argued that the Sessions court ought not to have stayed the proceedings against a "proposed" accused on his plea.

They said the application under section 340 of the Criminal Procedure Code was first moved before the magisterial court which was hearing the defamation complaint.

The magisterial court, however, had adjourned the proceedings and the hearing in the application to another date, Moitra's lawyers said and added that against this adjournment order, Chaudhary had moved the Sessions court.

In her defamation complaint Moitra had said that her June 25 speech was inspired by a holocaust poster in a United States museum, containing 14 signs of early fascism and that she had "clearly attributed" the source as she stated that the signs were taken from the said poster.

The complaint claimed that the news channel ran a broadcast stating that she had plagiarised her "hate-filled speech" delivered in Parliament.

Subsequently, Zee News filed a defamation complaint against Moitra for allegedly making statements against them to the media.

The alleged defamatory statement against the news channel was made while she was speaking to reporters on the allegation against her.

Moitra has been summoned by a magisterial court to appear before it on October 25 in the defamation complaint by the channel.