'Marriage Increasingly Being Used As A Tool To Coerce People Into Religious Conversion': UP Govt Defends 'Anti-Love Jihad' Law 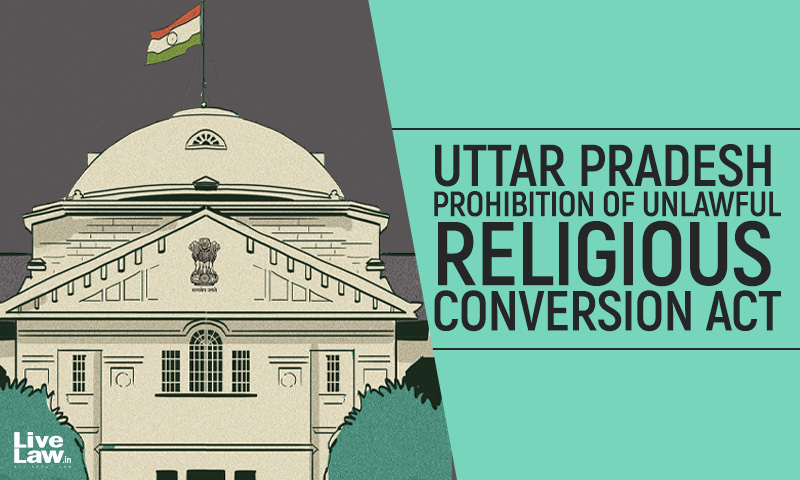 The Uttar Pradesh Government has defended 'The Uttar Pradesh Prohibition of Unlawful Conversion of Religion Act, 2021' (Anti-Love Jihad Act) before the Allahabad High Court by submitting that since marriage is being used as an instrument to convert an individual's religion against his/her will, therefore, the Act seeks to remedy this malady. This submission has been made by the...

The Uttar Pradesh Government has defended 'The Uttar Pradesh Prohibition of Unlawful Conversion of Religion Act, 2021' (Anti-Love Jihad Act) before the Allahabad High Court by submitting that since marriage is being used as an instrument to convert an individual's religion against his/her will, therefore, the Act seeks to remedy this malady.

This submission has been made by the UP Government before the High by way of an affidavit, filed in response to a batch of public interest litigations (PILs) challenging the Act.

Significantly, while stressing that the community interest will always prevail over the individual interest, the Government has submitted that the law in challenge, seeks to protect the public interest and maintain public order, and safeguards the interest of the community.

"When there is fear psychosis spread in the community at large and the community itself is endangered and succumbs to the pressure resulting in forceful conversion, under the said circumstances it becomes necessary that the interest of the community as a whole requires protection and no microanalysis of individual interest can be looked into," the affidavit submits before the Court.

By asserting that the law is identical in nature to the Laws that are already in existence in at least in eight States of the country besides the State of Uttar Pradesh, the Government has also submitted that in the neighboring countries too, such laws have been like in Nepal, Myanmar, Bhutan, Sri Lanka and in Pakistan.

Further, the affidavit states that there is ample data in public record which shows that forcible conversions have in fact created a fear psycho is across the entire State, which in turn has warranted the need for such legislation.

Importantly, referring to the cases of a Hindu woman or a man wishing to marry a Muslim man or woman, the Affidavit states thus:

Calling this exercise a loss of dignity, the affidavit avers that conversion in such cases is not exercised as a choice but on account of compulsion due to personal law intervening.

Significantly, the Government has stated that the Allahabad HC's November 2020 ruling in the case of Salamat Ansari case needs reconsideration as it doesn't lay down good law.\

[Breaking] "Right To Choose A Partner Of Choice A Fundamental Right": Allahabad High Court Says The Judgments Which Held "Conversion For The Purpose Of Marriage Only" Not Good Law

The Government has further submitted that in the Salamat Ansari case, the Court didn't deal with the question relating to an inter- fundamental right and intra-fundamental rights as it has also skipped the attention of the court as to what will be the scope of liberty of an individual qua the societal interest.

Interestingly, in the Salamat Ansari case, the Allahabad High Court had observed that "Right to live with a person of his/her choice irrespective of religion professed by them, is intrinsic to right to life and personal liberty."

"None of these judgments dealt with the issue of life and liberty of two matured individuals in choosing a partner or their right to freedom of choice as to with whom they would like to live," the court had said.

"No fundamental right is absolute"

The affidavit also reads that the Act in fact ensures that the decision of an individual to convert to another religion is theirs and theirs alone, however, objections could be filed if they have reason to believe any foul play,

"Thus, there is a conflict of interest which is an issue addressed by means of the instant legislation wherein the inter fundamental right of the individual are safeguarded," the affidavit reads.

Against this backdrop, the affidavit submits that the Act just gives the relatives the power to file an FIR in cases of forceful conversion and that the Act goes on to ensure that every individual is granted an equal moral membership in the society.

In this regard, the affidavit further reads thus,

"The diminished autonomy of the coerced individual does not let them be a part of a relationship or religion which they would not voluntarily choose…..Forcible conversions strike at the heart of personal autonomy and individual agency."

"The impugned Act, instead acts as an instrument to restore the dignity of all those persons who have been forcefully converted from the constitutional guarantee of Equality of status. Equality of status means the ability to be regarded as a social equal in the society, and a forcible conversion denigrating the victim's sense of identity altogether," the affidavit further states,

Lastly, the government in its reply has also stressed that the petitioners are motivated by social media propagandas of 'Ghar Wapasi' and rather, they have not focussed on the legal issues and therefore, they are busing the process of law by filing of the instant PIL and using the same as a tool for publicity.