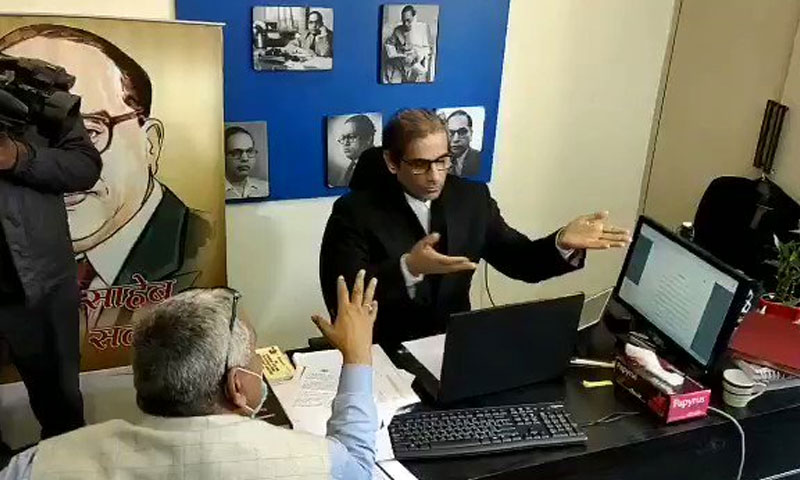 The Delhi High Court Women Lawyers Forum on Saturday condemned the raids at the offices of Mehmood Pracha, an advocate representing many accused in the Delhi riots conspiracy cases. In a letter addressed to the President of the Delhi High Court Bar Association, Mohit Mathur, the lawyers associated with the forum discouraged the investigative agencies from arraigning lawyers as accused...

The Delhi High Court Women Lawyers Forum on Saturday condemned the raids at the offices of Mehmood Pracha, an advocate representing many accused in the Delhi riots conspiracy cases.

In a letter addressed to the President of the Delhi High Court Bar Association, Mohit Mathur, the lawyers associated with the forum discouraged the investigative agencies from arraigning lawyers as accused in criminal cases, merely for intimidating them.

The letter refers to the raid conducted in the office of Advocate Mahmood Parcha by the Delhi Police and states that such raids and investigations are a way to subdue other lawyers and discourage them from representing their clients in controversial cases like the Delhi riots.

They further shed light on the fact that many lawyers, who openly defend civil liberties are also the targets of this subjugation. "However , this is also a larger issue that goes beyond the riots case, wherein lawyers who are vocal about defending civil liberties are being systematically targeted," stated the Forum. They also asserted, "This is clearly an act of vindictiveness on part of the investigating agencies whose actions are preventing lawyers from carrying their professional duties."

They expressed their condemnation towards these vindictive acts strongly. While concluding, they requested the President of the Delhi High Court Bar Association to speak out against such intimidation. They stated, "We urge you to take a strong stand against this trend and raise this issue before appropriate forums in order to protect members of the Bar from unscrupulous actions of the investigating agency."

The Special Cell of the Delhi Police on Thursday raided the office of Advocate in Delhi riots conspiracy cases, Mehmood Pracha. The raid was based on a warrant from a local court to search for "incriminating documents" and "metadata of outbox" of the official email address of Pracha's law firm.

In a video of the raid posted in twitter by journalist Aditya Menon, Pracha is seen objecting to the seizure of his laptop by the police, citing client-attorney privilege. Pracha is seen saying that the police may examine the laptop but cannot seize it as it will amount to breach of attorney-client privilege. He is also seen telling the police that seizure will be in violation of the court order. The police officer in the video is seen replying that he wants to take the 'hard drive'.

On Friday, the Court summoned an Investigating Officer connected with cases arising out of the Delhi riots over the CAA, besides requiring him to produce the entire video footage of the search conducted by the Delhi Police.

Parcha on the other hand told the Court that the search was conducted at his office from 12 noon on December 24 till 3 AM on December 25 and according to the provisions of section 165 CrPC, Volume III, Chapter II, Part A, Rule 14 and 16, the IO should have intimated forthwith the search and the seized articles to the concerned Magistrate. However, he submitted that the same has not been done and therefore, he has filed the above application under section 165(5). He told the Court that the entire search was videographed as per the Court order of December 22. He submitted that he is entitled to a copy of the video footage.

Pracha was the lawyer of Bhim Army chief Chandrashekhar Azad in the cases related to CAA protests. After hearing his arguments, a Delhi Court had granted Azad bail in cases related to Daryagunj violence during CAA protests last year after observing that reading of preamble to the Constitution does not amount to incitement to violence.

Pracha had also appeared in a case in the Delhi High Court which challenged an instruction issued by the Delhi police to show restraint while arresting accused in Delhi riots case taking note of 'resentment in Hindu Community'. The High Court refused to interfere with the instruction observing that it was issued after the petitioner was chargesheeted and hence no "prejudice was caused" to the accused.