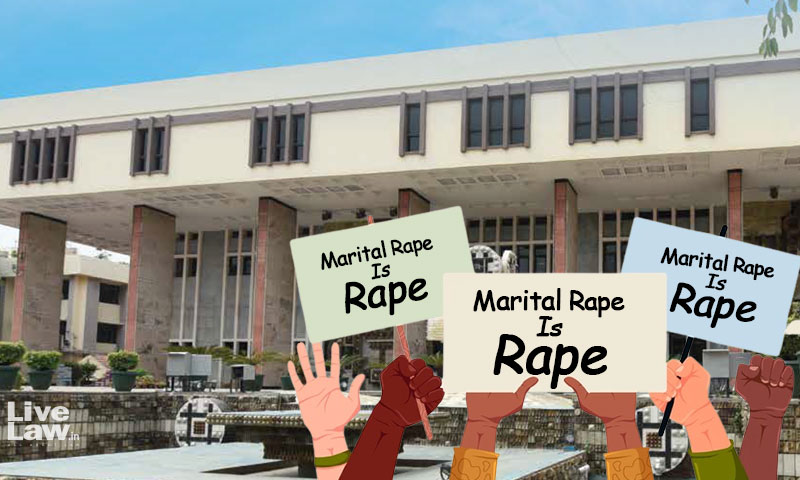 The Delhi High Court on Friday continued hearing a batch of petitions challenging the exception to Section 375 of the Indian Penal Code, which exempts forceful sexual intercourse by a man with his own wife from the offence of rape.Advocate J Sai Deepak representing Men Welfare Trust today concluded the rejoinder submissions opposing the criminalisation of marital rape before a bench of...

The Delhi High Court on Friday continued hearing a batch of petitions challenging the exception to Section 375 of the Indian Penal Code, which exempts forceful sexual intercourse by a man with his own wife from the offence of rape.

Deepak began today's submissions by clarifying the stand of Men Welfare Trust by arguing that the entity was not against the legal recognition of spousal sexual violence. He added that its focus has been on three aspects: one, regarding proper forum; two, whether existing law is inadequate and three, on gender neutrality in which the law is moving.

He submitted that the fact that the petitioners have challenged exception 2 of  Section 375,  Section 376B of IPC and Section198B of CrPC, shows that they were aware of the existence of specific and special treatment in the legislation, the basis of which is the existence of marriage.

"….so when there exists a very specific reason which forms the basis of the provisions and there is a consistent treatment meted out from the institution across the Code, they have just established a case against themselves which is to say that there is an intelligible differentia and there is no manifest arbitrariness," Deepak submitted.

He added that when the Code creates an ecosystem based on certain provisions, both under the IPC and Domestic Violence Act, it is proof of the existence of a very specific logic and rationale. The exception can't be held to be "manifestly arbitrary" or "capricious" so to invalidate it on the ground of violation of Article 14.

"So the position is, there is a logic to which we disagree with but that disagreement does not rise to the level of unconstitutionality," Deepak submitted.

Deepak then referred to Section 3 of the Domestic Violence Act which provides for the definition of domestic violence. Reading the said definition, Deepak submitted that the Act includes sexual abuse which is defined specifically under the Act.

According to the definition, sexual abuse means "any act or conduct which is of such a nature as to cause bodily pain, harm, or danger to life, limb, or health or impair the health or development of the aggrieved person and includes assault, criminal intimidation and criminal force."

Addressing the petitioners' contention that the Act is inadequate in terms of the forum that the victim has access to and the remedies are primarily civil in nature, Deepak referred to Section 19(2) of the Act which deals with the provision of residence orders being passed by the Magistrate.

Under Sec. 19(2) of the Act, it has been stated that the Magistrate may impose any additional conditions or pass any other direction which he may deem reasonably necessary to protect or to provide for the safety of the aggrieved person or any child of such aggrieved person.

"Typically under sec. 19(2), based on what is known as the Domestic incident report, FIRs are registered either under sec. 498A and some under sec. 376B of IPC, and there is a reason for this. Sec. 376B which speaks of sexual intercourse without consent between former husband and a wife speaks of decree of separation or otherwise. Therefore, based on DIR, it is possible for the Magistrate to come to the conclusion that even if there exists no decree of separation which declares formal separation between parties, if the history of relationship based on the report reveals de facto separation, even if they share the same bed and same home and live under same roof, it is possible for a sec. 376B to be registered," Deepak submitted.

"It is not a question of absence of remedy, it is a question of perception with respect to the adequacy of remedies, which again does not fall under the realm of unconstitutionality," he added.

Deepak then relied on the judgment of the Government of Andra Pradesh v. P Lakshmi on the aspect of whether the Courts have the power to declare the Act or legislation to be invalid and what is it that the judiciary can do when dealing with questions of constitutionality of a legislation.

It was submitted that the legislature and Government have to power to undertake social experiments which cannot be interfered with by Courts on the grounds of unconstitutionality.

"The doctrine of separation of powers is not to say "ye aapka ilaaka hai ye mera ilaaka hai" but to basically come to a conclusion that the public right to participate in a policy making and law making is not stifled through judicial interference by undue powers in the name of judicial review," Deepak argued.

He further submitted that when there are pluralities of reasons sought to be taken and legislature takes the call that marriage as an institution is to be protected through consistent treatment in IPC, the same cannot be interfered with by the Court.

He also argued that even if, in a given situation, it was possible for the judiciary to direct the legislature to come out with an enactment, what cannot be dictated is the nature of enactment and end goals.

Deepak concluded by referring to the Parliamentary Committee Report which dealt with sec. 375 of IPC and international position, specifically UK law on the subject.

At the end of the hearing, ASG Chetan Sharma appearing for the Centre requested that the petitioners may rejoin making submissions after Central Government makes its stand before the Court.

"12 days have already passed. We will hear them, what to do now. Whenever you want to come...we are hearing them because you need time.We will hear others and we'll do what has to be done. We want to hear you," Justice Shakdher remarked.

On a query put forth by Advocate Karuna Nundy, the Court asked Sharma to take instructions if the Central Government would still stick to its earlier stand in terms of previous written submissions and affidavit filed in the matter, or its latest stand that it is seeking suggestions from stakeholders to revisit the issue.

The matter will now be heard on Monday when Senior Advocate Colin Gonsalves will begin rebuttal arguments on behalf of one of the petitioners.

Yesterday, Deepak had argued that the Court cannot strike down a law or a provision to create a new offence or expand the scope of an existing offence. The Court cannot change the dynamics or objective of the law as intended by the legislature.

Earlier, Advocate RK Kapoor representing NGO Hridey had submitted that sexual intercourse between a husband and his wife in a marital relationship cannot be labelled as rape and at worst, can only be called a sexual abuse. He said that the said fact would be clear from the definition of cruelty as defined under the Domestic Violence Act 2005.

Previously, Senior Advocate Rebecca John appearing as amicus curiae in the matter concluded her submissions. She submitted that the retention of exception 2 of Sec. 375 of IPC will not be constitutional.

John had also submitted that availability of other provisions in various legislations including  Sections 498A, 304B of IPC, Domestic Violence Act and other civil remedies, are insufficient to deal with the offence of rape under sec. 375, as regards to a wife alleging rape by her husband.