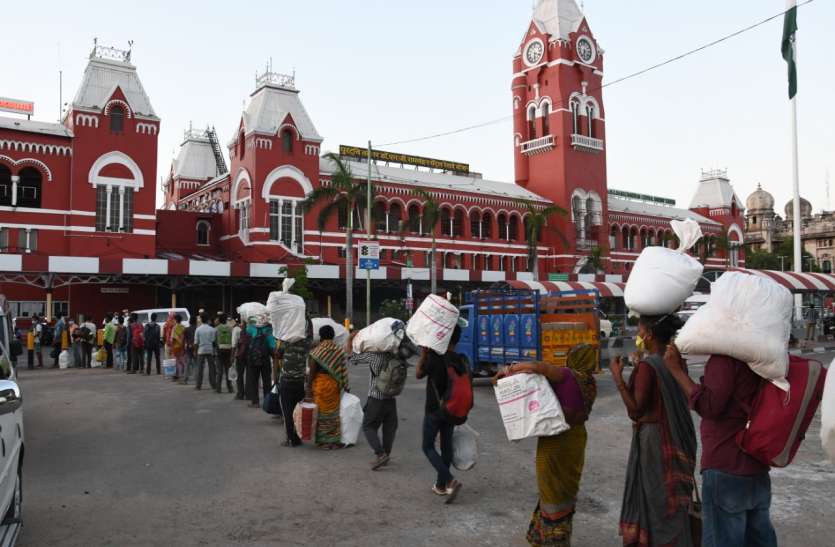 "In arterial roads, the migrant workers are exhibiting their anxiety to reach the Railway Station and they are also not maintaining the social / physical distancing and they do not possess sufficient protective masks also and therefore, the immediate concern of the State Government is to accommodate them in shelter homes / identified places", observed the Madras High Court on Wednesday.

Stating that it could take judicial notice of the aforesaid fact, the court added that the requisite information "shall be made available in the public domain by today itself".

The Division Bench of Justices M Sathyanarayanan and Dr Anita Sumanth directed that "Some of the Non Governmental Organisations, for which, the learned counsel for the petitioner also represents, in coordination with the like minded Non Governmental Organisations, shall also coordinate with the migrant workers as to their orderly behaviour and render necessary help to board the trains bound for their home States, etc".

"Since the accommodation and transportation of the migrant workers stranded in the State of Tamil Nadu is looming at large, this Court is of the considered view that a comprehensive Status Report is to be filed by the official respondents as to the effective measures/workable solutions in terms of the Standard Operating Procedure formulated", ordered the Court.

The Court, during the course of arguments, also put a specific query to the Government Pleader as to the identification of the shelter homes / places where the migrant workers who are waiting for the transportation to their home States, can be accommodated, and required that "the same may be made available in the public domain". "The learned Government Pleader undertakes to do the needful immediately", recorded the bench.

In the PIL, it was advanced on behalf of the petitioner that though some Standard Operating Procedures [SOPs] in the form of various administrative instructions have been put in place to deal with the issue relating to the migrant workers / Labourers, the following are the issues yet to be addressed:

(a)List of Shelters wherein migrant workers can be accommodated before their transportation to their home States.

(b)Registration of the migrant workers for transportation through trains to their home States though available in the website, the language used for uploading the information is only in English and not in the languages such as Hindi, Odiya, Bengali, Bhojpuri etc., and steps are being taken by the concerned authorities to upload the information in the said languages also.

(c) There must be a better coordination between the State Government and the Ministry of Railways as to the schedule of trains originating from Chennai to various States for transporting the migrant workers.

It was also urged that some of the migrant workers do not have authenticated identification cards in the form of Aadhar Cards etc., and the Non-Governmental Organisations, in which the petitioner is also a party, are trying their level best to coordinate with the Governmental Agencies for registration and transportation, but still there are some problems and the concerned Departments may also address the same.

In this context, there was a notice of motion returnable on May 26.

The government pleader, accepting the notice, invited the attention of the Court to a GO of the Revenue and Disaster Management [DM- II] Department of May 7, submitting that comprehensive guidelines have been put in place based upon the Ministry of Home Affairs Order dated April 29 which speaks about the inter-State movement of migrant workers, pilgrims, tourists, students and other persons who are stranded at different places due to lock down and the said order also mandates the State Governments to designate Nodal Officers to have coordination with the respective State / Union Territories Governments to ensure orderly receiving and sending the stranded people between the State of Tamil Nadu and other States / Union Territories as per SOPs. It is further submitted that the State Government, taking into consideration the said guidelines, had appointed the Additional Chief Secretary to Government, Revenue Disaster Management Department, as the Nodal Officer in the State of Tamil Nadu for the movement of the said persons and a team of officers has also been constituted to work with the said Nodal officer and the Standard Operating Procedure is going on smoothly.

As to the information regarding the registered migrants, the Court observed that the departure time of the trains to various States shall also be made available in the websites of the Ministry of Railways as well as the Revenue and Disaster Management of the Government of Tamil Nadu. The ASG representing the Union of India as well as the Government Pleader undertook to do the needful immediately.