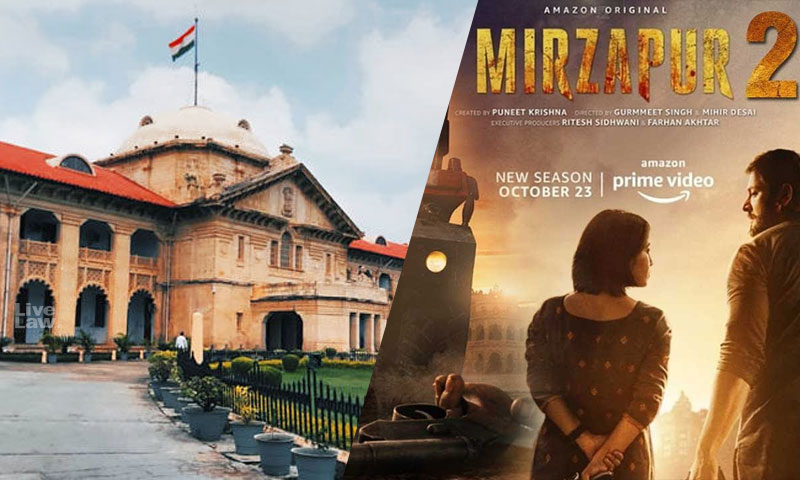 The Allahabad High Court on Thursday (18th February) stayed the arrest of 'Mirzapur Series' Directors and Writers namely Karan Anshuman, Gurmeet Singh, Puneet Krishna and Vineet Krishna. While staying the arrest, the Bench of Justice Pritinker Diwaker and Justice Deepak Verma also issued a notice to the state government and the complainant in the matter seeking their reply.The...

While staying the arrest, the Bench of Justice Pritinker Diwaker and Justice Deepak Verma also issued a notice to the state government and the complainant in the matter seeking their reply.

The aforesaid first information report was lodged against Farhan Akhtar & Ritesh Sidhwani on 17th January 2021 at Kotwali Dehat Police Station (Mirzapur) at the instance of a local Journalist Arvind Chaturvedi for an undated incident.

As per the FIR, the primary allegation of the Complainant is that 'certain' content in Web Series titled MIRZAPUR depicts the town of Mirzapur (and the places within) as anti-Social and infested with crime and that the Series promotes illicit relationships, abusive language, casteism and portrays a wrong/ polluted picture of the Legal/Judicial System therein.

It has been further asserted by the Complainant in the FIR that the portrayal of the town of Mirzapur in such a manner is far away from the reality of life in Mirzapur and thereby has hurt his sentiments.

Interestingly, the first informant has also mentioned the fact that some of his friends/acquaintances have started calling him as "Kaaleen Bhaiya" who is the antagonist in the series and is involved in various illegal activities.

Also, Karan Anshuman and Vineet Krishna are the writers of the first season and Puneet Krishna is the writer of the second season of Mirzapur.

It was also submitted that the Series has been created and is exhibited sans any intention whatsoever whether on part of the Petitioners or the professionals associated with the same to hurt religious feelings/sentiments and/or to break the public peace and/or to incite or likely to incite any class or community of persons to commit any offence against any other class or community and/or creating or promoting enmity, hatred or ill will between classes.

Further, they argued that the first season of the web-series was released on 16th November 2018 and after a huge success, the second season was launched on 23rd October 2020, and it was after almost 3 months the FIR has been lodged.

It was also contended that what is objectionable must be ascertained from the lens of a reasonable person by applying the community standards test and the community in which the content is found and is seen in fact, does not consider such content as objectionable.

Importantly, it has been argued that the impugned FIR is nothing but a cheap publicity stunt by the first informant who is a local journalist in the city of Mirzapur and is seeking political favours from the ruling party.

"By lodging the impugned FIR the first informant is trying to score political mileage and the fact that the State government is hand in gloves with the first informant is evident from the fact that the FIR was lodged on 17.01.2021 and in a span of four days, on 20.01.2021, a team of police officers were rushed to Mumbai to investigate the matter. Such a quick response in such a frivolous case clearly shows that the respondent no.1 (State of Uttar Pradesh) is equally complicit as far as the lodging of the impugned FIR is concerned."

It was also argued that the petitioners have not been named in the F.I.R. and they are on better footing as compared to named accused persons in the F.I.R.

Also, a stay on the entire proceedings initiated in the case was also sought along with a prayer that they should not be arrested/harassed the petitioner in pursuance to impugned First Information Report.

Here, it is important to note that the Allahabad High Court on Friday (29th January) stayed the arrest of 'Mirzapur Series' producers Farhan Akhtar and Ritesh Sidhwani.

In this backdrop, the plea by the petitioners has also stated that after the interim order was passed by this Hon'ble Court, the investigating officer sought to expand the scope of the investigation and has issued notice to them in which he has specifically stated that they are also an accused in the present case.

Mirzapur matter before the Supreme Court

In a plea seeking for ban on the Indian web series, "Mirzapur", the Supreme Court last week issued notices to Amazon Prime Video, Central Government, and Excel Entertainment, producer of the show.

A Bench headed by Chief Justice of India SA Bobde heard the matter and proceeded to seek a response from the Respondents.

It may be noted that the plea has been moved before the Supreme Court by one Sujeet Kumar Singh, a resident of Mirzapur.

He has submitted that his intent to move the plea is to protect the historical and cultural value of the district of Mirzapur located in Uttar Pradesh, and that the web series, by showing vulgar and shameless scenes, attempts to mar the name of the city.

By showing every resident of Mirzapur as a "goon, vagabond and adulterer in front of the country", it is submitted that the web series has "completely tarnished the historical and the cultural image of the city/district".

In light of the above, the plea seeks for a ban on the release of Mirzapur 2, the sequel, and for directions to set up a pre-screening committee for content that is directly released on online platforms. It further prays for censorship of these shows and shows, on par with movies that get censored before releasing in theatres.

Case title - Karan Anshuman And 3 Others v. State Of U.P. And 2 Others