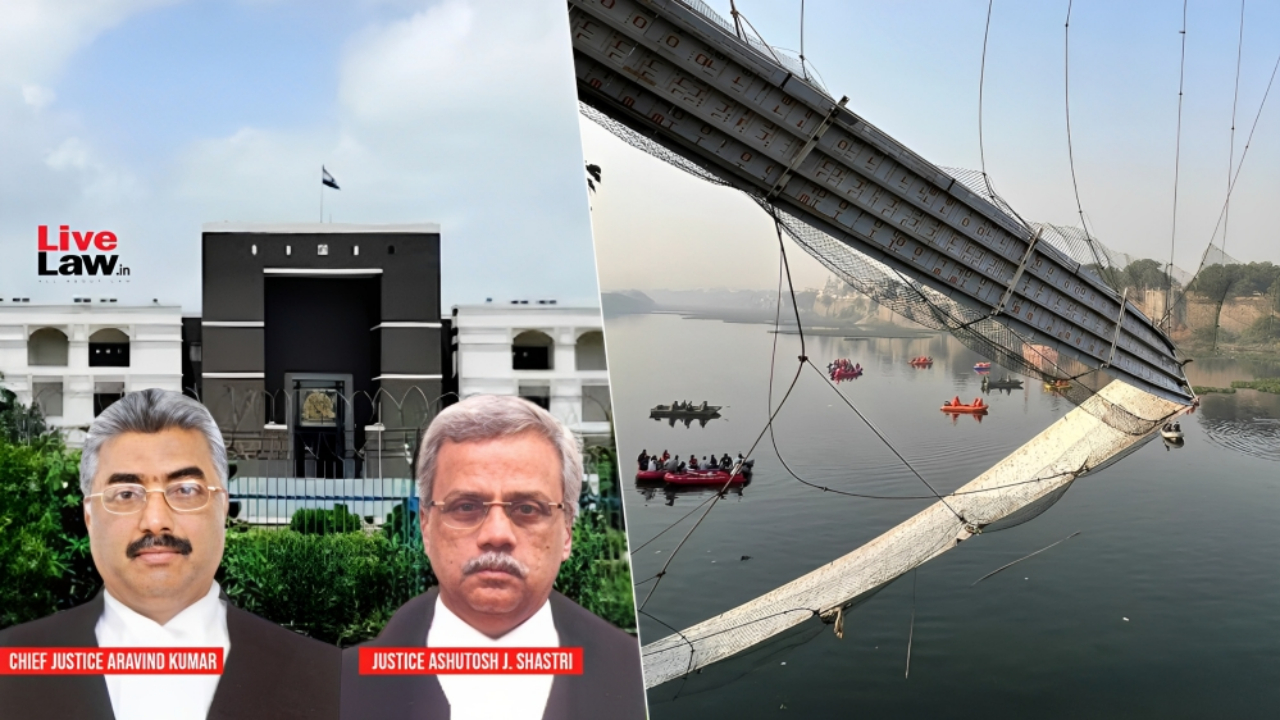 While hearing the suo moto case pertaining to the October 30 Morbi Bridge Collapse incident which took the lives of 141 people, the Gujarat High Court today noted that the Morbi Civic Body had ignored the warning signalled by the Private Contractor (M/S Ajanta) regarding the 'critical condition' of the Morbi Suspension bridge.

The bench of Chief Justice Aravind Kumar and Justice Ashutosh J. Shastri further noted that the communication between the Ajanta company and the Morbi Civic Body/Nagar Palika was focused more on the prices of tickets and the retention of the contract, rather than bestowing attention to the repair of the bridge, which was in a critical stage.

"The tenor of the letter sent by the Nagar Palika to the Ajanta on 19/01/2022 indicates concentrates more on the price of the tickets rather than the price of the tickets. In other words, as of 19/01/2021, the Nagar Palika seems to have ignored the warning of the condition of the bridge which had been signalled by the m/s Ajanta. Thus, the communications exchanged between the Morbi Nagar Palika and m/s Ajanta is for the retention of the contract by Ajanta rather than bestowing attention to the repair of the bridge, which was in a critical stage," the bench remarked.

The Court further noted that the MOU/agreement signed between the civic body and Ajanta on 8 March 2022 was not approved by the general body of the Civic Body. The Court also questioned the State Government as to why did the state not exercise power under Section 263 of the Gujarat Municipality Act to supersede the Municipality. This provision allows the State to dissolve a civic body in case of abuse of power, default, etc.

However, since the State submitted that it was waiting for the SIT to submit its report on this matter, before making any decision in this regard, the Court refrained from making any observation pertaining to this issue, however, it did add that the catastrophe or the tragedy, prima facie, cannot be brushed aside.

Further, the Court also inquired from the State as to what action has been taken by it the Morbi Municipal Committee's Chief Executive Officer SV Zala. To this, appearing for the State Government, Advocate General Kamal Trivedi informed the bench that it was awaiting a report of the SIT.

To this, Chief Justice Aravind Kumar observed that at least, dereliction of duty proceedings should have been initiated against him. "You do it on your own or else we will issue the directions," CJ Kumar said.

"What was the Morbi Civic body doing between August 2017 to March 2022? The duration during which there was no agreement/MOU for the maintenance of the bridge. Who allowed Ajanta to maintain the bridge? The bridge was shut only in March 2022, what about the 5 years duration before that? How will you explain your inaction?," the bench asked the Nagar Palika as it observed that the civic body remained silent for around 5 years.

Compensation proposed for the victims/dependents

"We are not satisfied with the compensation being paid to the victims' families. A family should at least get Rs. 10 lakhs as compensation...In so far as the compensation proposed to be paid to the family of the deceased and other seriously injured people is concerned, it is abysmally on the lower side. The compensation must be realistic. We hope and trust, this would be raised": CJ Aravind Kumar remarked as it asked the state to follow the thumb rule of evaluating compensation as is done in motor vehicle accident matters.

Further, when Advocate General Kamal Trivedi informed the Court that Rs 3000 would be paid to children monthly who have lost parents, CJ Kumar remarked thus: "What is this Mr. Advocate Genera? This amount is highly insufficient as Rs 3,000 these days would be consumed by the uniform and books only".

In this incident, seven children became orphans and 12 children lost one of their parents.

During the course of the hearing, AG Trivedi informed the Court that around Rs. 5 Crores have been received by the Gujarat government. The bench was further told through the state's affidavit that the Adani Group has donated Rs. 25 Lakhs as part of its CSR Liability.

Further, the Court also sought details of the break-up of all the amounts (to provide compensation) as to how much amount is from the CM relief fund, how much from the PM relief Fund, and how much has been received from the private donors. The state government was also asked to furnish the details of the dependents/kins of the deceased persons.

Other observations/orders of the High Court

During the course of the hearing, the court also directed the State Government to conduct a survey of similar bridges in the state and thoroughly check whether all of them are in the proper condition, if not, then get them repaired.

"It is high time that all the officials who are either monitoring, managing, controlling, and administering such bridges across the state should ensure that the bridges in their jurisdiction are in proper condition, and if not, remedial measures should be taken. How many similar bridges are in Gujarat, the state has to submit a report on this within 10 days," the Court ordered.

Regarding the compensation of Rs. 50K for the victims/severely injured persons, the Court said that this amount is also on the lower side. Further, noting that there is no record of the nature of injuries suffered by the injured persons, the Court directed the state government to file a fresh affidavit indicating the same so that compensation can be enhanced accordingly.

Importantly, when an advocate, who has been impleaded in the matter raised the issue of non-implication of the owners/directors of Ajanta, Chief Justice Aravind Kumar said that it is not the right time to into that issue and the investigation should get over first.

These observations were made by the High Court today, days after the Supreme Court directed it to examine the case on a periodic basis. While hearing the matter on November 21, the Top Court granted liberty to the petitioners to approach the High Court to raise their issues, either by filing an independent writ petition under Article 226 of the Constitution or by intervening in the suo motu case.

The matter has now been posted for further hearing on December 12.