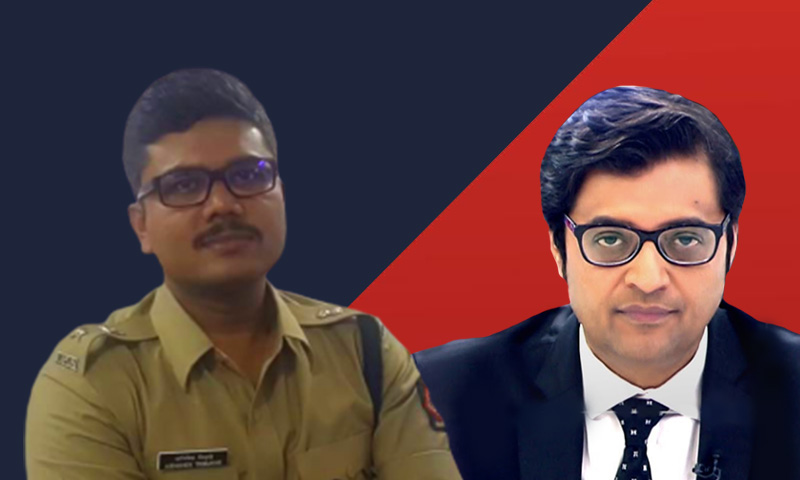 Deputy Commissioner of Mumbai Police, Abhishek Trimukhe has filed a criminal defamation complaint against Republic TV's editor- in- chief Arnab Goswami, director Samyabrata Goswami and ARG Outlier Media that runs the channel. The complaint filed in the Sessions Court, Mumbai, through the public prosecutor's office, seeks a "deterrent process of warrant" against the accused...

The complaint filed in the Sessions Court, Mumbai, through the public prosecutor's office, seeks a "deterrent process of warrant" against the accused and "compensation" for Trimukhe.

"The defamatory remarks have been made by a singular view of assassinating his(Trimukhe's) official character and thereby maliciously and deliberately causing undue humiliation of the Mumbai Police department and those who serve the public thereunder," the complaint states.

Trimukhe alleges that the defamatory remarks were made against him by Goswami during a panel discussion on Republic Bharat related to Sushant Singh Rajput's case and those remarks were then broadcast on their YouTube channel, on August 7,2020.

The panel discussion was with regard to the Call Records of actor Rhea Chakraborty, an accused in the drug case connected to the actor's death.

"However, far from being a discussion conscribed by journalistic ethos, the defamatory telecast has accused no.1 (Goswami) breaking into a tirade of defamatory statements against the complainant," the document states.

It narrates that the entire "sensationalistic approach" used by Goswami during the telecast is "unbecoming of a journalist," and was done to cause reputational damage.

Trimukhe also alleged that Goswami runs the Twitter handle @arnab5222 with nearly 2 lakh followers, and has reiterated and recirculated the defamatory telecast to an even larger audience, through Twitter.

The complaint states that ARG Outlier, which runs Republic TV/ Republic Bharat has Goswami and his wife Samyabrata as executive directors and no decision can be taken without their knowledge.

"As such the defamatory publication has been made with the wilful intention, involvement, knowledge, consent of A-2(Samyabrata), as well."

Trimukhe says he is 2007- batch IPS officer and is currently serving as the DCP, Zone IX. He describes himself as being "tough on criminals."

The complaint further notes that it is filed after sanction from the state home department.

The complaint has been filed under section 499 (defines defamation), 500 and 501 (punishment for defamation), along with section 34(common intention) of the Indian Penal Code.