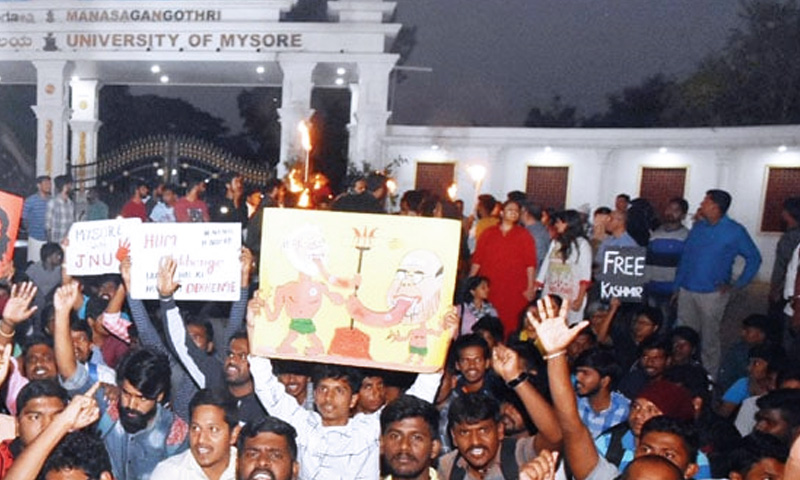 A Mysuru court on Monday granted anticipatory bail to students Nalini Balakumar and Mardevaiah Shivanna, who were booked for sedition for holding a "Free Kashmir" placard at a protest against the attack in Jawaharlal Nehru University.Their applications for pre-arrest bail were allowed Additional Sessions judge Jerald Rudolph Mendonca observing : "The quantum of punishment for the offence...

A Mysuru court on Monday granted anticipatory bail to students Nalini Balakumar and Mardevaiah Shivanna, who were booked for sedition for holding a "Free Kashmir" placard at a protest against the attack in Jawaharlal Nehru University.

"The quantum of punishment for the offence alleged is not exclusively death or imprisonment for life. The fact that she is a young woman and a student. At this stage there are no materials to show that she has any criminal antecedents or connections with the banned outfits. That she has immediately accepted that it is she who has shown the placard and has explained her stand. No loss of life or property is caused due to the act. She has been co-operating with the investigation. The apprehension that she would abscond is taken care of by imposing the conditions of surrendering of her passport."

The Court  ordered them to be released on bail on their executing a personal bond for a sum of Rs.50,000, each with one surety for the like sum in the event of their arrest by the Police.

The court directed that the petitioners should not tamper the prosecution witnesses directly or indirectly and that should co-operate with the Investigating Officer in the investigation.

Earlier, the Mysuru Bar Association had passed a resolution that none of its members would represent these petitioners in this case. In response to that, over 170 advocates from various parts of Karnataka executed vakalath for Nalini in the bail application.

The Court made certain pertinent observations about the right to freedom of speech as follows:

"The freedom of Speech is the right to form an opinion after getting the correct and full information about an issue and express the same. This would also help an individual to exercise his option if he is called upon to do so in a given situation. This is necessary for the success of democracy. Therefore, the opinion expressed must be ones own opinion and not a forced or informed opinion. As a responsible Citizen and more particularly the youth who are the future of this Country, must be cautious while exercising this freedom and expressing the opinion, whether the exercise of ones right of freedom of speech is good for the society. Because one may say he has a right or freedom to do a certain thing but must first analyze if it is good for the society and does any harm to the society by exercising the right. This is the self restraint one must have while exercising the right or freedom in the general interest of the society."

"In this case it is not the case of the Prosecution that the Petitioner had shouted slogans, but has held a placard with the words "Free Kashmir". It should also be noted that she was not in the forefront of the Protest and only a placard was visible in back row of the group of protesters but the words written were correctly visible. The person should be careful when he / she chooses the words to express one's opinion, in the present scenario where the words are interpreted or misinterpreted to suit ones own convenience and also to create a controversy and law and order problem."

Nalini soon after the incident had sought apology from the public and police.

In this regard the Court remarked :

"But I am afraid if she has sought the apologies of her parents. It is the parents who get immediately affected when their child goes astray. It is their upbringing which would be questioned or found fault with. It is for the youth like the petitioner first to be a good son and daughter to their parents and then work for a better world. Because for your parents you are the World and no one else can take your place in the family. A person who is not a good son or daughter cannot be a good citizen too. It is the duty of every citizen to respect the law and the Law Enforcement Agencies and extend their co-operation in maintaining the law and order. If the petitioner really wants to give her contribution in nation building, she should act in a more responsible way and share her experience with others as to what trauma she has to undergo so that the youth do not commit similar mistakes like her as there are many platforms or mediums more particularly social media which are used to make comments without thinking of its consequences."

The court also added a piece of advice for the youth by saying :

"The youth of the Country are full of energy and they want to fight for their rights and the rights of everybody else and they support the right and protest against the wrong. They have innovative ideas which can be used for the development of the Country. They should also not forget in their endeavour to protest against the wrong, to respect the law and the Law Enforcement Agency. If they think for a while as to what would happen if all the laws are suspended and the Police Stations are shut down only for about five minutes with prior notice, as a responsible citizen of the Country would automatically have respect for the law and the Law Enforcement Agencies.

One cannot imagine what kind of crimes would be committed if the laws are suspended and the Police abstain from their duties. The Police are not equipped with a magic wand to find out the person who has concealed himself after the commission of the crime or to find out as to whether the person brought before them has committed the crime or not. They need a reasonable time to conduct investigation and find out the real culprit. Therefore, it is the duty of every citizen to respect the law and the Law Enforcement Agencies and to see that in the protest no loss of life or property happens. The loss of life cannot be brought back and it would be a irreparable loss for the family which has lost its family members."

Precautions to be followed before organising protest.

"Before organizing the protest or join in the protest, the youth or the public should be aware of the law of the land and the direction of the Hon'ble Supreme Court more particularly in the case of Kodungalluru Film Society Vs. Union of India reported in (2018) (10) SCC 713 and also the provisions of the Prevention of Damage to Public Property Act 1984 and the rulings of the Hon'ble High Court of Kerala in the case of Shanif K. .Vs. State of Kerala in bail application No.7021 of 2018 decided on 31.10.2018 in respect of the bail application wherein the Hon'ble High Court of Kerala held that even if a peaceful protest turns into mob violence causing loss of life or damage to the public and private properties, will not be entitled for bail unless they deposit the cash towards the proportionate quantified loss caused due to such violence."