Ganga Is Nation's Lifeline But Is One Of The Most Polluted Rivers In The World, Imperative To Revive, Make It Pollution Free: Allahabad HC 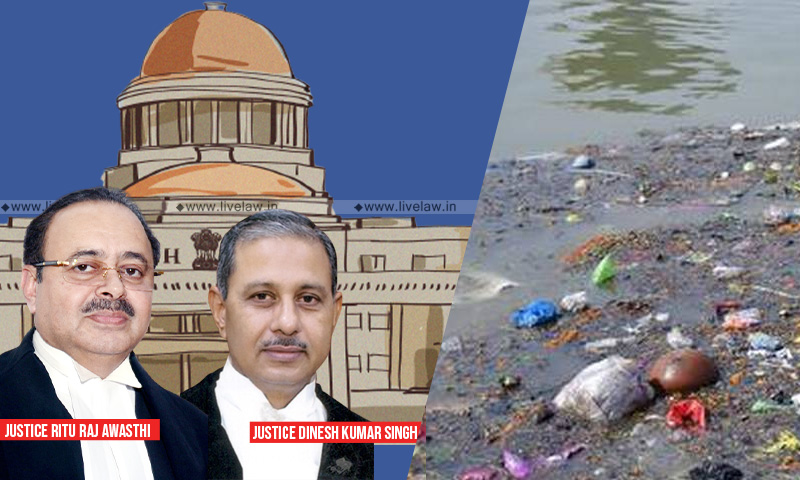 Referring to Prime Minister Narendra Modi's statement after getting elected from Varanasi Parliamentary seat in May, 2014 in which he said that it is his destiny to serve Maa Ganga, the Allahabad High Court today observed that every effort should be made to revive the river and make it pollution-free. The Bench of Justice Ritu Raj Awasthi and Justice Dinesh Kumar Singh also traced...

Referring to Prime Minister Narendra Modi's statement after getting elected from Varanasi Parliamentary seat in May, 2014 in which he said that it is his destiny to serve Maa Ganga, the Allahabad High Court today observed that every effort should be made to revive the river and make it pollution-free.

"Despite being the lifeline of the nation, having been worshiped, providing sustenance to a large population, over the time river has become highly polluted. According to the studies, it is one of the most polluted rivers in the world."

Further, the Court also noted that the future of the nation to a large extent will be depending on health and well-being of the river.

In the year 2014, the Central Government had come out with a Flagship Programme 'Namami Gange', an Integrated Conservation Mission, to accomplish twin objectives of effective abatement of pollution, conservation and rejuvenation of National River 'Ganga'.

The programme is being implemented by the NMCG and in Uttar Pradesh, UP Jal Nigam was chosen as the Executing Agency of the Namami Gange Project.

Since River Gomti is one of the tributaries of river Ganga and it is highly polluted in Lucknow city, it was decided to issue a tender for Survey, Investigation, Design, Supply, Construction, Installation, Testing & Commissioning for pollution abatement works of river Gomti.

A total of 8 bidders had applied for this project, and one among them was M/S Geo Miller & Co. Pvt. Ltd (the petitioner).

Thereafter, since only 1 bidder was found to be eligible for the project (among a total of 8 bidders), thus, UP Jal Nigam, the Executing Agency (Namami Gange project) without taking approval from the NMCG, cancelled the tender without assigning any reason.

However, having received representation from the non-selected bidders, NMCG instructed U.P. Jal Nigam not to give effect to the cancellation order and the Project Director of U.P. Jal Nigam was directed to submit the technical evaluation reports of the bidders.

The NMCG reviewed the recommendation of the technical evaluation committee and evaluated the technical bids of all eight bidders including the petitioner's bid and found two more bidders, besides the one already selected by UP Jal Nigam to be technically qualified.

That meant that the petitioner's bid was again not found responsive at the level of the NMCG as it was not technically qualified.

It is essential to note that the petitioner did not challenge the decision regarding its disqualification, rather, it challenged the decision of the NMCG giving direction to UP Jal Nigam to not give effect to Cancellation of Bids order.

Also, the petitioner challenged the grant of the contract to the successful party (respondent no. 4).

At the outset, the Court held that NMCG was well within the power to direct the U.P. Jal Nigam not to give effect to Corrigendum dated 29.07.2020 (cancelling the bid) and further direction to open the financial bids of three technically qualified bidders and proceed with the tendering process.

Further, the Court also held that once the petitioner did not challenge its disqualification, it had no locus standi to challenge the grant of contract to respondent No.4. The Court observed thus:

"Once the petitioner has not challenged his disqualification or it is not aggrieved by the decision to disqualify it, it cannot said to be a person 'aggrieved' when the contract has been awarded in favour of respondent No.4, who has been found to be technically qualified firstly, by the Committee headed by the Chief Engineer of the U.P. Jal Nigam, then by the NMCG itself. If the petitioner is not a person aggrieved, he has no right to maintain the writ petition under Article 226 of the Constitution of India as he is not prejudiced in any manner by awarding the contract to respondent No.4."

In this backdrop, the Court also remarked that even if the tendering process had been cancelled and fresh bids would have been invited, the petitioner would have only a chance of being selected and hence, the Court held that a mere chance of selection does not entail a vested right in an interested person.

Consequently, the Court found that there had been no arbitrariness or malafide or illegality in the finalization of the tender in favour of respondent No.4.

"Mission Namami Gange has huge public importance. Delay in implementing the project would not only escalate the cost but also obstruct the objective of reducing and abating the pollution level in river Gomti, which has been referred to as a stinking drainage in Lucknow City," added the Court.

"Looking at the large public interest involved, even if it is assumed that there has been some technical and procedural aberration in awarding the contract in favour of respondent No.4 but since, same has been without any malafide or arbitrariness, public interest would demand that such aberration is to be ignored."

Lastly, the respondents were directed to proceed with the execution of the work in all earnestness and promptness so that pollution in river Gomti is controlled and abated, consequently, pollution in river Ganga would also get abated, which is the main objective of 'Namami Gange Mission.