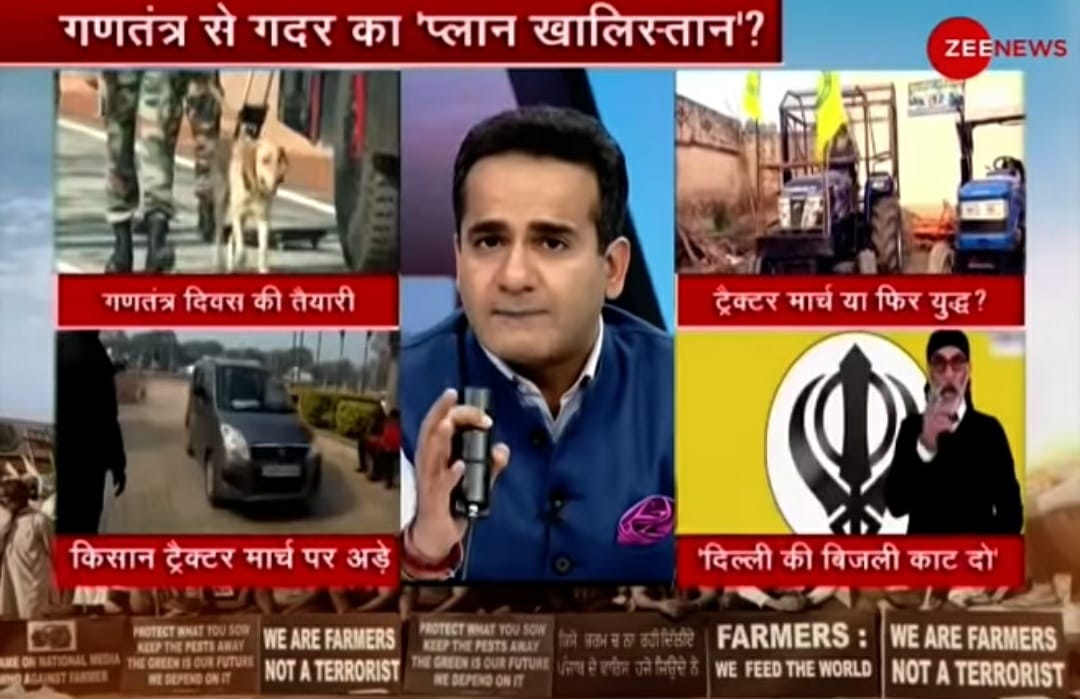 News Broadcasting and Digital Standards Authority (NBDSA), in its order November 19 found that News Channel Zee News violated the code of ethics in Three of the videos broadcast by it which linked Farmers Protests to Khalistanis.The Authority has also found that Zee News falsely reported that the Indian flag was removed from Red Fort. The authority headed by former Supreme Court...

News Broadcasting and Digital Standards Authority (NBDSA), in its order November 19 found that News Channel Zee News violated the code of ethics in Three of the videos broadcast by it which linked Farmers Protests to Khalistanis.

The Authority has also found that Zee News falsely reported that the Indian flag was removed from Red Fort.

The complaint to NDBSA stated that the programs were "designed to create undue fear and distress amongst the viewers and erode public confidence in the capacity of national institutions meant to protect them."

Another complaint was made to NBDSA regarding a program which was aired by ZEE News, wherein, as per the complaint, the anchor repeatedly stated that protesting farmers removed and threw the National Flag of India from the Red Fort in Delhi and hoisted the Khalsa flag in its place on Republic Day.

News Broadcasting and Digital Standards Authority (NBDSA) finds that #ZeeNews violated code of ethics in three videos by linking #FarmersProtests to Khalistanis & by falsely reporting that Indian flag was removed from Red Fort. NBDSA asks the videos to be taken down.#Farmers pic.twitter.com/TJiYbuQAHb

Zee News, in its response dated 24.2.2021, denied all allegations leveled and called such allegations as completely false, motivated, and based on a complete misinterpretation of the contents of the impugned broadcasts.

They contended that the first two impugned programmes contained a fair and objective panel discussion /debate on various important issues pertaining to the involvement of Khalistani elements into the farmers' protests and the third program was related to living telecast from Red Fort on 26.01.2021, wherein, certain elements hoisted the Kisan Union flag at Red Fort.

It was also stated by the news Channel that it had conducted a fair and objective panel discussion on whether the farmers should go ahead with the tractor parade in New Delhi on Republic Day, particularly when there was evidence to show the infiltration of pro-Khalistani elements in the protest.

As a responsible news channel, Zee News, in its response added, it has always raised the issues of farmers of this Country and the impugned programmes were also in the interest of the protesting farmers, so that the anti-national elements cannot take advantage of their protest.

Regarding its Republic Day broadcast, it submitted that since the impugned programme was a live telecast, the anchor, due to oversight stated that Bhartiya Kisan Union's flag was hoisted after removing the national flag instead of the fact that the national flag was disrespected. However, it submitted that it had taken immediate corrective steps by removing the impugned link.

The decision of the NBDSA

While considering the complaint, NBDSA observed that many broadcasters, during the coverage of the farmer's protest at Red Fort on January 26, 2021, had inadvertently identified the Nishan Sahib Flag (Khalsa Flag) as the National Flag.

In this regard, NBDSA noted that the broadcasters should exercise due care and caution while reporting any news pertaining to any religious symbol/flag and follow the Fundamental Principles of the Code of Ethics & Broadcasting Standards which states that "All news channels will keeping with the principle of due accuracy and impartiality, ensure that significant mistakes made in the course of broadcast are acknowledged and corrected on air immediately."

With regard to the programs telecast on 19.1.2021 and 20.1.2021 by Zee News, NBDSA noticed that the following Headlines/Taglines were used which were in clear violation of the Code of Ethics and Broadcasting Standards and Specific Guideline Covering Reportage, Fundamental Standards and Guidelines 1 and 2.

In view of the above, NBDSA, in its order, expresses its disapproval to the broadcaster on the use of the aforementioned Headlines/Taglines and decided to issue Specific Guidelines relating to broadcasting/publishing of Taglines, Hashtags and use of Images/Photographs.

In view of the above, NBDSA, therefore, directed Zee News to immediately remove the video of the said broadcast, if still available on the website of the channel, or YouTube, or any other links, immediately, and confirm the same to NBDSA in writing within 7 days.