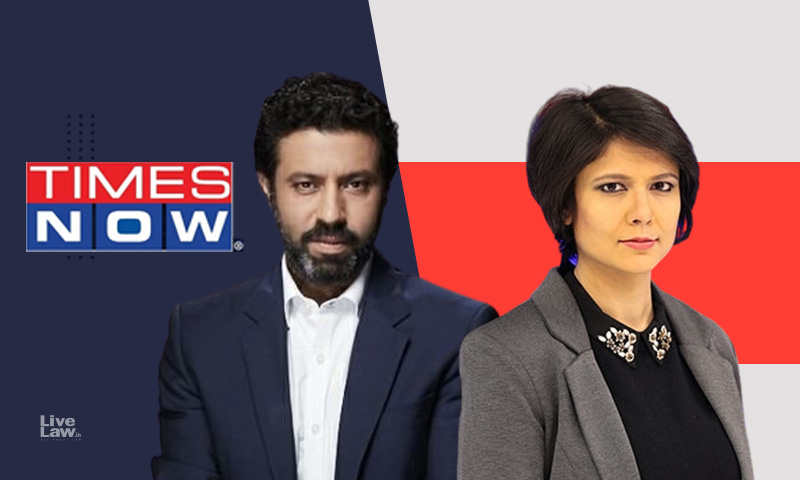 "Anchor of any program should avoid pushing any agenda in the debate," observed the News Broadcasting & Digital Standards Authority (formerly known as NBSA), in order against TimesNow. NBDSA observed that two of the TimesNow Prime Time Debate were not objective and impartial, thus have violated the broadcasting guidelines. The decision arose in a complaint against the news channel's Primetime Show 'India Upfront,' titled "Shocking Secret admission out in Umar's arrest, Does leave lobby know the truth Delhi riots key witness intimidated, threat linked to kingpin?" and "Delhi Riots: Plot to Kill Cops & Kaafirts Exposed: Peaceful Protest A Facade?"

Justice A.K. Sikri (Retd.), Chairperson of NBDSA, also issued guidelines relating to Anchors conducting programs, including debates to ensure that the broadcaster complies with the Code of Ethics and Guidelines issued by NBDSA.

The complainant has been filed against two anchors- Rahul Shivshankar and Padma Joshi. The crux of the allegation is that Times Now Channel has not covered the Delhi Riots investigation in a fact-based manner. It further said that the news channel is selectively choosing to filter and update the viewers on the observation of the Court, the Police, and other information regarding anti CAA protestors to unduly influence socio-political narratives, thereby developing hostilities against individuals with a different socio-political understanding of communalism and its agent.

Advocate Utkarsh Mishra, the complainant, alleged that the coverage was done to target a community critical of the Delhi Police's investigation and project them and their critique in a negative light, thereby infringing the viewer's right to have a fact-based view on the matter.

It further states that the journalist intended to hinder one side of a controversial public issue, violating Fundamental principle 4 of the Code of Ethics. Since their last primetime broadcast, it was brought to light that TimesNow did not report other judicial observations and information. It is the claim of the complainant that the said information was critical for a viewer to develop an unbiased opinion of the case. However, the news channel chose to report unverified allegations over judicial observations.

The complaint further alleges that the channel journalist valorized the Delhi Police's investigation, facing serious charges of conspiracy in the crime. Therefore, such a reporting violated impartiality and objectivity. A similar attempt is alleged on the news channel to dismiss the charges of hate speech against Kapil Mishra.

It was prayed that the anchor has violated: (i) Section 5 of the Cable television network regulation and Section 6(d) of the Cable television network rules; (ii) Fundamental Principles No. 4,5, and 6 of the NBSA guidelines; (iii) Principle 2 of the self-regulation of the NBSA guidelines; (iv) Entirety of NBSA's Specific Guidelines for Reporting Court Proceedings; (v) Section 3 of the Guidelines to prevent communal color in reporting.

In response, the broadcaster denied all the allegations calling it 'unnecessary, frivolous and whimsical.' It claimed the constitutional protection under Article 19(1)(a) relating to free speech and expression. It says to have disseminated the news debate in the public interest and following the relevant principles and guidelines.

After calling a hearing on the matter, the NBDSA decided that the broadcaster undoubtedly has the right to conduct a debate on any subject of its choice; however, the Anchors of the impugned programs did not conduct the debates impartially and objectively and had therefore violated the Fundamental Principles as enumerated in the Code of Ethics and Broadcasting Standards and various Guidelines issued by the Authority.

It also directed that the video of the said broadcasts be removed immediately from any website, social media channels and streaming platforms.