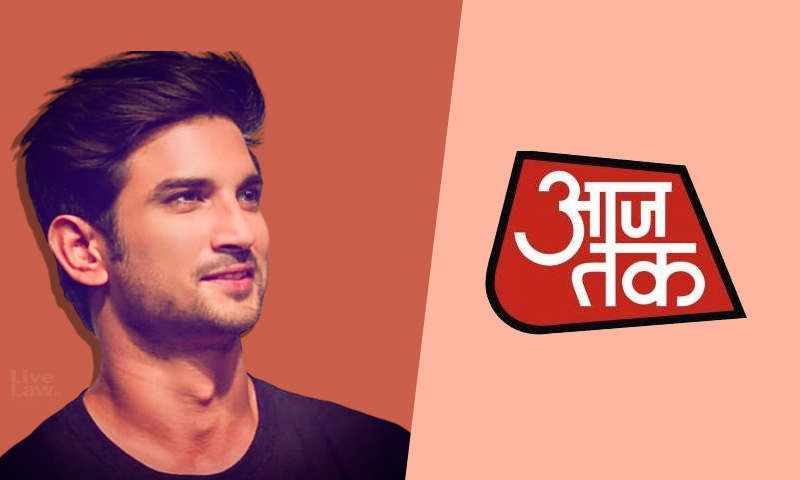 Rejecting Aaj Tak channel's review petition, the News Broadcasting Standards Authority (NBSA) has asked Hindi news channel 'Aaj Tak' to air an apology on April 23 at 8PM for its misreporting in relation to the death of film actor Sushant Singh Rajput.The NBSA affirmed its earlier order passed on October 6 last year in which it was found that the channel had violating broadcasting norms...

The NBSA affirmed its earlier order passed on October 6 last year in which it was found that the channel had violating broadcasting norms by erroneously reporting certain tweets as the final words of Sushant Singh Rajput.

The authority has requested Aaj Tak to air an apology onon 23.4.2021, at 8.00 pm, the following text (static), on full screen in large font size with voice over (in slow speed) :

[Text to be translated in Hindi]:

Aaj Tak apologises that while reporting on the incidents relating to the suicide of Sushant Singh Rajput, we had run certain tweets on Aaj Tak channel and wrongly reported the screenshots calling them real and attributing them as the actor's last tweets. By doing so, we have violated Clause 1 of the "Specific Guidelines Covering Reportage" relating to "Accuracy" which states that information should be gathered first-hand from more than one source, if possible; reports received from news-agencies should be attributed and where possible be verified; allegations should be reported accurately as made and errors of fact should be corrected at the earliest, giving sufficient prominence to the broadcast of the correct version of fact(s)

The channel has also been asked to pay a fine of Rupees One Lakh.

The original order of October 2020 against Aaj Tak was passed in a complaint filed by film producer Nilesh Navalakha, represented by Advocates Rajesh Inamdar and Shashwat Anand. As per the original order, the channel was asked to telecast the apology on October 27.

#SSRCase : NBSA directs "Aaj Tak" channel @aajtak to air an apology on October 27 at 8 PM and to pay a fine of Rs One Lakh for attributing fake tweets to late actor #SushantSinghRajput and reporting them as his last tweets. pic.twitter.com/LvsKBrbSeD

Meanwhile, Aaj Tak filed an application seeking review/recall of the order, contending that complainant had failed to provide any details of the impugned broadcast. It was argued the complainant had only provided a link of fact checking website www.boomlive.in which had mentioned the alleged report of Aaj Tak. Therefore, it was argued that the complaint was itself not maintainable.

The NBSA said that there was no substance in the review petition. It said that in a review proceeding, fresh arguments cannot be raised. Aaj Tak had not raised these arguments in the original proceedings, though it had the opportunity to do so.

"It may be noted that additional/ new pleadings and submissions cannot be raised while seeking a review/ recall of an Order. On these grounds, NBSA rejects the review application and decides that the broadcaster be directed to air the apology on the date and time that would be intimated to the broadcaster and also remit the fine imposed as directed", the order said.

The NBSA also noted that the channel has not complied with the original order to air apology on October 27, and has asked to do it on April 23.

Other news channels like Zee News, India TV,  News 24 were also found guilty of violation of journalistic norms by the NBSA for insensitive reporting of Sushant Singh Rajput's death.