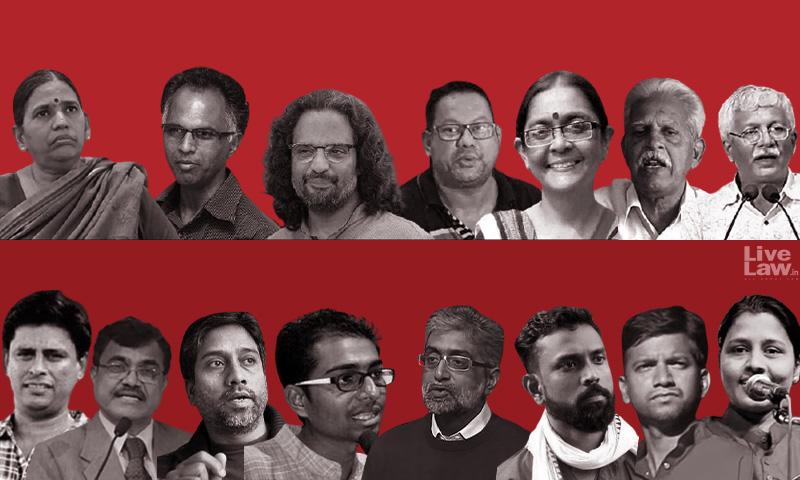 x
The NIA Draft Charges find mention of a common objective to establish 'People's Government' through revolution & protracted arms struggle and an attempt to cause the death of a public functionary.

The National Investigation Agency submitted a list of seventeen draft (proposed) charges against the Bhima Koregaon-Elgar Parishad Case accused, including the charge of waging a war against the country, which is punishable with death. The draft charges don't mention a plot to assassinate Prime Minister Narendra Modi, as claimed in 2018 but mention "cause the death of a...

The National Investigation Agency submitted a list of seventeen draft (proposed) charges against the Bhima Koregaon-Elgar Parishad Case accused, including the charge of waging a war against the country, which is punishable with death.

The draft charges don't mention a plot to assassinate Prime Minister Narendra Modi, as claimed in 2018 but mention "cause the death of a public functionary."

The draft charges state that the accused are members of the banned CPI(Maoist) and its front organisations whose main objective is to establish "Jantana Sarkar" i.e. 'people's Government' via revolution supported by a commitment to protracted armed struggle to undermine and to seize power from the State.

It states the accused "abetted and assisted" unlawful activities to threaten the unity of the country strike terror in the people, using explosive substances, transporting sophisticated weapons like Chinese QLZ 87 Automatic Grenade Launcher and Russian GM-94 Grenade Launcher…likely to cause death or injuries to any person and was an attempt to do or cause the death of public functionary.

The accused conspired to demand and organise Rs 8 crore for the weapons, the draft charges add.

NIA alleged that pursuant to the conspiracy, the Elgar Parishad event was organised by Kabir Kala Manch a 'front' organisation of CPI(M) on December 31, 2017, in Pune, that led to the caste violence at Bhima Koregaon the following day that resulted in the death of one person.

"…to exploit the communal sentiment of Dalit and other classes across the state and provoked them in the name of caste in order to create violence, instability and chaos in District Pune, at various places including Bhima Koregaon and in the state of Maharashtra," the draft charges state.

In 2019, the Pune Police investigating the case, before the NIA took over in 2020, had mentioned a plot to "assassinate Prime Minister Narendra Modi" in its list of draft charges. They cited an email written by a certain 'R' to Comrade Prakash on April 18, 2017, about a "Rajiv Gandhi-type" operation.

However, NIA's 10,000-page charge sheet and now its draft charges submitted in a special NIA court on August 9 are silent on this specific claim.

Based on these draft charges, a Special Court will decide the IPC and UAPA offences under which the accused - 15 activists, lawyers and academics will stand trial.

NIA's case against the 15 is primarily based on letters retrieved from accused researcher Rona Wilson and co-accused advocate Surendra Gadling's computer.

However, Wilson has approached the High Court earlier this year to quash the case against him after a digital forensics consulting company in the USA, concluded his computer was infected with malware, called NetWire (available for $10 online), and all the incriminating evidence was planted on it over a period of two years before his arrest on June 6, 2018.

The hundreds of people visiting the war memorial at Bhima Koregaon was attacked on January 1, 2018, after violence erupted. They were mostly from the Dalit community and one died in the stone-pelting.

An FIR was registered regarding the violence the same day.

Another FIR by right-wing activist Tushar Damgude, was filed on January 8, 2018, and pursued. The houses of several activists, including Rona Wilson's and advocate Surendra Gadling were searched on April 17, 2018.

The scope of the investigation was eventually widened, with the Pune police claiming retrieval of incriminating documents in the form of electronic records. NIA took over the case in 2020.