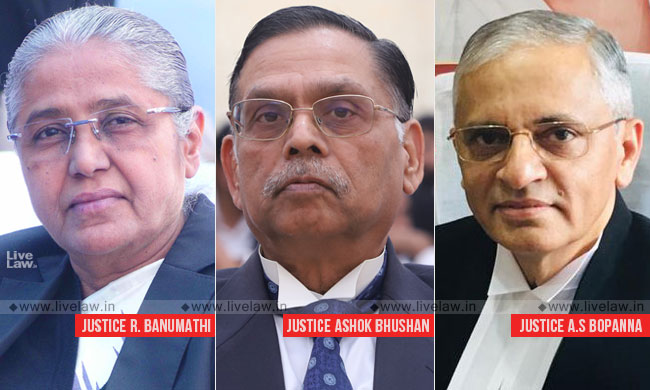 A three Judge Bench comprising of Justices R Banumathi, Ashok Bhushan and AS Bopanna will hear at 10.30 am Tomorrow the review petition of Akshay Kumar Singh, one of the four death row convicts in the Nirbhaya gang rape -murder case.

This was after CJI Bobde happened to spot the name of his nephew, Advocate Arjun Bobde, in the orders of the review petitions filed by the other three convicts.

Arjun Bobde had appeared for the victim's family in those proceedings. CJI said that he will constitute another bench for hearing the matter tomorrow at 10.30 AM.

Justices R Banumathi and Ashok Bhushan were also part of the present bench.

Before the CJI announced his recusal, the bench had heard Akshay Kumar Singh's lawyer A P Singh for a short while. The counsel submitted that there was a lot of "public, political and media pressure" in the case.

The review petition is quite belated, as the SC had upheld the death penalty in May 2017.

The Supreme Court had dismissed the review petitions of the other three death row convicts - Mukesh Kumar, Vinay Sharma and Pawan Kumar Gupta- in July 2018. The death penalty was upheld by a bench of Justices Dipak Misra, Banumathi and Ashok Bhushan.

In a voluminous judgement affirming death penalty, the bench had held the attitude of offenders as "beastial proclivity" and said "It sounds like a story from a different world where humanity is treated with irreverence."

"If the dreadfulness displayed by the accused in committing the gang-rape, unnatural sex, insertion of iron rod in the private parts of the victim does not fall in the 'rarest of rare category', then one may wonder what else would fall in that category. On these reasoning recorded by me, I concur with the majority in affirming the death sentence awarded to the accused persons", Justice Banumathi observed in the judgment.

Considering the "gravity of the case and questions of law involved", the SC bench had appointed two senior Supreme Court lawyers- Raju Ramachandran and Sanjay Hegde to argue the appeals filed by the four convicts.