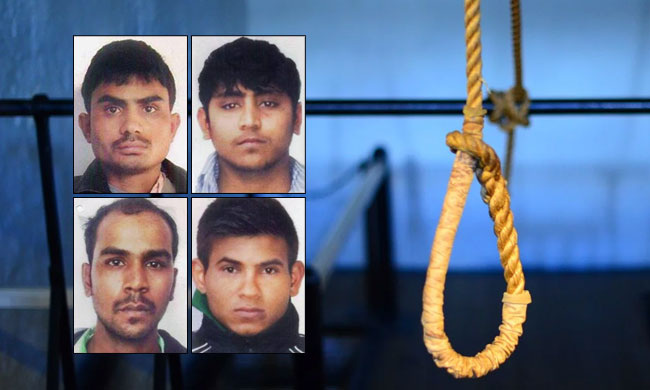 Sessions Judge Satish Arora at Patiala House Court on Thursday asked Tihar Administration to file a report mentioning the steps taken by them, after the filing of mercy plea by one of the convicts.The court has asked the authorities at Tihar to intimate the court about the procedure followed under Rule 840, read along with Rule 863, of the Delhi Prison Rules, 2019.The direction has come after...

Sessions Judge Satish Arora at Patiala House Court on Thursday asked Tihar Administration to file a report mentioning the steps taken by them, after the filing of mercy plea by one of the convicts.

The court has asked the authorities at Tihar to intimate the court about the procedure followed under Rule 840, read along with Rule 863, of the Delhi Prison Rules, 2019.
The direction has come after an application was filed by Advocate Vrinda Grover seeking a stay on the date of execution set by the court by an order dated January 7, 2020.
In that order, the court had scheduled the date of execution to be January 22, 7 am.
In today's hearing, Miss Grover informed the court that she's not challenging the legality of the order passed by this court on January 7.
She submitted that all that she's arguing is that the scheduled date of execution, as mentioned in that order, has become non-executable as the Petitioner Mukesh has already filed his mercy plea.
As per her submissions, the mercy plea of Mukesh is pending before two authorities: Lieutenant Governor of Delhi, and the President of India.
I'm furtherance of her plea, she cited the judgment of the Supreme Court in Shatrughan Chauhan v. Union of India, as well as Rules 840 and 863 of the Delhi Prison Manual, to argue that the Petitioner can't be executed without being given a notice of minimum 14 days after the rejection of the mercy plea.
The argument regarding the stipulation of the 14 days period to start post the rejection of the mercy plea, was also agreed upon by the Prosecutor.
Therefore, it had become amply clear during the proceedings, that the Petitioner can't be executed on the scheduled date of January 22.
The court was also informed by the Tihar Authorities that they've sought further orders from the Delhi Government on the issue of staying the execution date, as per Rule 840 of the Prison Manual.
However, the court was not satisfied by their intimation. The judge was also dissatisfied by the fact that the authorities had to wait for an application to be moved by a death row convict, in order to inform the court about the subsequent developments in his legal redressal.
It was also observed that the very fact that the High Court had granted liberty to the Petitioner to approach the Sessions Court, goes on to show that the said court wanted the Sessions Court to be aware of the subsequent developments in the case.
Having made such observations, the court directed the Tihar Authorities to submit a complete report regarding the steps taken by them under Rule 840, read along with Rule 863, of the Delhi Prison Rules, 2018.
TagsNirbhaya Case Death Penalty Mercy Plea #Mukesh Patiala House Court
Next Story
Similar Posts
+ View more
Law Firms
+ More

Maintainability Of Writ Petition Against A Party That Ceases To Be "State"
Latest News
+ More
1Order VIII Rule 1A(3) : Refusing To Permit Production Of Additional Documents Even If There Is Some Delay Will Be Denial Of Justice: Supreme Court
2Gujarat HC Affirms Regularisation Of Sweeper Working Around 8 Hours A Day For Over 30 Years
3Holding Hands Of A Child & Saying That They Are Beautiful Cannot Be Considered As A 'Sexual Assault' Under POCSO Act: Meghalaya HC
4Speedy Investigation : Karnataka High Court Sets Time Limit For Probe; 60 Days For Petty Offences, 90 Day For Heinous Crimes
5Mumbai Police Registers FIR Against BJP Spokesperson Nupur Sharma Over Comments On Prophet Mohammed
6Why So Much Confusion Around The Jurisdictional Issue Under Personal Insolvency
7Jurisdiction Under Article 227 And Orders Of The National Consumer Disputes Redressal Commission ;A Snapshot
8Arbitration Cases Weekly Round-Up: 22nd May To 28th May, 2022
लाइव लॉ हिंदी
+ More
International
+ More
1Life Imprisonment Without Realistic Possibility Of Parole Unconstitutional: Canada Supreme Court
2Is The Green Hydrogen Policy A Viable First Step Towards Power/Energy Security?
3Abortion Laws In The US And Other Countries
4Leaked Draft Judgment Of US Supreme Court Indicates Overruling Of Roe v.Wade Abortion Rights Decision
Environment
+ More
1Supreme Court Permits E-Rickshaws In Matheran As Pilot Project To Check Feasibility
2In Case Of Doubt, Protection Of Environment Would've Precedence Over Economic Interest: SC Revokes Approval For Doubling Castlerock to Kulem Railway Line
3NGT Bars Auroville Foundation From Township Construction Till Environmental Clearance Is Obtained
4Ghazipur Landfill Fire: NGT Says Dump Sites In Cities Are Like 'Time Bombs', Constitutes Joint Committee Headed By Former Delhi High Court Judge