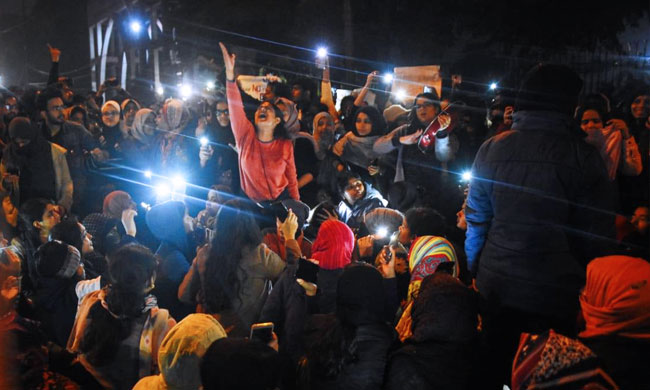 Condemning the alleged police brutalities on the students in Delhi, Aligarh, Assam and other universities across India, during the anti-CAA protests, alumni of National Law Institute University Bhopal has issued a statement. Slamming state sponsored action at temples of education, the statement issued by over 100 alumni read, "The events of the recent past also represent a...

Condemning the alleged police brutalities on the students in Delhi, Aligarh, Assam and other universities across India, during the anti-CAA protests, alumni of National Law Institute University Bhopal has issued a statement.

Slamming state sponsored action at temples of education, the statement issued by over 100 alumni read,

The alumni condemned the enactment of the "egregiously discriminatory" Citizenship Amendment Act, 2019 and the proposal to implement the NRC nation-wide. They view these enactments as "attempts to attack the touchstones of constitutional ethos including, diversity, inclusivity, pluralism and secularism".

"The CAA draws distinctions based only on religion and ethnicity. A combination of the NRC and the CAA, apart from being unconstitutional, will result in onerous requirements for the proof of legitimate citizenship on persons from marginalized communities, particularly religious minorities," they asserted.

The nights of 15th and 16th December, 2019 allegedly witnessed excessive use of force on behalf of the Police in Delhi and Aligarh, followed by imposition of curfew, deployment of the army and crackdown against dissenters across the country.

"We recognize that dissent is the backbone of a democracy and that freedom of speech is one of the most cherished rights in a diverse and inclusive society. We therefore stand in solidarity with the protestors and students at Jamia Milia Islamia, Aligarh Muslim University, Dibrugarh University, Gauhati University, Cotton University, Assam, as well as students protesting the CAA, NRC and majoritarian thought in university campuses across India, and affirm the rights of peaceful assembly and the freedom of thought, speech and expression enshrined in the Constitution of India and various international human rights laws that bind India."

Ever since the protests took a violent turn, various students and law scholars have expressed their solidarity with the protestor students. Earlier, a joint statement was issued by the student bodies of NLS, NUALS, NALSAR, MNLU Mumbai, MNLU Nagpur, NLUO, HNLU and NUSRL expressing solidarity with the students of Jamia Milia Islamia (JMI), Aligarh Muslim University (AMU), Jawaharlal Nehru University (JNU), and the Arts Faculty of Delhi University (DU). Similar statements were issued by the Student Council of NLUD, the Legal Aid Clinic of Jindal Global Law School and the Students and Alumni of Symbiosis, ILS, GNLU, NUJS, NLUJ & TNNLU. The Student Union of Campus Law Centre, Faculty of Law, Delhi University issued a statement condemning the Citizenship (Amendment) Act, 2019.

Students and alumni from 19 Foreign Universities including Harvard and Yale had also expressed solidarity with Jamia, AMU students.