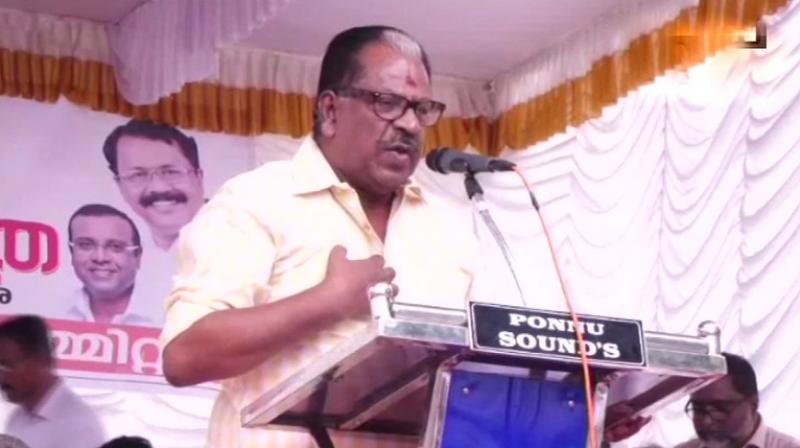 x
"Just as liberty is precious to the petitioner, so is the society's interest in maintenance of peace, law and order. Both are equally important."
Your free access to Live Law has expired
To read the article, get a premium account.

The Kerala High Court, last Thursday, rejected anticipatory bail plea of film actor Kollam Thulasi who made grossly derogatory and violence inciting speech against women who are desirous of entering the Sabarimala Temple.

During a meeting held in to protest against Sabarimala verdict allowing young women to enter the shrine, Thulasi, had exhorted the people to rip those women, who dared to visit the Temple, into two pieces and to send one piece to the office of the Chief Minister and the other piece to Delhi, apparently to the Supreme Court. He also made derogatory remarks against the judges of the Supreme Court who rendered the verdict.

Seeking anticipatory bail, he approached the High Court and his council submitted that his client who is 70 year old citizen, suffering from different ailments, was carried away by the frenzy and when, on introspection, he realized that he had way too exceeded in speaking in the manner that he did, he duly issued an apology.

The public prosecutor strongly opposed the plea contending that Thulasi, who is a person commanding respect from a certain section of the community, had in a grossly offensive, violent and reprehensible manner exhorted the people to take up violence against women. According to him, it was an impetus to anti-social elements to create unrest in the State.

Justice Raja Vijayaraghavan V observed that words chosen by Thulasi were provocative, violent and deliberately intended to cause peace and unrest in the State and to turn people to violence in the name of Lord Ayyappa.

"The speech rendered by the petitioner is still in the public domain. As narrated above, the petitioner had exhorted the public to tear those women, who plan to visit the Temple, into two pieces and also told them the manner by which the pieces are to be disposed of. He has also used certain grossly offensive words while referring to the Judges of the Apex Court. It is evident that those words were deliberately used by the petitioner to incite violence. The words chosen was provocative, violent and deliberately intended to cause peace and unrest in the State and to turn people to violence in the name of Lord Ayyappa. The women devotees, who would have had plans to visit the shrine, would have been appalled by the call for violence. Furthermore, the learned Public Prosecutor has produced materials to show that not less than 1000 crimes were registered in various parts of the State of Kerala consequent to the violence unleashed purportedly to maintain the sanctity of the Lord's Temple. Massive loss was caused to the State and private individuals due to the destruction of public and private property by antisocial elements of the society, who have no regard for law. It would be futile for the petitioner to contend at this stage that none of the offences alleged against him will be made out." the Court said.

Dismissing his application, the court said: "Just as liberty is precious to the petitioner, so is the society's interest in maintenance of peace, law and order. Both are equally important. The petitioner, who has maliciously and with deliberate intent incited violence and exhorted likeminded people to harm women, cannot claim himself to be victim and seek for discretionary relief. As any other right minded citizen, the petitioner was expected to exercise care and caution in his acts and words."