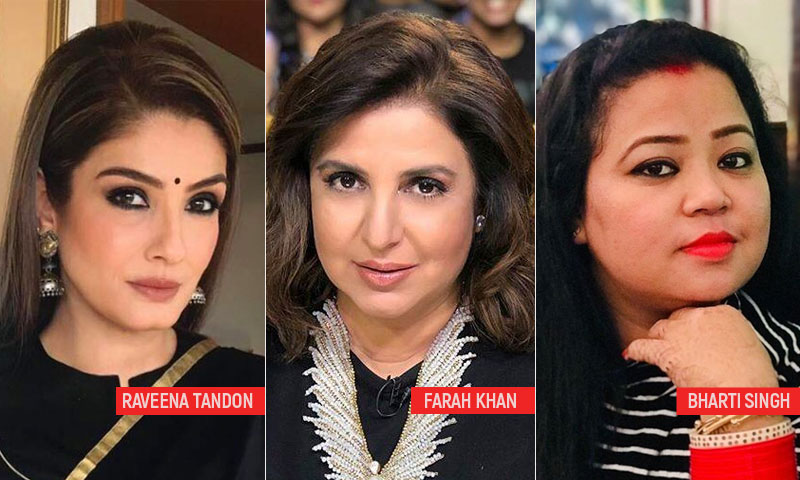 The Punjab and Haryana High Court on Thursday directed the State of Punjab not to take "coercive steps" against Bollywood actress Raveena Tandon, filmmaker Farah Khan and comedian Bharti Singh on their plea, seeking quashing of two separate FIRs registered against them for allegedly hurting religious sentiments during a web show titled as 'Backbenchers'...

The Punjab and Haryana High Court on Thursday directed the State of Punjab not to take "coercive steps" against Bollywood actress Raveena Tandon, filmmaker Farah Khan and comedian Bharti Singh on their plea, seeking quashing of two separate FIRs registered against them for allegedly hurting religious sentiments during a web show titled as 'Backbenchers' released by Flipkart.

The show Backbenchers, which was launched on October 19, 2019, is a one-of-its-kind non-scripted comedy-based web quiz show hosted by Bollywood director Farah Khan. The show invites some of the Bollywood and Sports' finest and tests their general knowledge through several rounds of written and oral tests.

The alleged incident arose from an unintentional conversation during the quizzing of the two participants, Raveena Tandon and Bharti Singh by the host Farah Khan at Mumbai on 30th November 2019 in 14th episode of Back Benchers. In the show Raveena Tandon and Bharti Singh were asked by the Farah Khan to spell the word "Hallelujah" and also to disclose its meaning by narrating the same. While Raveena Tandon spelled it correctly but did not explain its meaning or narrate anything as regards to the word, Bharti Singh not knowing the origin and context of the word, mis-spelled it and referred it to an identical word in Hindi, of which only the pronunciation resembled.

A total of 13 FIRS have been registered in Punjab and Maharasthra wherein allegations were raised that the said show have made a joke of the word "Hallelujah" and have played with the religious sentiments.

Quashing petitions were filed before the Punjab & Haryana High Courts at Chandigarh through Advocates Abhinav Sood, Gaurav Girish Shukla and Pallav Mongia under Section 482 of the Code of Criminal Procedure, praying for quashing of the FIRs registered at Police Station City Rupnagar, District Rupnagar and at Police Station Cantt. Ferozepur, District Ferozepur where Raveena Tandon , Farah Khan & Bharti Singh have been arrayed as accused.

On Thursday, Advocate Abhinav Sood argued that none of the ingredients of the alleged offence under Section 295A of hurting the religious sentiments have been made and there was no deliberate and malicious intention by anyone of outraging the religious feelings of a class.

It was further argued that the allegations are "unjustified, false and incorrect". It was submitted Tandon , Farah Khan and Bollywood personality Bharti Singh were asked to spell a word and to-explain its meaning. While Tandon spelt it correctly, Bharti Singh misspelt it. It apparently meant that Bharti Singh did not know the word and was referring to another word in Hindi.There was nothing that could lead to the presumption that the act was intended to hurt the religious sentiments of a community, Sood told the court. Their act did not even remotely qualify to constitute an offence under Section 295-A of the Indian Penal Code.

The Punjab and Haryana High Court while issuing notice has directed that no coercive steps shall be taken by the State of Punjab against the petitioners in both the Ferozpur and Rupnagar FIR's. The matter is adjourned for 25th March 2020 for further proceedings