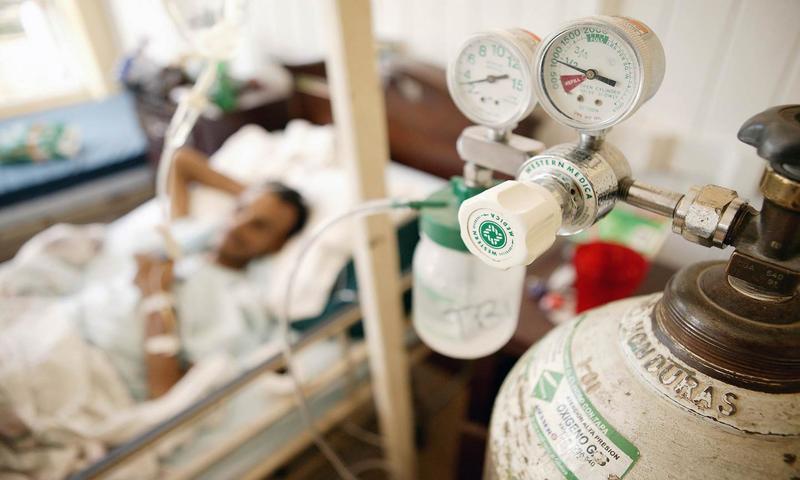 The Delhi Police has told a Delhi Court that no deaths were caused due to oxygen shortage in the Jaipur Golden Hospital in the intervening night of 23rd and 24th of April where several patients allegedly lost their lives due to oxygen shortage.The status report has been filed by the Police in a plea seeking registration of FIR for the offence of murder against the management of Jaipur...

The status report has been filed by the Police in a plea seeking registration of FIR for the offence of murder against the management of Jaipur Golden Hospital.

"During enquiry the CCTV footage intervening night of 23/24.04.21 the death summaries of deceased persons, who expired on the intervening night of 23/24.4.2021 including Mrs. Tanuja Vidyarthi were obtained from Jaipur Golden Hospital. On scrutiny of death summaries of all deceased persons, it revealed that no death of any patient caused due to shortage of oxygen." the report reads.

According to the report, it has been stated that the opinion regarding medical negligence with respect to the allegations against doctors and medical staff, if any, has been sought from the Delhi Medical Council and the same is awaited.

During enquiry, notice was issued to the Hospital under Section 91 of CrPC seeking death summaries of deceased persons on the intervening night of 23rd and 24th April.

Replying to the said notice, Jaipur Golden Hospital has stated that there was no refill by INOX at the schedule time i.e. 5:30 PM on 23rd April, 2021 which resulted in a crisis situation.

"After initial scrutiny of patient's death related reasoning, prima facie at that moment, it appeared that in four cases there was drop of oxygen pressure around 9:45 PM on 23/04/2021, which is an unusual occurrence in such numbers. However, it is also a fact that these patients were on ventilator (NIV)", the hospital said.

"It was only in the above circumstances, that the hospital sought to draw a linkage between the oxygen supply and the increased casualties. Accordingly, the hospital expressed a legitimate concern and raised alarm bells in the wider public interest to ensure and ascertain non-interrupted oxygen supply for other admitted patients." the hospital said further.

The development came after Metropolitan Magistrate Vivek Beniwal last month granted one last opportunity to the Delhi Police for filing an action taken report or status report in the matter.

Filed through Advocates Sahil Ahuja and Siddhant Sethi, the plea had been moved on behalf of six family members of the deceased patients alleging that Jaipur Golden Hospital's management should be punished and that they should be charged with offences including murder, criminal intimidation, death by negligence, criminal conspiracy etc.

Stating that the Court must take cognizance of the aforesaid charges, the plea also alleges that the Police, with a mala fide intention, did not arrest or set up an inquiry against the management of the Hospital.

The plea also avers that by not providing proper oxygen support to the patients leading to their death makes it an act which amounts to culpable homicide.