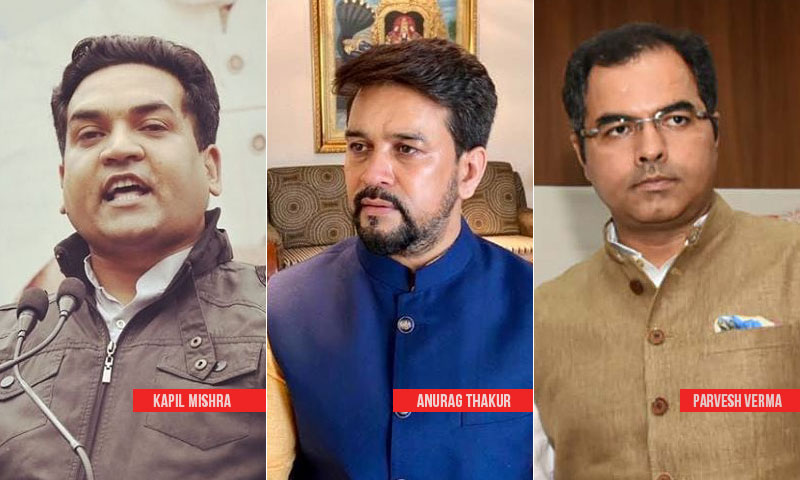 The Delhi Police has submitted an affidavit before the Delhi High Court claiming that no evidence has surfaced so far to indicate any role played by BJP leaders Kapil Mishra, Anurag Thakur and Parvesh Verma in either instigating or participating in the Delhi Riots.The affidavit sworn by Rajesh Deo, Deputy Commissioner of Police, Legal Cell(Police Head Quarters) also stated that if any...

The Delhi Police has submitted an affidavit before the Delhi High Court claiming that no evidence has surfaced so far to indicate any role played by BJP leaders Kapil Mishra, Anurag Thakur and Parvesh Verma in either instigating or participating in the Delhi Riots.

The affidavit sworn by Rajesh Deo, Deputy Commissioner of Police, Legal Cell(Police Head Quarters) also stated that if any evidence is found linking the alleged offensive speeches with riots, appropriate FIRs would be filed immediately.

The affidavit is submitted before the Division Bench of Chief Justice DN Patel and Justice Prateek Jalan in response to a batch of writ petitions seeking registration of FIRs in respect of statements which allegedly instigated riots in North Eastern parts of Delhi during the last week of February.

The Crime Branch has further submitted that 751 criminal cases under various provisions of Indian Penal Code, Arms Act and Prevention to Damage of Public Property Act, UAPA have already been registered as well as three SITs headed by DCPs have been constituted to investigate heinous cases.

The affidavit further claims that the prima facie investigation has revealed that the said riots did not occur due to any "sporadic or spontaneous violence" but appears to be a part of a well thought of "conspiracy to destabilise the harmony in the society".

While arguing that the Petitioners are attempting to achieve some 'undisclosed agenda', the Crime Branch has submitted that the riots were carefully engineered and funded by 'mischievous elements' and 'fringe groups', who, in pursuit of their motivated hidden agendas, instilled a false fear and panic in the minds of a section of society and instigated them to take law and order in their hands and resort to violence.

'Petitioners have selectively chosen certain speeches and incidents to further their hidden agenda. It is stated that the selective outrage by the petitioners towards specific incidents, while ignoring other abhorrent incident of violence, itself manifest that the present petitions are not bonafide but motivated. It is the bonafide belief of the deponent that the present case is nothing but repetition of the same mischief which was called out and cautioned by the Hon'ble Supreme Court in the case of Tehseen Poonantalla u. Union of India.'

While claiming that he Petitioners are trying to take the court's attention away from the true and correct facts, Crime Branch has argued that the use of terms like 'political vendetta', 'state sponsored pogrom', 'persecution' and 'malicious prosecution' etc. clearly appears to be part of some undisclosed agenda when facts clearly show otherwise and clearly reflect lack of bonfides.

'... exercising the fundamental right of dissent is and should be respected. However, no person can be allowed to commit breach of law, indulge in violence, arson and riotous activity causing danger to life, limb and property of innocent citizens under the garb of exercise of fundamental right of free speech and assembly. I respectfully state and submit that the encroachment and blockage of public roads is certainly not a facet of fundamental right of protest.'

The report has also provided information about the number of FIRs registered and the progress made in the investigation. It is also claimed therein that the police acted promptly in making humanitarian assistance accessible to the victims.

Finally, it is submitted that in guise of PIL, some of the petitioners have been surreptitiously seeking to make prayers for orders which are in the nature of anticipatory bail and/or for quashing of the FIR.

The said prayers, it is argued, are being made by activists or completely unrelated persons in an "utter abuse" of the PIL jurisdiction of the court.

On February 26, a bench headed by Justice Dr. S Muralidhar had played the videos containing the alleged inflammatory speeches of Kapil Mishra for the viewing of police officers.

The bench later directed Delhi police to take a decision within a day on the complaint made by social activist Harsh Mander seeking registration of FIRs against the leaders for alleged provocative speeches.

Next day, the Solicitor General told the Court that the Delhi police has decided to defer the decision on FIR as the riots situation was not "conducive" for registration of the same.