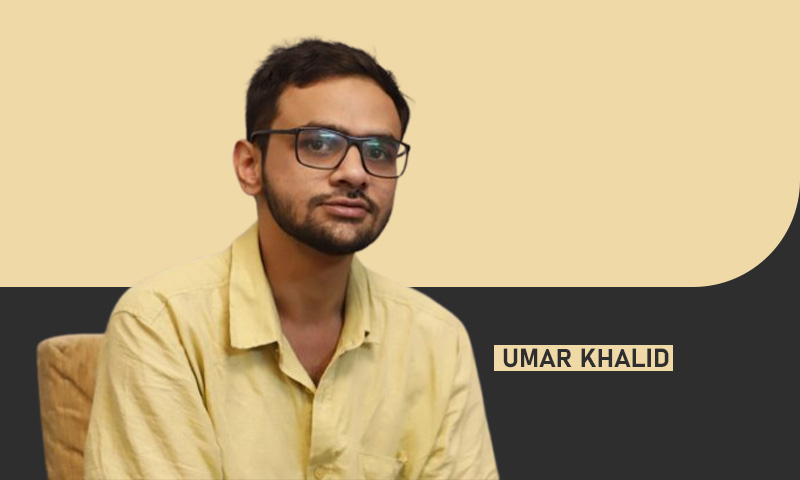 In relation to the Delhi riots larger conspiracy case involving charges under Indian Penal Code and UAPA, a Delhi Court has recently clarified that there is no order regarding production of former JNU student Umar Khalid in handcuffs."For the record, it is made clear that there is no order from this court regarding production of accused Umar Khalid in handcuffs and this order shall...

In relation to the Delhi riots larger conspiracy case involving charges under Indian Penal Code and UAPA, a Delhi Court has recently clarified that there is no order regarding production of former JNU student Umar Khalid in handcuffs.

"For the record, it is made clear that there is no order from this court regarding production of accused Umar Khalid in handcuffs and this order shall be strictly complied with without any fail," Additional Sessions Judge Amitabh Rawat clarified in an order passed on March 7.

This comes after a plea was moved by Umar Khalid seeking a departmental enquiry into his illegal production in handcuffs earlier today despite judicial orders directing the jail authorities to produce him in a routine manner, without any fetters.

While the Judge had last month issued notice to DGP, Prisons to apprise as to whether any such orders were passed from their end, an action taken was report filed by the Superintendent of Prisons, Tihar Jail stating that there was no order for handcuffing of Umar Khalid during court production.

The report also stated that Khalid was handed over to Delhi Armed Police (DAP) for production in the matter (FIR 59/2020) and while handing over, no handcuffs were not put on by the Jail Staff.

Another report was filed by DCP of 3rd battalion of DAP in terms of the previous order stating that Khalid's production in handcuffs was a bonafide mistake arising out of the non communication of the order dated January 17, 2022 passed by CMM of Patiala House Court.

On asking of the Court, it was stated that there was an earlier an order for producing Umar Khalid in handcuffs. Reference was made to an order dated April 7, 2021 stating that the same required Umar Khalid to be produced in handcuffs.

While the warrant register of Umar Khalid was also filed alongwith the reply, the Court was also apprised that was the said entry regarding Umar Khalid to be produced in handcuff was by the Jail Authority and not by the Lockup Incharge.

Considering the submissions and replies filed, the Judge directed the Jail Superintendent to appear in person on the next date of hearing.

The matter will now he heard on April 1.

It may be noted that an order was also passed by a Sessions Judge of Karkardooma Court in April last year which had turned down the plea of jail authorities to produce Umar Khalid by handcuffing in both hands on grounds of being "high risk prisoners". The Judge had observed that he was neither previous convict nor a gangster and that the application was filed "without application of mind by the high echelon of Delhi Police and prison authority."

The application moved by Umar Khalid stated that after he was produced in Court with handcuffs, his counsel took objection to the same, who was then informed that Khalid was being produced in handcuff based on an order dated April 7, 2021 CMM of Patiala House District Court.

Senior Advocate Trideep Pais appearing for Khalid had previously submitted that Umar Khalid was produced today in the court by police officials in handcuffs despite there being no order from the Court and in fact, there were two contrary orders passed by two different courts.

He had added that the same was a violation of the rights of the accused and inquiry must be conducted to find fault with the delinquent police officials.