'No Person Can Indulge in Violence and Riots In Garb Of Exercising Free Speech': Delhi Police Submits Affidavit In Jamia Violence Case 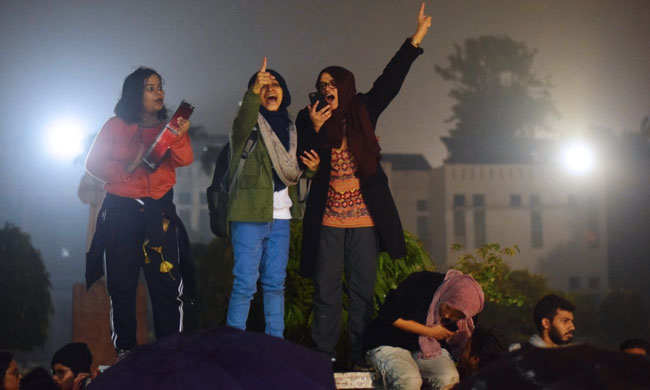 Delhi Police has informed the Delhi High Court that it had followed a standard protocol to control the unruly mob and to maintain law and order during the Jamia violence. While claiming that he police used proportionate force to stop an alleged mob of unlawful assembly, the Deputy Commissioner of Delhi Police states that is not only the right but an obligation and a duty of...

Delhi Police has informed the Delhi High Court that it had followed a standard protocol to control the unruly mob and to maintain law and order during the Jamia violence.

While claiming that he police used proportionate force to stop an alleged mob of unlawful assembly, the Deputy Commissioner of Delhi Police states that is not only the right but an obligation and a duty of the police to enter any such areas, when circumstances and situation legitimately demand such an action on part of the police to maintain law and order and to ensure protection of life, limb and property of innocent citizens and general public.

At the outset, the affidavit claims that the Petitioners have created a patently false and fabricated picture of police brutality. It further says that It appears from the averments made in the respective writ petitions that a concerted and well orchestrated effort has been made by the petitioners to mislead the court.

The affidavit goes on to mention:

'exercising the fundamental right of dissent is and should be respected. However, no person can be allowed to commit breach of law, indulge in violence, arson and riotous activity causing danger to life, limb and property of innocent citizens under the garb of exercise of fundamental right of free speech and assembly. I respectfully state and submit that such fundamental rights of the citizens are not absolute and are liable to reasonable restrictions under the constitution.'

It is claimed in the affidavit that a protest cannot create law and order situation to lay a 'siege' and to paralyse the day to day activities of the fellow citizens.

'it is clear that in the garb of student agitation,what happened in facts appears to be a well-planned and orchestrated attempt by some persons with local support (who were not students) to intentionally perpetrate violence in the area', the affidavit states.

While arguing that the writ jurisdiction of the court has been misused for prayers that should've been raised before criminal proceedings, the affidavit claims that by creating a facade of student agitation and victimisation by police, the alleged perpetrators of the unlawful activities cannot be conferred with any kind of absolute protection.

It is further submitted that none of the students have approached the government for medical and humanitarian assistance. However, the affidavit states, the same has been extended not just to the students but also to the alleged rioters.

While highlighting that no coercive action has been taken against any of the innocent students studying in Jamia, the affidavit submits that with a view to tackle the alleged riotous situation which was going out of hand, the police authorities had to take adequate measures like use of tear gas shelling and lathi charge. The use of the aforesaid was minimalistic considering the gravity of the situation.

The Delhi Police goes on to submit that:

'The police tried to keep in control this violent mob by using loud speaker and requested them not to take law in their hands but they did not pay any heed to the warning/lawful directions of police and kept on damaging the public property. The mob was.incessantly pelting bricks, bottles, stones, petrol bombs etc. on the police present on the spot due to which several police men sustained grievous injuries. Tear gas shells and moderate force were used to disperse and push back this unlawful assembly by various teams headed by SHOs of different police stations.'