"He Has No Respect For Constitution": Allahabad HC Holds Man Who Called District Judges 'Murderers Of Constitution' Guilty Of Contempt 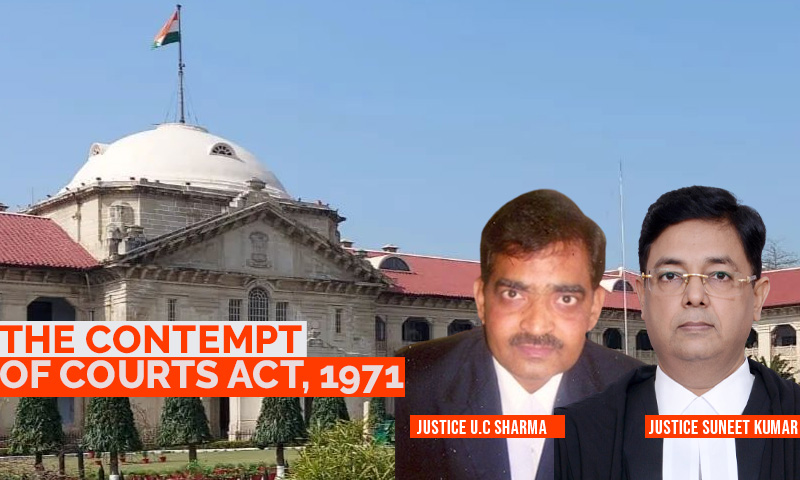 The Allahabad High Court has HELD a man, who wrote a letter alleging that in the District Court, all the Judges, Officers, and employees are dishonest and that they have murdered the Constitution of India, guilty of contemptThe Bench of Justice Suneet Kumar and Justice Umesh Chandra Sharma held Contemptnor [Vikram Sharma (Clerk)] guilty while refusing to accept his unconditional apology...

The Allahabad High Court has HELD a man, who wrote a letter alleging that in the District Court, all the Judges, Officers, and employees are dishonest and that they have murdered the Constitution of India, guilty of contempt

The Bench of Justice Suneet Kumar and Justice Umesh Chandra Sharma held Contemptnor [Vikram Sharma (Clerk)] guilty while refusing to accept his unconditional apology for writing the letter stating the aforesaid in the year 2016.

It may be noted that Sharma had written and dispatched a letter in December 2016 as a representative of 125 Crore Indians addressed to the Hon'ble Prime Minister, the Chief Justice of India, Chief Minister of Uttar Pradesh, and the Chief Justice of Allahabad High Court, alleging that in the District Court all the Judges, Officers and employees are dishonest, they have murdered the Constitution of India.

The Court stressed that an apology for criminal contempt of court must be offered at the earliest since a belated apology hardly shows the "contrition which is the essence of the purging of contempt".

"Of course, an apology must be offered, and that too clearly and at the earliest opportunity However, even if the apology is not belated but the court finds it to be without real contrition and remorse, and finds that it was merely tendered as a weapon of defence, the Court may refuse to accept it. If the apology is offered at the time when the contemnor finds that the court is going to impose punishment, it ceases to be an apology and becomes an act of a cringing coward," the Court further held.

Agaisnt this backdrop, the Court came to the conclusion that the apology tendered by the contemnor was merely a camouflage to avoid the consequence of the contempt proceedings at this belated stage.

The Court opined that it would have taken a lenient view in the matter, had the contemnor tendered a sincere apology for his conduct, at the outset, when the proceedings was put in motion, however, the Court added, the contemnor avoided the proceedings willfully and deliberately, consequently, was taken in custody on two occasions after warrants was issued.

"Having regard to the orders passed in the present proceedings we are convinced beyond reasonable doubt that the contemnor has no contrition nor remorse for his conduct. He has no respect for the authority of law and the Constitution of India, taking a lenient view in the matter would send a wrong signal. The conduct of the contemnor, a clerk of Judgeship at Bulandshahar, in dispatching the communication dated 15.12.2016 is an overt act to malign the constitutional dignitaries and to subvert the flow of justice. The allegations are wild and without basis," the Court remarked as it HELD the contemnor GUILTY of the charge.

However, noting that he has already suffered incarceration for 20 months and 20 days as of date, accordingly, the period of punishment was set off against the incarceration suffered by him in the present proceedings and thus, he was directed to be e released forthwith upon deposit of fine.

It may be noted that Sharma had, in his letter, stated the Constitution of India shall be buried on January 1, 2017, and its ashes shall be sent to the responsible murderers. He had stated thus:

"Beimano Ne Meri Awaj Ko Kuchalane Ke Liye Mujhko Aneko Pran Ghatak Hamle Karayen Hain, Jisase Apni Satya Nyay Jaan Ki Raksha Ke Liye Prarthana Patra Registered Dak Se Bheje Hain, Jisake Sare Sakshya Mere Pas Hain Aur Aapke Hain. Dinank 30.4.2014 Ko Mere Upar Smast Beiman Judges, Adhikariyon, Karmachariyon Ne Nayayalaya Ke Karyalay Me, Thane Main Chikitsalaya Mein Pranghatak Hamala Karaya... Mare Katla Hua Sambidhan Ka Mrit Sarir Mujhe Saupa Jaye, Jisase Mai Anteyesththi Vidhi Vidhan Se Kar Saku..., Atah Aap Notice Prapti Ke Ander 7 Din Karan Spast Karein Ki Jis Sambidhan Ki Hatya Apke Dwara Ki Gayi Hai, Uss Sambidhan Ki Mrit Sarir Se Mahamari Na Faile, Ki Antyeshthi Dinank 1.1.2017 Ko Ki Jaye...." [Unscrupulous people have executed many life-threatening attacks on me to suppress my voice, I have sent applications for the protection of my truth justice life by registered post, all the evidence of which is with me and with you. On 30.4.2014, all the unscrupulous judges, officers, employees made a fatal attack upon me in the office of the court, in the hospital, in Police Station ... The dead body of the slain constitution should be handed over to me, so that I can perform the funeral rituals..., Therefore, within 7 days of receipt of the notice, make it clear that the dead body of the constitution which has been murdered by you should not spread the epidemic, and that its funeral should be done on January 1, 2017.]