Non-Function Of JJ Boards Against Mandate Of A. 15(3) & UNCRC: Allahabad HC Directs State Govt. To Fill Vacancies At least 6 Months Prior To Falling Due [Read Order] 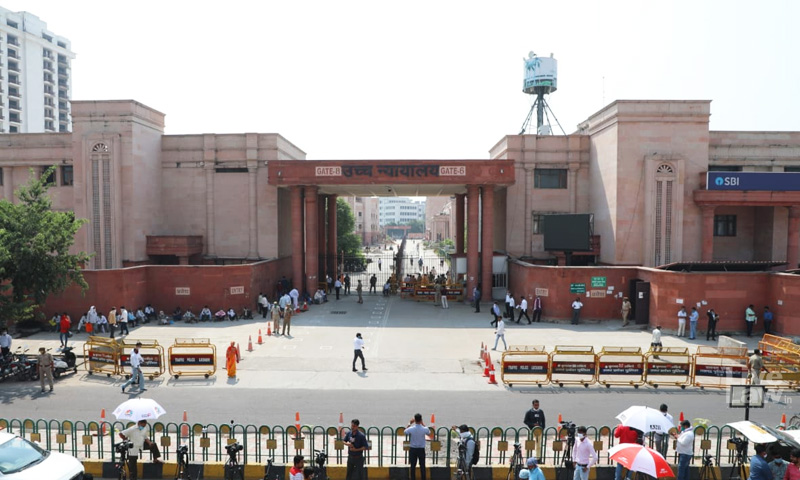 Reiterating that non-function of the Juvenile Justice Boards is clearly against the mandate of Article 15(3) and against the solemn promise made in the form of ratification of the United Nations Convention on the Rights of Children treaty, the Allahabad High Court on Monday observed that in the future, the State Government should ensure that the vacancies are expeditiously filled up...

Reiterating that non-function of the Juvenile Justice Boards is clearly against the mandate of Article 15(3) and against the solemn promise made in the form of ratification of the United Nations Convention on the Rights of Children treaty, the Allahabad High Court on Monday observed that in the future, the State Government should ensure that the vacancies are expeditiously filled up and steps for filling the vacancies be taken at least six months prior to the date of the vacancy falling due.

Justices Shashi Kant Gupta and Pankaj Bhatia were hearing a petition alleging that after the enactment of 2015 JJ Act, a notification was published on 14.12.2016 and a Committee was constituted in all the Districts. The term of the Committee so notified is fixed for a period of three years and thus the term of the Committee expired on 14.12.2019. The petitioner claimed that in terms of the model
Rules 2016, it is incumbent upon the Secretary of the Selection Committee to initiate the process of filling up a vacancy within six months prior to the incumbent demitting the Office. It was further stated that though the fresh Board ought to have been constituted prior to the expiry of the term of the Committee, however, the State Government issued a Government Order dated 31.1.2020 to the effect that till the fresh selections are made for the chairperson and members of Juvenile Justice Board as well as CWC, the District Magistrate/any ADM/SDM nominated by the District Magistrate shall perform the work of the Committee and the Chief Judicial Magistrate or any Judicial Magistrate nominated by the District Judge shall perform the work of the Juvenile Justice Board.
"This Court in Misc. Bench No. 3340 of 2008 (Anoop Gupta Vs. Union of India) took notice of the Government Order dated 31.1.2020 and observed that G.O. is not in consonance with the provisions of the Act of 2015 and the Rules framed thereunder. It was further directed that the Selection Committee
constituted shall make its recommendation to the State Government by 31.5.2020 and thereafter the State Government shall issue appointment letters within 10 days from the date of recommendations of the Selection Committee. The said order was passed on 7th February, 2020", noted the division bench.
The petitioner further informed that a PIL was filed before this Court, in which written instructions were given to the Additional Chief Standing Counsel to the effect that the constitution of the Board shall be completed by June, 2020. The said PIL was accordingly disposed of vide order dated 12th February, 2020 recording the statement given by the Additional Chief Standing Counsel for the State of Uttar Pradesh.
"Now, the present petition has been filed alleging that despite the directions of the Court and the statement given before this Court, no constitution of the Board has taken place. The petitioner claims to be eligible to be considered for appointment", recorded the bench.
On instructions, the Standing Counsel stated that in terms of Rule 87(1), the State Government has issued a Government Order dated 16.12.2018 constituting a Selection Committee under the Chairmanship of Justice Vinay Kumar Mathur (retired Judge of this Court). As regards the directions given by this Court in the order dated 7.2.2020, he advanced that in view of the lock down in the country w.e.f. March, 2020, the steps could not be taken as assured to this Court, however, the selection process has commenced and interviews are going on w.e.f. 5.10.2020 and in any event the process of selection shall be completed on or before 31.1.2021.
"The instructions are silent as to why steps were not taken for fulfilling the vacancies prior to the occurrence of the vacancies, however as the matter is seized before the Lucknow Bench, the present writ petition is disposed off with the direction that steps for constitution of the Board be taken expeditiously and further progress in this regard be informed to the Court", ordered the bench.
"The United Nations Convention on Rights of Children was ratified by India on 11th December, 1992, wherein it was agreed by the member Nations to undertake all appropriate measures including measures in respect of children, who are accused of
violating any penal laws. Children are the backbone of the country and Article 15(3) also casts a mandate upon the State to take steps for special measures to protect the rights of the children. In pursuance to the mandate of Article 15(3) of the Constitution and in furtherance of the ratification of United Nations Convention on the Rights of Children treaty by India, an Act namely the Juvenile Justice (Care and Protection of Children) Act was enacted in the year 2000 and was subsequently amended in the year 2006, 2011 and finally the Juvenile Justice (Care and Protection of Children) Act 2015 was enacted", noted the bench.
It appreciated that Section 4 of the Act provides for the constitution of Board members for every District referred to as Juvenile Justice Board.
The said Board is to consist of a Metropolitan Magistrate or a Judicial Magistrate of the First Class and two Social Workers ofwhom at least one shall be a woman. "The laudable objective of the Act can be served only when a functional Board exists in terms of the mandate of the Act for carrying out the powers conferred on the said Board", ruled the bench.