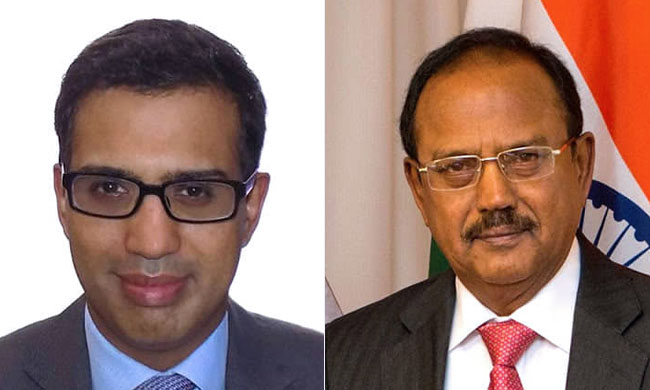 Vivek Doval, son of National Security Advisor Ajith Doval, has filed a criminal defamation complaint against Jairam Ramesh and Caravan Magazine for making publications and statements linking the growth of his company with demonetization of Rs.500 and 1000 currency notes announced in November 2016.Last week, the Caravan Magazine had published an article titled "The D Companies: Ajith Doval's...

Vivek Doval, son of National Security Advisor Ajith Doval, has filed a criminal defamation complaint against Jairam Ramesh and Caravan Magazine for making publications and statements linking the growth of his company with demonetization of Rs.500 and 1000 currency notes announced in November 2016.

Last week, the Caravan Magazine had published an article titled "The D Companies: Ajith Doval's sons run a web of companies including a Cayman Islands hedge fund even as father demands crackdown on tax havens". The complaint alleges that the "web of conjectures and surmises" in the article "hints at deep rooted conspiracies between the family members, in carrying out laundering of black money, by rerouting funds into India through Cayman Islands, in the post-demonitization era". Based on the contents of the article, Jairam Ramesh held a press conference, allegedly making defamatory statements against Doval family.

"Through calculated insinuations and innuendos raised by way of published articles and press conferences, the accused persons have raised unfounded and baseless allegations against the Complainant, and have caused irreparable damage to his reputation and goodwill that he had earned for himself over years of hard work", Doval stated in the complaint filed under Sections 499 and 500 of Indian Penal Code for prosecution of criminal defamation. Kaushal Shroff, the author of the article is made the third accused in the complaint, apart from Ramesh and Caravan Magazine.

Vivek Doval stated in the complaint that he has impeccable reputation as a professional, having received education from renowned institutions like LSE and worked in acclaimed companies like British Airways Pension Investment Management Fund, London. The idea of starting a hedge fund was formed way back in 2013 with his friend in London Amit Sharma. After several deliberations with stake holders, the fund commenced in 2016, with several reputed businessmen on board.

The demonitization announcement and the launch of the Fund "though proximate in time, are two completely independent events, none being related to other, even remotely", states the complaint.

Doval says that though the article does not point out any illegality committed by him, the narrative is presented in such a manner to suggest wrong-doings by exploiting the influence and position of his father. There is nothing unlawful in starting a company in Caymans Islands, and many reputed companies like Pepsi, Pfizer etc. are incorporated there, the complaint states.

"The Article has been used as a political tool to foster in unscrupulous hands to seek vendetta and wreak vengeance. An analysis of the Article suggests that the Accused No. 3(Shroff) has purposely and with mala fide intent,scripted the article in a manner that the average reader will perceive the facts narrated therein, only in a certain tainted colour. The title of the Article itself is scandalous to say the least. The Accused No. 2 and 3, with a mala fide intent, titled the Article as "The D-Companies" creating a prejudice in the minds of the readers against the Complainant and his family"

It further states that the the "sudden rush to the press conference on the facts derived from an Article of a magazine and the undue haste shown to do so without verifying the facts, does indicate towards the mala fide of the Accused No.1(Ramesh) abusing the platform of the Indian National Congress".

Regarding the statements in the article that the one of Directors of the fund and its legal advisor were named in Panama leaks, the complaint says "The insinuations and imputations regarding personnel related to the Fund being named in the Panama Papers or the Paradise Papers are completely ill intended and to sway the common masses in believing that the business venture is involved in some sort of illegal activity...Further, the Article does not prove or even suggest any wrongdoing on part of the said Mr.Ebanks, but mentions his name appearing in the Panama Papers and Paradise Papers, thus attributing a certain tainted colour to his personality, and by relation to the Fund."

The complaint mentions that the magazine had sent a questionnaire to Doval and his brother on January 12 by facebook messenger and email, four days before publication. The message however got vanished all of sudden from the messenger of the complainant. His brother accessed the mail only on January 17, a day after the publication. As per the complaint, there was no phone call made by the editor or author to Doval or his brother seeking clarification. The complaint dubs the questionnaire a "mere eyewash" to complete the formality as a defense of any criminal action.

He alleged that the article was published without any due diligence. He asserted that the fund has been operating in India in compliance of all laws and regulations issued by SEBI and RBI.