[Nun Rape Case] 'Its In The Interest Of All That Case Attains Finality At The Earliest', Kerala HC Dismisses Franco Mulakkal's Plea To Adjourn The Trial Due To COVID [Read Order] 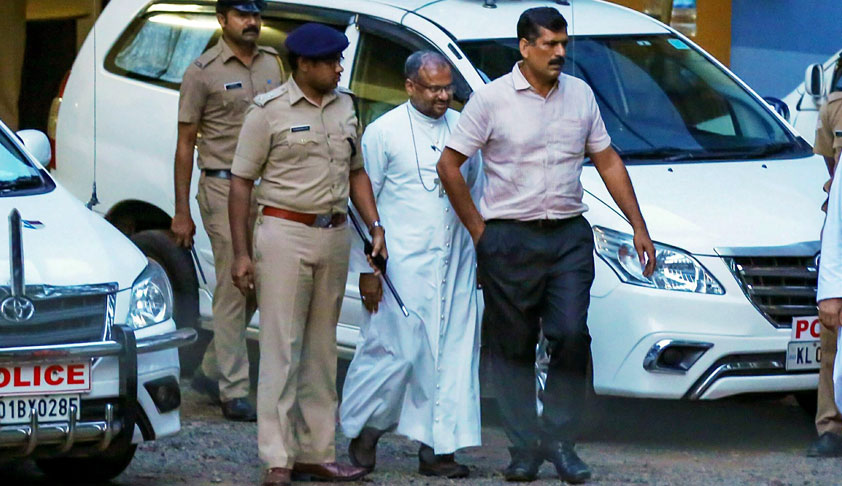 The Kerala High Court on Thursday (01st October) dismissed a petition filed by Former Bishop Franco Mulakkal seeking to adjourn the trial in the nun rape case citing a big spurt in COVID cases in Kerala.The Bench of Justice V. G. Arun, while dismissing Former Bishops' Petition, observed,"It is high time for us to accept this reality and move on with our affairs. In any case, the wheels of...

The Kerala High Court on Thursday (01st October) dismissed a petition filed by Former Bishop Franco Mulakkal seeking to adjourn the trial in the nun rape case citing a big spurt in COVID cases in Kerala.

"It is high time for us to accept this reality and move on with our affairs. In any case, the wheels of justice delivery system cannot be permitted to come to a grinding halt by reasons of the pandemic"

Background of the Case against Mulakkal

It may be noted that Mulakkal is accused of raping a nun on multiple occasions during the period 2014- 2016 by abusing his dominant position. Allegations surfaced for the first time in July 2018 when a collective called "Save Our Sisters" launched public protests calling for the arrest of Franco. Later, the Special Investigation Team of Kerala police submitted the charge-sheet against him for offences punishable under Sections 342, 376 (2) (k) and (n), 376C(a), 377, and 506 (I) IPC.

The reason for making such prayer was the inability of the Senior Counsel appearing for the petitioner to be at Kottayam for conducting the cross-examination.

It was stated in the petition that the Senior Counsel is nearing 73 years and is suffering from various age-related ailments and because of the pandemic, is confined to his residence at Ernakulam.

This petition was disposed of by the trial court by adjourning the cross-examination by two weeks and he posted the case to 5.10.2020, with the rider that no further request for adjournment will be entertained.

Argument put forth by Mulakkal's Counsel

It was contended by Mulakkal's Counsel that the Sessions Case being of the year 2019, "the Court is showing undue haste by insisting to proceed with the trial".

In any case, it was further contended, "at least a breathing time should have been granted for making arrangements for the accommodation and other facilities of the Senior Counsel."

Lastly, it was argued that the folly committed by the trial court should be corrected by deferring the trial, at least, till the end of this month.

It was pointed out that the de facto complainant is being provided round the clock protection due to threat from various quarters, which is yet another reason to complete her cross-examination without delay.

"As rightly observed by the learned Sessions Judge, the requirement under Section 309(1) Cr.P.C is of continuing the trial on a day-to-day basis until all the witnesses in attendance have been examined, unless the court, for reasons to be recorded, finds the adjournment beyond the following day to be necessary", noted the Single Bench.

It may be noted that the Proviso to Section 309(1) mandates the completion of the trial relating to offences under Section 376 within a period of two months from the date of filing of the charge sheet.

"Though the mandate of the proviso does not completely denude the trial court's power to grant adjournment, it is clearly indicative of the restricted manner in which the power should be exercised."

The Court acknowledged the fact that in spite of chief-examination of CW1 being completed on 17.9.2020, the learned Sessions Judge adjourned the trial by two weeks.
Therefore, the Court noted, the submission that the petitioner was not granted even breathing time for making arrangements is without substance. The Court did not find any reason to interfere with the decision of the trial court.
"In the Court's considered opinion, it would be in the interest of all concerned to see that the case attains finality at the earliest", the court opined.

It may be noted that following this order of the High Court (rejecting the plea of Mulakkal) the trial, in this case, will continue in the Chief Judicial Magistrate's court in Kottayam. The next hearing in the matter will begin on October 5.

Notably, a trial court in Kerala has restrained the print and electronic media from publishing any matter relating to the in-camera proceedings in the trial of the nun-rape case, in which Franco Mulakkal, a bishop of Roman Catholic Church, is the prime accused.

Earlier, in the month of August, the Supreme Court had dismissed the plea of Bishop Franco Mulakkal seeking discharge from the criminal trial in the nun-rape case.

A bench of Chief Justice SA Bobde, Justices AS Bopanna & V. Ramasubramaniun, said that there was no case for discharge.

Notably, Bishop Franco Mullakkal had approached the Supreme Court challenging the judgment of Kerala High Court rejecting his plea seeking to discharge him from the rape case.

In July 2020, in its judgment dismissing Bishop Franco Mullakkal petition, the High Court had observed that there are prima facie materials available to show that the Sister was subjected to sexual assault including rape by him.

"It is not possible to infer that this Bishop/petitioner was falsely implicated by the Mother Superior of the Home functioning under him, on mere enmity as contended by him. The prosecution has produced the chronicle/ record maintained in the Home indicating his stay in the Home on the relevant dates during his visits.", Justice Shircy V. had observed in her judgment dismissing the Revision Petition which was filed by the Bishop challenging the order of the trial court rejecting his plea to discharge him from a rape case.