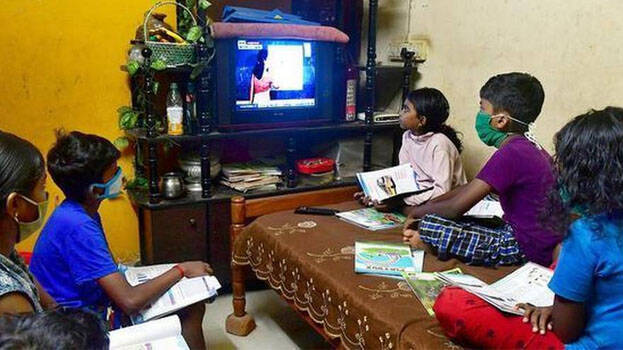 The State Government informed the Karnataka High Court that an estimated 20 percent of students studying in Government and government aided schools in the state have no access to any gadgets or television or any virtual mode for taking instructions from teachers. A division bench of Justice B V Nagarathna and Justice Hanchate Sanjeev Kumar expressed concern over this submission and...

The State Government informed the Karnataka High Court that an estimated 20 percent of students studying in Government and government aided schools in the state have no access to any gadgets or television or any virtual mode for taking instructions from teachers.

A division bench of Justice B V Nagarathna and Justice Hanchate Sanjeev Kumar expressed concern over this submission and said :

"This percentage of students who are not attending classes virtually is of great concern. In fact if these students happen to be girls students and not attending classes virtually, in absence of schools remaining shut, there is possibility of such girls students being married off particularly in rural areas. Their safety is also concerned in as much as the threat of trafficking of children including minor boys is significantly high."

"In absence of said percentage of children having any kind of link to teaching being imparted virtually during this ongoing pandemic on account of non-availability of technology, there is threat of children being engaged in child labour or begging or rather such activities which is totally against interest of such children."

The court then expressed that children are vulnerable on account of not being able to access the classroom virtually due to non-availability of technology. It said "How such children would spend time while all others who have access to technology will be attending virtual classes is a matter of concern of this court."

To this, the government counsel replied that it was decided that mentoring of such children would be done and steps would be taken to make available technology to such children, if they make an application to Block Development Officer or the Tahsildar, to provide technological support as per the timetable.

In response the court said :

"We can only visualize their plight but cannot just be rest assured by a sympathy being extended to them. In fact it is plight of the vulnerable children which concerns the court, in the absence of available of technology and not being instructed by teachers they become more vulnerable to the threats referred to above and be marginalized and they prove to be a source of great concerns, not only for parents and guardian but also for society and the state."

The court also reminded the state government that :

"If object of Article 21A is to be emphasized education is to be imparted to children upto age of 14 years as it is their Fundamental Right and the obligation is on the state to provide accessing of education by means of technology in absence of schools being opened due to pandemic. If such steps are not taken for these children by state, they would be a failure on part of the state in ensuring Fundamental Rights of such children under article 21-A of the Constitution and also the right of the child to be educated."

Senior Advocate Harish Narasappa appearing for petitioner A A Sanjeev Narrain submitted that though the State government data shows that around 20 percent students do not have access, it is not the reality.

Following which the court noted "Even according to the state government 20 percent do not have access to technology and therefore not benefiting on classroom instructions that would commence from July1. State would have to consider steps to be taken for ensuring that this 20 percent of students are remained within the education system and a link is established to the classroom, so that they are not deprived of the classroom instruction that is to commence from July 1, virtually for the present academic year."

The court also directed that data shall be collected by the Commissioner of Public Instruction in regard to availability of technology to school students in the following manner.

Between June 15 to June 30, class teachers of every government school and aided schools can collect information from respective students/parents about availability of smartphones/computers/laptops. The said data be furnished by teachers to the headmaster, who shall in turn convey the said data to the Block Education Officer. The BEO shall compile the data and submit it to the Deputy Director of Public Instructions of each district. He would submit the same to the Commissioner who would compile the data collected from districts, taluks and submit before this court the actual figures of students who have no access to technology or who have poor access to technology, so far as govt and aided schools in the state are concerned.

The court opined "If the said data is made available it will be useful for making available access to technology and imparting education during the current pandemic." The said exercise has to be completed on or before July 1, and a status report is to be placed before the court on July 8.

The court even noted that "Lack of education or discontinuation in education is a serious concern, not only of the parents/guardians, state and the society but for the child itself. A child may feel left out or left behind in the absence of technology being not made available to him/her during these days of pandemic while other children having access to technology would be benefiting from the instruction being imparted by teachers virtually. Such discrimination among children cannot be accepted and hence state must take concrete steps and endeavor to ensure all children have access to technology so that they are not out of education system, which may ultimately result in discontinuation of education and increase out of school children and have other serious consequences on them."

Further it said "We hope and trust that the state would seriously take up the exercise of collecting data from the level of classroom, through class teachers with regard to students not having access to technology and who are thereby deprived of the Right to education."

The court even orally suggested to the state "India is quite unique we cannot replicate what is happening abroad, but you must get ideas on how schools were functioning or not functioning in other countries and how they were coping with lost days of students. Those children may not face the problems that our children would face due to being out of education, child trafficking, child marriages. But still you can consider looking at this aspect."

During the hearing the state government informed the court by filing a memo that the academic year would commence on July 1. However, from June 15 to June 30, teachers will come to schools and take steps for preparation of time tables and complete admission process and also prepare the institutional plan, program of work and work allotment etc, for the ensuing year 2021-22. Further it was informed that if scheduled physically run schools become elusive. Then within the purview of the State's guidelines all the programs will be reorganized. In case of this situation, an alternate technology oriented educational activities schedule is prepared to facilitate schools to maintain uniformity in the standard of teaching, learning and evaluation process throughout the state.

The State government informed the court that owing to Covid-19 and ongoing lockdown printing of textbooks for school students is delayed and therefore once the lockdown is lifted the printing will be completed and distribution shall be made in the months of August-September. Moreover, efforts shall be made to retrieve the textbooks used in textbook banks setup in all schools across the state so that the same could be distributed to incoming students of that particular standard.

To which the court said "State government shall issue necessary instruction to the Block Education Officer and in turn to teachers of government and aided institutions to request students and parents to return textbooks used in previous academic year to schools so that the same could be made available to the next batch of students."

It added "We find that exercise if completed is a salutary one and would ensure early access to textbooks for students. In the meanwhile, steps shall be taken to ensure that textbooks and notebooks are printed in a timely manner so that they are available for distribution."