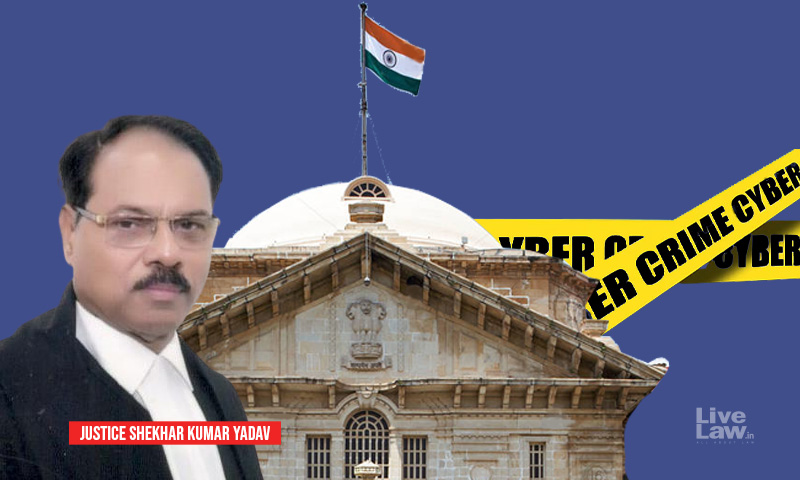 Expressing concern over the spreading nationwide network of cyber thugs, the Allahabad High Court on Tuesday observed that cyber thugs are eating up the entire country like termites and are responsible for the weakening of the economic condition in the country. The Bench of Justice Shekhar Kumar Yadav further observed that it was necessary to fix the accountability in such matters so...

Expressing concern over the spreading nationwide network of cyber thugs, the Allahabad High Court on Tuesday observed that cyber thugs are eating up the entire country like termites and are responsible for the weakening of the economic condition in the country.

The Bench of Justice Shekhar Kumar Yadav further observed that it was necessary to fix the accountability in such matters so that the money of the people, who have been victims of cyber fraud, is not lost.

Consequently, the court has issued a notice to the Central Government, State Government and the Reserve Bank seeking their affidavits on this issue explaining as to how the money of the customers could be kept safe and in case of such crimes, the bank and the police will be held responsible.

The matter has been posted for further hearing on September 14.

The Court was hearing a matter wherein money was fraudulently withdrawn from the bank account of a Judge (retired), High Court.

In June 2021, during the course of hearing, the Allahabad High Court had observed that the police authorities are not making serious efforts in controlling these types of fraudulent activities.

The Bench of Justice Shekhar Kumar Yadav had also expressed its displeasure "with the efforts being made by the police authorities with regard to fraudulent withdrawal of money prevailing around the district as well as the state level".

Earlier, the Court had asked for the following details from the DGP office, Lucknow, SP Crime and Inspector Cyber ​​Crime (Prayagraj):

How many cases of cyber frauds above one lakh and below one lakh are registered in the state and Prayagraj and what is its progress report.

Perusing the report filed by the officials pursuant to the directions of the Court, the Court was not satisfied with the same and therefore, the court opined that both the bank and the police are not serious on the issue of rising cybercrime in the Country.

At the outset, the Court expressed its surprise over the fact that the victims of cyber fraud are often told by the police and bank officials that the cyber thugs run this network from far-flung/Naxalite areas of the country, and that the police are afraid to go there.

Further, emphasizing that the money of the poor is not safe even in the banks, the Court sought to know on whom should the responsibility to repay the money lie, if the money is fraudulently withdrawn from the bank through cyber fraud and if it is not returned.

"The responsibility should lie on someone, as this disease is making our country hollow and the poor is getting poorer and poorer. It will not help to just say that this is a case of cyber fraud and that the Criminals do not get caught and the customers themselves should be smart. The majority of the country's population is less educated and less intelligent, whereas cyber fraudsters are educated and very clever, in whose guise, innocent educated citizens are trapped."

"One wonders when even the judge is not safe from these cyber thugs, criminals, then what to say about the common citizens. The government too should think about how to stop such crimes strictly and how the accountability of the bank and the police could be fixed," added the Court.

In this regard, the Court also referred to the pledge of the Prime Minister of India that every citizen should have a bank account in his/her name so that the middlemen cannot get the money of the poor.

Importantly, the Court clarified that it is not concerned with those rich people who are involved in white-collar crimes and who do not keep their black money in the banks and therefore, weaken the economic condition of the country by keeping it with themselves.

"The court is talking only about those honest citizens who keep their money in the banks and strengthen the economic condition of the government and the country and take it on the path of development," added the Court.

Looking at the seriousness of such incidents, the Court called the Solicitor General for India, Mr. S.P. Singh, the Advocate of the Reserve Bank, Mr. Vikas Budhwar and the Additional Advocate General Mr. Mahesh Chandra Chaturvedi on behalf of the state to the Court.

The Court requested the SG to obtain relevant advice from the Government of India, the State Government and the Reserve Bank of India and file an affidavit providing guidance and also explaining as to how the money of the customers can be kept safe.