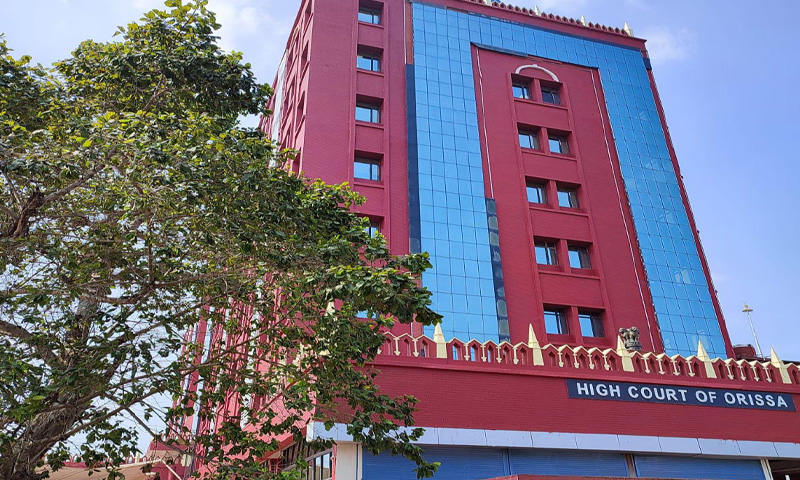 The Orissa High Court has dismissed the writ petition filed by Mr. Amitav Tripathy, who had challenged marks assigned to him in the examination conducted for direct recruitment from the Bar in the cadre of District Judge. A Division Bench of Chief Justice Dr. S. Muralidhar and Justice Radha Krishna Pattanaik, in its order passed on 11th May 2022, had observed the case to be "rare...

The Orissa High Court has dismissed the writ petition filed by Mr. Amitav Tripathy, who had challenged marks assigned to him in the examination conducted for direct recruitment from the Bar in the cadre of District Judge.

A Division Bench of Chief Justice Dr. S. Muralidhar and Justice Radha Krishna Pattanaik, in its order passed on 11th May 2022, had observed the case to be "rare and exceptional" and had ordered the Registrar (Examinations) to send two questions for revaluation by a 'Law Expert'.

The revaluated answer-sheet was produced before the Court on Wednesday. After such revaluation, the petitioner got only additional 0.5 mark, which was 1 mark less than the qualifying marks for the interview. Thus, the Court dismissed the petition and observed,

"The net result is that the candidate gets just 0.5 mark additional for the answer to Question No.1 in Group-D. In all, therefore, the Petitioner secures 45.5 + 0.5 i.e. 46 marks. Since he does not secure 47% in paper II, there is no scope for calling him for interview."

The petitioner appeared in the examination conducted by the High Court of Orissa for direct recruitment in the cadre of District Judge from the Bar for the year 2016-17. When the results for the written examination was declared, the petitioner did not find his name in the list. Being dissatisfied with the result, he applied for xerox copies of his answer-sheets under the RTI Act.

On verification of his answer-sheets, he found that he secured 53 out 100 marks in Paper-I and 43.5 out of 100 marks in Paper-II. Upon calculation of marks given in Paper-II, he found that he actually secured 45.5 marks, but his marks were mistakenly totalled as 43.5. It is to be noted that the examination rules required candidates to secure at least 45% in each paper and minimum 50% in aggregate to qualify for the interview. Therefore, the petitioner was not selected for the interview.

On further perusal, he discovered that he was awarded only 0.5 mark out of 5 marks each in answers for question numbers 1 and 3 of the Group-D of Paper-II. He alleged that the same was in gross violation of the 'scheme of valuation' as he provided pin-pointed answers for which he deserved more than what was given. Hence, he challenged the same before the High Court.

On 4th May 2022, an affidavit was filed by the Examination Committee, which stated that after verification of the marks awarded by the examiner in the said answer script with the mark sheet attached, it was found that there is an error in totalling of the marks. The total marks come to 45.5 instead of 43.5 marks in paper-II of the petitioner.

As regards evaluation of marks on question Nos. 1 and 3 of Group-D was concerned, the Committee on going through the answers on the face of the prohibition contained in the rules found no such impropriety or irregularity in awarding of marks. Further, since the petitioner did not secure 47% of marks in Paper-II (so as to secure 50% in aggregate), the Committee opined that there arose no scope of his being called for the interview.

Order of the Court on Previous Date:

The Court, on the previous date, held that in exercise of the powers under Article 226 of the Constitution, in a rare and exceptional case, the power of the Court is not negated from ordering re-valuation. Further, it found that there were no such rules against revaluation.

The Court went through the answers to the questions 1 and 3 of Group-D, where the petitioner was awarded 0.5 mark each. The maximum marks assigned to the concerned questions were 5 each. The reason given in the counter affidavit for the said marks is that "on their very face appears to be cryptic and not elaborative enough keeping in view the marks assigned to the concerned question".

Having carefully considered the matter, the Court held that the two questions must be asked to be revalued by a Law Expert and directed the Registrar (Examinations) to send the original answer script of the petitioner to any Law Expert, as may be chosen by the Examination Committee in a sealed cover and asked that only the answers to questions 1 and 3 of Group-D be asked to be revalued.

It is to be noted, this was the last chance for Mr. Tripathy to appear in the said examination, as he could have appeared only till attaining the age 45.