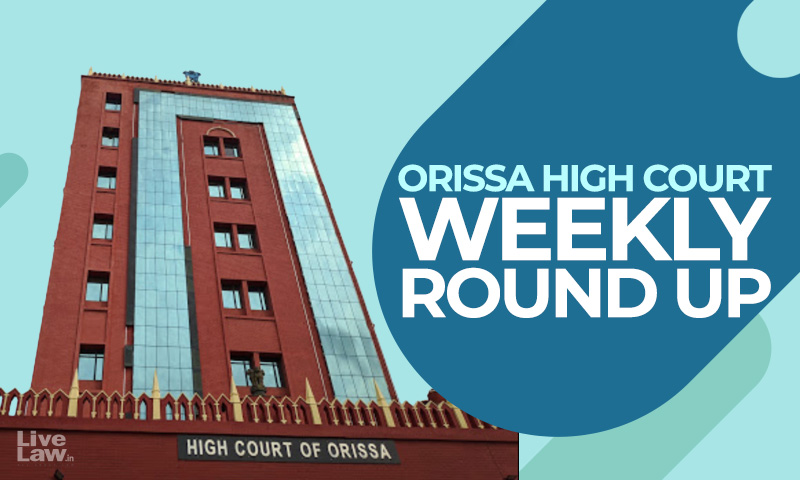 Cases Reported in the Week:

The Orissa High Court upheld the life imprisonment of a man convicted for murder of an eight (8) years old boy, basing upon the dying declaration of the deceased. A Division Bench of Chief Justice Dr. S. Muralidhar and Justice Chittaranjan Dash placed reliance on State of Uttar Pradesh v. Veerpal, wherein the Apex Court observed,

"Now, on the aspect, whether in the absence of any corroborative evidence, there can be a conviction relying upon the dying declaration only is concerned, the decision of this Court in the case of Munnu Raja & Anr. (supra) and the subsequent decision in the case of Paniben (Smt) V. State of Gujarat, (1992) 2 SCC 474 are required to be referred to. In the aforesaid decisions, it is specifically observed and held that there is neither a rule of law nor of prudence to the effect that a dying declaration cannot be acted upon without a corroboration. It is observed and held that if the Court is satisfied that the dying declaration is true and voluntary it can base its conviction on it, without corroboration."

Judicial Magistrate Can Take Cognizance Even Against Persons 'Not Charge-Sheeted' For Offences Exclusively Triable By Court Of Sessions: Orissa HC

The High Court clarified that a Judicial Magistrate has the power to take cognizance of an offence essentially and exclusively triable by the Court of Sessions vis-à-vis an accused person who is not 'charge-sheeted'. A Division Bench of Chief Justice Dr. S. Muralidhar and Justice Chittaranjan Dash cited the Constitution Bench decision of the Apex Court in Dharam Pal v. State of Haryana, wherein it was observed,

The Court held that a Collector can transfer Gram Rozgar Sevakas ('GRS'), who are engaged under Section 18 of the Mahatma Gandhi National Rural Employment Guarantee Act, 2005 ('MGNREG Act') read with the MGNREG's Operational Guidelines, 2013, for 'administrative exigencies'. While dismissing challenges to such transfers, a Division Bench of Chief Justice Dr. S. Muralidhar and Justice Chittaranjan Dash held,

"In view of the above statutory framework and set up Operational Guidelines and instructions, the Court is satisfied that the Collector was authorised to issue orders of transfer of GRSs and it was not in violation of any of the provisions of the OGP Act (Orissa Gram Panchayat Act). There is a basic misconception in construing the engagement of the GRSs as being covered by the OGP Act whereas it is covered under Section 18 of the MGNREG Act read with the Operational Guidelines issued thereunder."

Writ Not Maintainable Against Admission Of Petition Under Section 34 Of A&C Act Without Pre-Deposit: Orissa High Court

The High Court ruled that the Court cannot entertain a writ petition against an order passed by the lower court admitting the application under Section 34 of the Arbitration and Conciliation Act, 1996 (A&C Act) to set aside the arbitral award, despite the fact that the award debtor had failed to deposit 75% of the awarded amount, as mandated by Section 19 of the Micro, Small and Medium Enterprises Development Act, 2006 (MSMED Act). The Single Bench of Justice Arindam Sinha held that rejection of the demurrer application, filed by the petitioner for violation of the provisions of Section 19 of the MSMED Act, can be taken as a ground of appeal under Section 37 of the A&C Act against the order passed in a Section 34 application. Hence, the Court ruled that it cannot be considered by the Court as a rarest of the rare case so as to exercise judicial review.

CJI Uday Umesh Lalit, Justices Dhananjaya Y. Chandrachud and M.R. Shah, Judges, Supreme Court of India inaugurated 34 Paperless Courts across 'all the 30 districts' of Odisha on 17th September, 2022. Further, to mark the 75th Anniversary of the High Court, a special 'postal cover' and 'cancellation cachet' along with 6 'picture post cards' featuring the High Court of Orissa were released. While speaking at the event hosted at the Odisha Judicial Academy, Cuttack, the CJI congratulated the Judicial Officers across all the districts of the State of Odisha for voluntarily choosing to adopt paperless Courts. He said,

"All of you deserve congratulations, above all, the High Court of Orissa for showing us a new direction, new light. I wish this gets replicated, repeated everywhere."