Oxygen Requirement Of Karnataka Around 1700 MT Per Day But Centre Increased It Only To 862 MT : Karnataka High Court 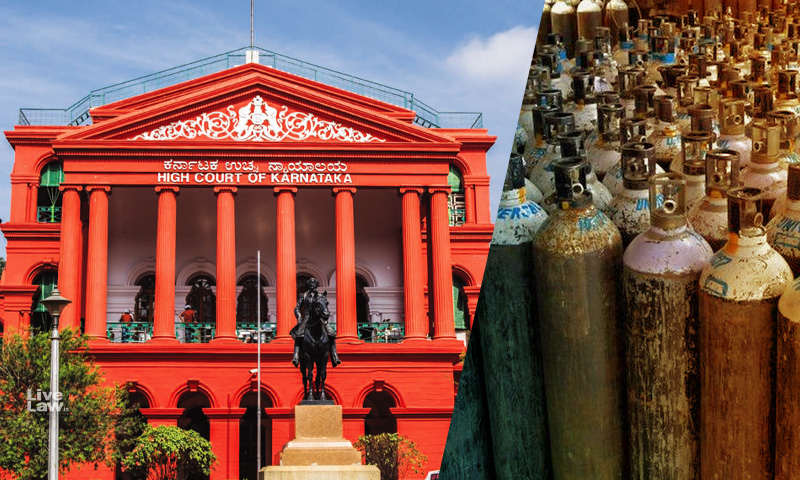 x
'Are you not aware people in state have died due to non-availability of oxygen?', bench asked the Centre's counsel.

In wake of the incident of Chamarajanagar where 24 people admitted to a covid-hospital died allegedly due to shortage of supply of oxygen, the Karnataka High Court on Tuesday said it will issue directions to the Central Government to immediately increase the quota of Liquid Medical Oxygen being supplied to the state. A division bench of Chief Justice Abhay Oka and Justice...

In wake of the incident of Chamarajanagar where 24 people admitted to a covid-hospital died allegedly due to shortage of supply of oxygen, the Karnataka High Court on Tuesday said it will issue directions to the Central Government to immediately increase the quota of Liquid Medical Oxygen being supplied to the state.

"We are putting the Central Government to notice that we will have to consider the prayer for the issuance of direction to the Central Government to immediately increase the quota for Oxygen to the state government. Especially when it is pointed out across the bar than in ten hospitals in the city of Bengaluru, the stock of oxygen has almost come to an end. Even in Kollar district hospital, it does not have a supply of oxygen."

During the hearing, the counsel for the Central Government informed the court that as per the earlier direction of the court, the central government has revised the Oxygen supply quota to the State of Karnataka from 802 MT per day to 865 MT per day.

Advocate General Prabhuling K Navadgi submitted before the court a letter written by the Additional Chief Secretary of the State government to the Government of India, mentioning that requirement of oxygen in the state is likely to go up to 1792 MT per day by May 5. Further, it was stated that 70 percent of active cases will require oxygenated beds and 3 percent will require ICU beds with a ventilator. It was stated that the minimum requirement will be 1162 MT per day, as on May 5.

The bench orally asked the Centre's counsel : "What is your (Central Government) explanation, the requirement of the state is around 1700 MT per day and you have increased it only to 865? Are you not aware that people have died in the state due to non-availability of Oxygen."

It added "The Central government will have to either say that the state government is making out a false requirement of oxygen...if that is not false then you must increase the quota, one of the two things you will have to do it by tomorrow."

Further, it observed "Keep aside the process, forget about the process, tell us now when will you increase the quota. We don't want any explanation the supply has to be provided. If your process is faulty is it not for you to correct?We don't want your process, we want you to supply Oxygen. You want people to die?

In its order the bench noted that "Members of the bar who are present today, based on figures of active cases in other states have stated that allocation of quota of Oxygen is discriminatory. In the sense that some states which do not have so many cases have been allotted the quota which exceeds the quota allotted to the State of Karnataka."

Accordingly, it directed the members of the bar to place on record data of all positive cases reported in all states, total active cases and quota of oxygen allotted to each state.

The High Court said "Supreme Court order presupposes that you must give full quota which is required. In addition to that full quota you must create a buffer. Forget about the buffer you are not creating even regular supply."

Taking note of reports about death of 24 patients in a COVID facility in Chamarajnagar due to shortage of oxygen, the court directed the State Government to place on record existing guidelines/SOP for allocation of Oxygen to various cities/districts/hospitals. The State Government will also clarify whether any mechanism is available under which a hospital which has run out of stock of oxygen can immediately apply for the release of supply of Oxygen. State will have to clarify the mechanism applicable to those districts like Chamarajanagar where there are no bottling plants and filed oxygen cylinders are required to be brought from adjacent districts.

The state government is also directed to take a call on whether in such districts where oxygen cylinders are required to be physically called from adjacent districts. The buffer quota and reserved quota can be maintained at district headquarters which can be used in case of emergencies.

Judicial Inquiry in the incident:

The court said "Prima facie we are of the view that considering the seriousness of the incident this is a fit case where inquiry will have to be held by appointing a retired judge of this court. Especially because the incident is not confined to Chamarajanagar district, there are reports that similar incidents are happening in other districts as well." We propose to hear the Advocate General on this issue.

The Central Government informed the court that as per directions issued by the court for the period of April 21 to May 9, allocation to the state of Karnataka of remdesivir is now increased to 3,01,000 vials.

However, the state government informed the court that as on April 30, the requirement was of 35,000 vials per day. Considering the aforesaid quota what the state is getting is 15,800 vials per day, which is less than 1 half of the requirement, stated in a letter of April 30 written by the State government to the Government of India. The bench said "This indicates that the state is not getting Remdesivir to the extent of even 50 percent of its requirement. We propose to issue necessary directions against the Central government tomorrow."

The Court appointed Advocate Vikram Huilgol as amicus curiae to assist the court in the matter.

The matter will be next heard on May 5.