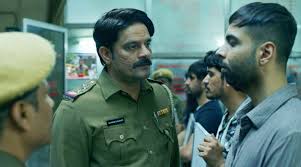 A complaint has been filed before Punjab police against OTT platform Amazon Prime Video and the Producers of the web series 'Paatal Lok' for allegedly hurting religious feelings and sentiments of the Sikh community. G.S. Dhillion, an advocate practicing in the Punjab & Haryana High Court has written to the Police Station at S.A.S Nagar District in Punjab alleging that episode 3 of...

A complaint has been filed before Punjab police against OTT platform Amazon Prime Video and the Producers of the web series 'Paatal Lok' for allegedly hurting religious feelings and sentiments of the Sikh community.

G.S. Dhillion, an advocate practicing in the Punjab & Haryana High Court has written to the Police Station at S.A.S Nagar District in Punjab alleging that episode 3 of the popular series, titled 'A History of Violence', was made with the intention to create communal disharmony.

It is further alleged that the makers purposely and maliciously highlighted caste based clashes in the specified episode, showing two castes in bad light. The episode, set in a village in Punjab, also uses a caste portraying slur, which creates an atmosphere of enmity between two castes in the State, he alleges.

"Episode No.3 of the above named internet series is sub-named as 'A History Of Violence' is shown to be set in a village of Punjab. The accused have purposely and maliciously, with an intent of creating communal disharmony and caste based clashes have shown two castes in bad light besides seriously defaming members of the Sikh community and hurting the religious feelings of Sikhs at large. The accused have used a caste based slur namely ' MANJAAR' again and again for a particular caste and shown hate between the other caste namely 'Jatt Sikh'."

Specifying timings of the episode, wherein members of the Sikh community are apparently referring to a boy as 'Manjaar', the complainant states that such portrayal is both criminal and defamatory. Further narrating sequences from the episode, Dhillon accuses the makers of portraying Sikhs as oppressors of the society, particularly women.

Dhillon throws light on the particular scenes he took issue with as follows:-

"That in the said third episode starting from 6:00 minutes upto 18:00 minutes the accused have shown the members of Sikh community repeatedly referring to a boy as 'MANJAAR' which is derogatory and criminal. Further encouraging violence, the boy from the said community is shown have brutally murdered three boys from the other community with a knife. The accused have glorified caste and religion based hatred and violence.

To claim that this portrayal is far from the truth, Dhillon goes on to highlight that the Sikh community is known to be protectors of feeble and incapable people. Invoking the history of the Sikh community, as one which has always helped those in need, it is alleged that the portrayal in the show has caused immense unrest within the community.

"It is pertinent to mention here that the Sikh community has a history of protecting the feeble and incapable people, especially women from the times of Ahmed Shah Abdali and Nadir Shah. This portrayal of Sikhs as predators has caused immense unrest in the sikh community and badly hurt the religious feelings of the Sikhs. The accused have also acted in a malicious manner to promote enmity between two peacefully co-existing castes of Punjab belonging to the same Sikh religion by calling members of one caste 'MANJAAR' and creating hatred for the other community. This could lead to caste based clashes and unrest in Punjab and weaken the brotherhood and communal harmony in the state."

In this light, the complainant seeks the registration of an FIR and strict action under relevant provisions of the Indian Penal Code, Scheduled Caste and Scheduled Tribe (Prevention Of Atrocities) Act, 1989 and Information And Technology Act against the production company, Clean Slate Films Pvt. Ltd, along with its directors, including well-known hindi film actor Ms. Anushka Sharma.