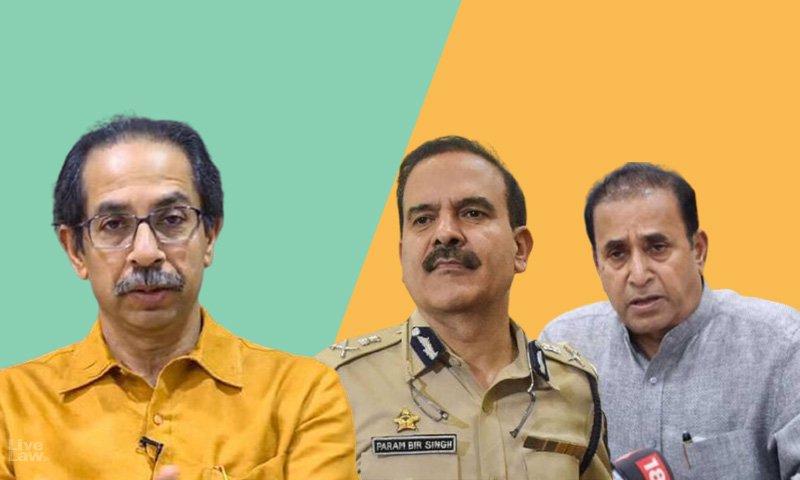 Param Bir Singh, former Mumbai Police Commissioner, has told the Enforcement Directorate that he had received instructions not only from then Home Minister Anil Deshmukh but also from Chief Minister Uddhav Thackeray and his son and a Cabinet Minister Aditya Thackeray on the point of reinstating tainted cop Sachin Waze back to the Mumbai Police. Singh's statement is part of the...

Param Bir Singh, former Mumbai Police Commissioner, has told the Enforcement Directorate that he had received instructions not only from then Home Minister Anil Deshmukh but also from Chief Minister Uddhav Thackeray and his son and a Cabinet Minister Aditya Thackeray on the point of reinstating tainted cop Sachin Waze back to the Mumbai Police.

Singh's statement is part of the chargesheet filed by the Enforcement Directorate investigating a money laundering case against Deshmukh.

Waze was reinstated in June 2020 after being under suspension for over 16 years for his alleged involvement in the custodial death of a bomb blast accused. He is currently in judicial custody as he is the prime accused in the Antilia Bomb Scare Case, which he was initially investigating.

He was dismissed from the force in May, last year, following his arrest.

Singh was the head of the Review Committee, which reinstated Waze in June 2020 after his suspension. After Waze was reinstated, Singh says there was pressure for his posting as well as cases to be handled by him from the Home Minister as well as the Chief Minister.

"Some important cases were assigned to CIU which was headed by Shri Sachin Waze on instructions of Hon'ble CM & Hon'ble Home Minister. He was being directly called by both for briefing and giving instructions for further action. I would further like to add that Shri Sachin Waze had also told me that for his reinstatement and posting Shri Anil Deshmukh had made a demand of Rs. 2 crore," Singh's statement reads.

On being asked who did Waze used to brief, Singh has yet again named the Chief Minister as one such authority. "In this regard I state that Shri Sachin Waze used to brief his senior officers who in turn used to brief me. However, in some important briefings Shri Sachin Waze used to accompany his superior officers while briefing me. Some times he would also directly come and brief me. I would like to add here that he was being directly called by Hon'ble CM & Hon'ble Home Minister for briefing & receiving instructions for further course of action. This fact came to my knowledge through my own sources and on few occasions Shri Sachin Waze also disclosed to me," Singh has told ED.

According to Singh's statement, the Police Establishment Board meetings on transfers and postings were a mere formality, and a list for the same would be decided in Anil Deshmukh's office. He has handed over five such lists to the ED, in which Deshmukh has, in his handwriting, mentioned on whose recommendations a particular officer was being posted at a specific place.

1. List-1 is a list handed over to me by Shri Anil Deshmukh personally and it relates to transfers of ACPs within Mumbai City and in this list Shri Anil Deshmukh in his own hand writing in Pink pen has mentioned on whose recommendation he was directing for posting of these officers.

2. List-2 which has 03 pages was also handed over to me by Shri Anil Deshmukh and contains name of those police officers who were to be posted out of Mumbai city in the state level PEB and there is a hand writing of some person from his office on the right-hand corner on first page mentioning "submitted on 26.10.20.

3. List-3 which has 05 pages was also handed over to me by Shri Anil Deshmukh and on the first page in green pen is the hand writing of Shri Anil Deshmukh. List 3 contains the name of 54 police officers for internal posting within Mumbai city. During the discussion, I had made my notings in pencil and pen on the said list.

4. List-4 Which has 02 pages was also handed over to me by Shri Anil Deshmukh and contains names of 24 officers for internal postings in Mumbai city. In list-4, or the first page at right hand corner in Marathi language "Navin" is written by someone from his office. Other notings in pencil and pen in the list-4 are my notings during discussion.

Singh's also terms the cancelling of transfer orders of 10 Deputy Commissioners of Police in Mumbai by the Chief Minister as "blatantly illegal act and in total violation of the guidelines of Hon'ble Supreme Court (in Prakash Singh's case)."

Singh says he had issued orders in July 2020 for transfers of DCPs within the city, which was done "following the due process of meeting of PEB for Mumbai City without taking instructions from any of the political parties." This was, however, stalled by a WhatsApp message from the then ACS Home Sitaram Kunte two days after the officers had taken charge, stating that the Chief Minister had directed that status quo be restored and posting orders be cancelled. Kunte, in his statement has referred to this part.