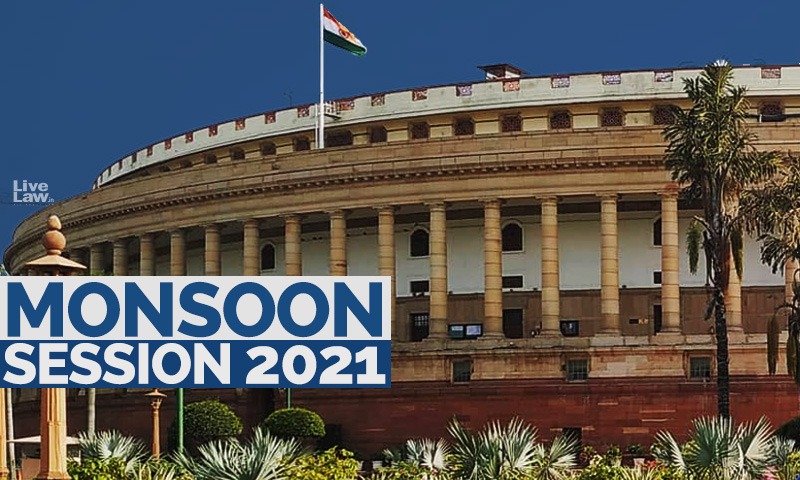 The Centre on Monday released a list of Government Business expected to be taken up during the Monsoon Session of 17th Lok Sabha, slated to commence from July 19. It proposes to move the following 23 bills for consideration and passing: Tribunal Reforms (Rationalisation and Conditions of Service) Bill, 2021 Introduced by Finance Minister Nirmala Sitharaman on February 13 during...

The Centre on Monday released a list of Government Business expected to be taken up during the Monsoon Session of 17th Lok Sabha, slated to commence from July 19.

It proposes to move the following 23 bills for consideration and passing:

Introduced by Finance Minister Nirmala Sitharaman on February 13 during the 2021 Budget Session, the Bill seeks to dissolve certain existing appellate bodies and transfer their functions to other existing judicial bodies.

An Ordinance to effect of the Bill was promulgated by the Centre on April 5, 2021.

Interestingly, the Bill also seeks to reduce the term of Tribunal members to 4 years. However, this provision was struck off by the Supreme Court yesterday, so far as the Ordinance is concerned. The Top Court has observed that this term violates the express direction given in an earlier judgment that the term of tribunal members should be 5 years.

Introduced by then Union Science and Technology Minister Dr. Harsh Vardhan on July 8, 2019, the Bill provides for regulation of use of DNA technology for establishing the identity of certain persons. It is identical to the 2018 Bill that was passed by the Lok Sabha in January 2019, but lapsed.

The Bill was referred to the Standing Committee on Science and Technology, Environment and Forests for further scrutiny in October 2019. Its report was tabled in the Lok Sabha on February 3, 2021.

This Bill seeks to regulate Assisted Reproductive Technology (ART) services in the country by regulation of ART clinics and banks, prescribing conditions for gamete donation and supply, prescribing rights of a child born through ART, etc.

It proposes to criminalize (i) abandoning/ exploiting of children born through ART, (ii) trading/ importing human embryos, (iii) using intermediates to obtain donors, (iv) transferring human embryo into a male or an animal.

Maintenance and Welfare of Parents and Senior Citizens (Amendment) Bill, 2019

This Bill seeks to bring step-children, adoptive children, children-in-law, and legal guardians of minor children under the definition of children for the purpose of Senior Citizens Act, 2007.

It also provides that children and relatives may also appeal decisions of the Tribunal apart from senior citizens. This will clear the cloud that was formed in view of conflicting decisions rendered a few High Courts on this aspect.

This bill proposes pre-packaged insolvency resolution process for corporate debtors classified as micro, small or medium enterprises under the MSME Development Act, 2006. As per the Government, this will ensure "quicker, cost-effective and value maximising outcomes for all the stakeholders, in a manner which is least disruptive to the continuity of their businesses and which preserves jobs".

An Ordinance to the Bill's effect was promulgated by the President on April 4, 2021.

The Bill seeks to provide a permanent solution and establish a self-regulated, democratically monitored mechanism for tackling air pollution in the NCR and adjoining areas, rather than limited ad-hoc measures.

It also seeks to set-up a Commission for Air Quality Management in order to streamline public participation, inter-State co-operation, expert involvement and persistent research and innovation.

In the past few years, the Delhi High Court and Supreme Court have issued slew of directions to tackle Delhi NCR's persistent problem of air pollution. Based on Centre's assurance that it was coming up with such a legislative exercise, the Top Court had kept in abeyance its earlier order appointing retired SC judge Justice MB Lokur as the head of a Committee to monitor the situation.

Following this, an Ordinance in this regard was promulgated by the President on October 28, 2020. The instant Bill will replace this Ordinance.

The Bill proposes: (i) de-licensing of the distribution business for increased competition, (ii) appointment of member from law background in every Commission for strengthening of APTEL (iii) penalty for non-compliance of RPO, (iv) Rights and Duties of Consumers.

The Bill will primarily privatise power distribution to enable the consumers to choose from multiple service providers (like the Telecom sector). Thus, it is not received well by the power engineers and employees, who will boycott work on August 10 as a sign of their protest.

This Bill proposes to prevent and combat trafficking in persons, especially women and children, to provide for care, protection, assistance and rehabilitation to the victims, while respecting their rights, and creating a supportive legal, economic and social environment for them, and also to ensure prosecution of offenders, and for matters connected therewith or incidental thereto.

This Bill seeks to amend the Factoring Regulation Act, 2011 to widen the scope of entities which can engage in factoring business. It was introduced in the Lok Sabha on September 14, 2020.

It was referred to the Standing Committee on Finance on September 25, 2020 and the Committee's report was tabled in the Lok Sabha on February 3, 2021.

This Bill is proposed with an aim to bring out a central Act for Essential Defence Services. An Ordinance for the same was promulgated on June 30, 2021.

The Bill empowers the Central Government to regulate un-interrupted supply of arms, ammunitions and other goods and services to the Armed Forces in case of strike against the decision to corporatize the Ordinance Factories.

This Bill proposes to make provisions for leasing of land and coal mining rights vested under the CBA Act to any company (including private sector company) which has become successful bidder in the auction of coal blocks conducted under the MMDR Act or the CMSP Act. For this purpose, it is proposed to provide for vesting of the land and coal mining rights in the State Government for further leasing to the successful bidder.

It also proposes that the land acquired under the Act shall be utilised for coal mining operations and allied or ancillary activities as may be prescribed by Central Government. Further, to provide for utilisation of the acquired land, where coal is mined out/ de-coaled or lands which are not economically viable or practically unsuitable, for coal development related activities and other public purposes.

Chartered Accountants, the Cost and Works Accountants and the Company Secretaries (Amendment) Bill, 2021

This Bill proposes to reform and speed up the disciplinary mechanism of Chartered Accountancy institutes.

The bill proposes to amend the Limited Liability Partnership Act, 2008 to decriminalize twelve (12) compoundable offences which deal with procedural and technical violations, Omission of two provisions is also proposed.

This Bill aims at greater democratization, modernization and overall improvement in governance structure of Cantonment Boards.

This Bill proposes to establish a Central University in the Union Territory of Ladakh.

This Bill seeks to declare the existing Indian Institute of Forest Management (IIFM), Bhopal a premier and only forestry management educational institute in the country, as institution of national importance and confers on it the power to grant degrees

This Bill shall enable easy and time-bound access for depositors to their hard-earned money and to further instil confidence in depositors about the safety of their money, it is proposed to introduce amendments to the DICGC Act, 1961.

The objective is to enable access by depositors to their savings through deposit insurance in time bound manner in case there is suspension of banking business of the insured bank under various provisions of the Banking Regulation Act, 1949

This Bill proposes to repeal the Maritime Zones of India (Regulation of Fishing by Foreign Vessels) Act, 1981 and provide for sustainable development of fisheries resources in the exclusive Economic Zone of India.

It also provides for responsible harnessing of fisheries in the High Seas by the Indian Fishing Vessel and promotion of livelihoods of small-scale and artisanal fishers and related matters.

This Bill seeks to make the system of laying of pipelines for transportation of Petroleum and Minerals, robust.

This Bill proposes to replace the Inland Vessels Act, 1917 in view of chronological changes and other changes that have taken place since then.