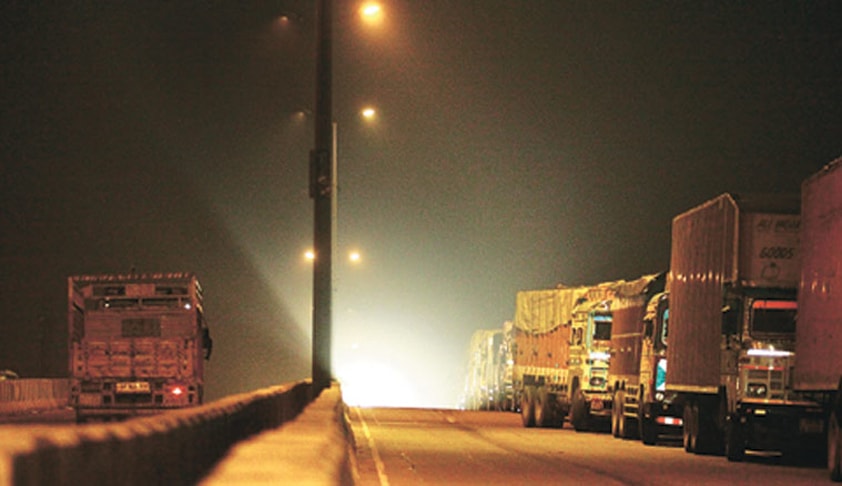 The Patna High Court on Tuesday awarded Rs. 5,00,000/- as compensation to a truck driver who was illegally detained and kept in custody for over 35 days by the Patna Police. A Bench of Chief Justice Sanjay Karol and Justice S. Kumar observed that the Police authorities in this case had acted in clear violation of the procedure established by law, inasmuch as the vehicle and the detenue...

The Patna High Court on Tuesday awarded Rs. 5,00,000/- as compensation to a truck driver who was illegally detained and kept in custody for over 35 days by the Patna Police.

A Bench of Chief Justice Sanjay Karol and Justice S. Kumar observed that the Police authorities in this case had acted in clear violation of the procedure established by law, inasmuch as the vehicle and the detenue were detained and kept in police custody for more than 35 days, without either filing of FIR or following any other procedure of arrest prescribed in law, ensuring constitutional protections to all persons.

It thus held that the authorities had acted in direct violation of detenue's fundamental rights under Articles 21 and 22 of the Constitution and ordered,

"The State of Bihar shall pay compensation to the detenue, namely, Mr. Jitendra Kumar @ Sanjay Kumar, an amount of Rs.5,00,000/- (Rupees Five lac) for the violation of his fundamental right under Article 21 of the Constitution of India. This amount shall positively be paid within a period of six weeks from today."

The Court expressed that truck drivers in India are not only under an endless pressure to make their ends meet, but are also susceptible to be at odds with the law and other functionaries of the State.

"Their life is defined by great hardship and sacrifice. They are under constant pressure to complete long journeys in short durations; operate under conditions of extreme lack of sleep; lack proper sanitation along highways and roads; have improper access to food and water, and have to spend most of their time away from their families. Along with these gruelling adversities, they are at constant odds with the police and State authorities, while trying to protect themselves from the continuous threat of highway robberies," it observed.

It thus stated that there is an immediate need to improve the conditions of truck drivers in the State of Bihar as well as across the country, and issued a series of directions for protection and welfare of truck drivers, reproduced at the end of this report.

The Bench observed that the extreme vulnerabilities faced by truck drivers in India often makes them prone to derelictions of the dark side of human civilization. It noted that whereas truck drivers act as the backbone of the national economy, they are amongst the most vulnerable sections of our society.

"The backbone of the national economy is dependent upon the untiring and ever driving efforts and labour of the poor, mostly illiterate and the vulnerable. In the absence of the hard work and toil of truck drivers, economic activity throughout the country is bound to come to a standstill.

Truck drivers are faced with a great deal of high stress and pressure as part of their job. The introduction of the additional hassle and trauma, perpetuated by the authorities, through the use of hostility and torture is akin to grave human injustice. Such practices are a clear violation of the human rights guaranteed to every citizen of the world."

It observed that the government institutions must understand that in any democracy, the right to live with dignity and self-worth, cannot be defiled within the ambit of Rule of Law and good governance.

The Court rooted for proper education for truck drivers and focus on their healthcare, as they are undeniably invaluable to the prosperity and development both of the State and the Nation.

In this context, the Court has directed the State of Bihar to make efforts towards improving the conditions of the truck drivers and consider issues about their healthcare; access to food; working hours; payment of wages; literacy and access to technology.

"The truck drivers face constant problems with the authorities during their course of travel. They have to cross several checkpoints while crossing states/UTs. The authorities can be particularly discriminatory at these checkpoints against the truck drivers. The lack of literacy among the truck drivers and significant disparity across state laws can be a huge barrier in their compelling journey. The drivers at the ground level are required to deal with the authorities, and lack of proper knowledge gives the latter enough leverage to harass and haggle these former while stopping the movement of trucks altogether. This unnecessary practise causes a tremendous amount of time lost to the National Economy as well as the Economy of the State.

It is apparent that they are invaluable to the movement of the Economy and face widespread discrimination and constant hardships. The State ought to consider constituting a body to address these issues. There is an immediate need to address the human rights violations faced by them," the Bench emphasized.

The petition was filed by the Truck owner, alleging that the Police illegally detained his vehicle (milk tanker) along with its driver, namely, Jitendra Kumar, without lodging of any FIR and/or following the appropriate procedures of recording the detention of the individual or impounding the vehicle, rendering the seizure unlawful and detention illegal.

As per the Police version, the milk tanker and the detenue were apprehended on account of an accident injuring the pedestrian. Allegedly, the detenue fled from the spot of the accident and later on the vehicle intercepted by the officials of another Police Station i.e. Dariapur Police Station and handed over to the officials of Parsa Police Station. The FIR was not filed promptly as the officers-in-charge could not track down the injured person. Further, the driver (detenue) was never detained and he willingly sat inside the vehicle parked outside the police compound.

As per the detenu however, the tanker vehicle was seized in the jurisdiction of Parsa Police Station. The tanker was taken to a nearby dairy for milk to be extracted and thereinafter detained at the police station where the detenue was detained in extra-judicial custody.

The Court observed that the Police version of the said incident was quite 'unplausible' inasmuch as it failed to answer several essential questions, leaving holes in their story, viz.:

(ii) Why was the vehicle not impounded?

(iii) why was the drive not produced before the Court?

(iv) when there was no statement of a person witnessing the occurrence of the accident, then how did the Police get to know of such facts?

In this backdrop the Court observed that the instant case indicated a grim state of affairs where the police officials have acted in contravention and violation of the procedure established by law.

"The vehicle and detenue were detained and kept in police custody for more than 35 days without either filing of FIR or following any other procedure of arrest prescribed in law, ensuring constitutional protections to all persons," the Court observed.

It held that such illegal detention of the detenu truck driver directly infringed his right to personal liberty enshrined under Article 21 of the Constitution and thus, he is entitled to compensation under public law remedy.

Procedure of Arrest required to be followed

The Court observed that there was no statement of any person witnessing the occurrence of the accident. Thus, the Police had no suspicion of the detenue having committed any non-cognizable offence, as mandatorily required of initiating action under Section 41 CrPC. "There was neither any complaint nor any credible information warranting detention without the order of any Magistrate," the bench noted.

Furthermore, the Police did not serve notice under Section 41A CrPC, either upon the owner of the vehicle or the person driving at the time of occurrence of the alleged accident. Thus, there was an infraction of not only the said provision but also Section 41B CrPC which requires the memo of arrest to be prepared furnishing correct and complete information, as available, and witnessed by any independent person.

The detenu's right to a fair investigation, which was held to be a facet of a fair trial under Article 21 of the Constitution by the Supreme Court in Gangadhar @ Gangaram v. State of Madhya Pradesh, 2020 SCCC OnLine SC 623, was also said to be violated.

Noting such rampant violations of the law, the Court remarked that the concerned Police officers are liable for prosecution under Section 166 IPC.

"In our considered view, simply taking up action of initiation of disciplinary proceedings is not enough. The entire Police Force needs to be sensitized of the constitutional and statutory rights of the detenue/accused, also from the angle of human rights," the Bench added.

Detention of Vehicle without FIR or Seizure Memo, Power and procedure for detaining vehicles

The Court observed that the manner in which the police officers apprehended the milk tanker/ vehicle was in complete violation of the procedure for seizure established by law.

It noted that the concern officers paid no heed to the mandate under Section 102 of CrPC (power to seize on suspicion of commission of any offense); Section 207 of the Motor Vehicle Act (power to seize vehicle if it is found to be in contravention of the Act); and the procedure for seizure, described under Section 457 of CrPC.

However, the Court refrained from taking any decision thereof and granted liberty to the Petitioner to seek remedy before the appropriate forum, under private law.

Since the Court concluded that the Police officials had violated the detenu's fundamental rights, it proceeded to observe that the instant case is fit for hefty compensation to be levied on the State.

It directed the State of Bihar to pay an amount of Rs.5,00,000/- as compensation to the detenue, within a period of six weeks, for the violation of his fundamental right under Article 21 of the Constitution of India.

The Court referred to a number of precedents to clarify that relief of monetary compensation, as exemplary damages, can be granted in writ proceedings under Article 32 or under Article 226, for established infringement of the indefeasible right guaranteed under Article 21 of the Constitution. It observed,

"The purpose of public law is not only to civilize public power but also to assure the citizen that they live under a legal system which aims to protect their interests and preserve their rights. Therefore, when the Court moulds the relief by granting "compensation" in proceedings under Article 32 or 226 of the Constitution seeking enforcement or protection of fundamental rights, it does so under the public law by way of penalizing the wrongdoer and fixing the liability for the public wrong on the State which has failed in its public duty to protect the fundamental rights of the citizen."

The Court further observed that the purpose of this compensation is to restore the confidence of the citizen in the system where their rights and interests are preserved.

"The payment of compensation in such cases is not to be understood, as it is generally understood in a civil action for damages under the private law but in the broader sense of providing relief by order of making 'monetary amends' under the public law for the wrong done due to breach of public duty, of not protecting the fundamental rights of the citizen. The compensation is like 'exemplary damages' awarded against the wrongdoer for the breach of its public law duty. It is independent of the rights available to the aggrieved party to claim compensation under the private law in action based on tort, through a suit instituted in a court of competent jurisdiction or/and prosecute the offender under the penal law," the Court added.

The Court has clarified that the right of the detenu to seek compensation under public law is independent of his right to claim other damages as private law remedy.