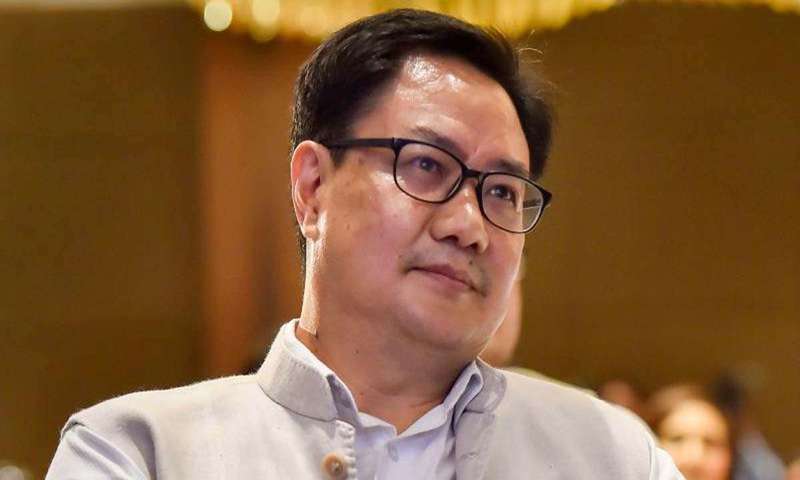 Union Law and Justice Minister Kiren Rijiju on October 17 said that the people of the country are not happy with the collegium system and that as per the spirit of the Constitution of India, it is the job of the government to appoint judges.

He further said that people can see the politics among the leaders but they do not know the politics going on inside the judiciary while appointing judges as the deliberations (during the collegium meetings) are intense. He added that the system is opaque and not transparent.

Addressing the 'Sabarmati Samvad' program organized by 'Panchjanya', a weekly magazine published by the RSS, Union Law Minister Rijiju said that he has noticed that half the time judges are busy deciding appointments, due to which their primary job, which is to deliver justice, is affected.

Stressing the need to rethink the collegium system of appointments to the higher judiciary, Union Law Minister Kiren Rijiju that till the year 1993, every judge in India was appointed by the law ministry in consultation with the Chief Justice of India and this practice gave us very eminent judges at that time.

However, he added, that that the Supreme Court defined consultation [as appearing in Article 124(2) of the Constitution of India] as concurrence and further, the collegium system was expanded by the judiciary in 1998.

"I know that the people of the country are not happy with the collegium system of appointment of judges. If we follow the spirit of the Constitution, then the appointment of judges is the job of the government. Secondly, there is no practice anywhere in the world except in India that judges appoint judges themselves. Thirdly, as the Law Minister, I have seen that half the time and mind of the judges is spent in deciding who will be the next judge. Their primary job is to deliver justice," Law Minister Rijiju said.

He also said that if judges are instrumental in appointing judges, then they can't claim that they should be above criticism.

"The mechanism to appoint judges is opaque. Half of the Judges' time is engaged in making deliberations as to who should be appointed as a Judge. If Judges are involved in the appointment of the Judges, they can't be immune to criticism.

While selecting Judges, it is but natural that you would recommend people who are known to you. Judges write too, I have those secret documents, but still, I am telling you that when judges send comments about the recommendees, they say...I know him, he appears before me...his character is good, I am happy with his work, etc...Now, when you have come into the executive process, then it is natural that you would recommend only those who are known to you, who are related to your family, who are close to you.

Such Allegations ['Uncle Judge Syndrome'] are raised when the judges are involved in the appointment of fellow judges. Before 1993, no Judges were criticized for Judicial appointments, because they were not part of the process"

Our readers may note that in the Second Judges Case (1993), the Supreme Court had essentially introduced the Collegium system, holding that "consultation" really meant "concurrence" [as appearing in Article 124(2) of the Constitution of India].

The Supreme Court had added that it was not the CJI's individual opinion, but an institutional opinion formed in consultation with the two senior-most judges in the Supreme Court and that the same would be binding upon the executive.

Currently, the collegium is headed by the Chief Justice of India, and it further comprises four senior-most judges of the court.