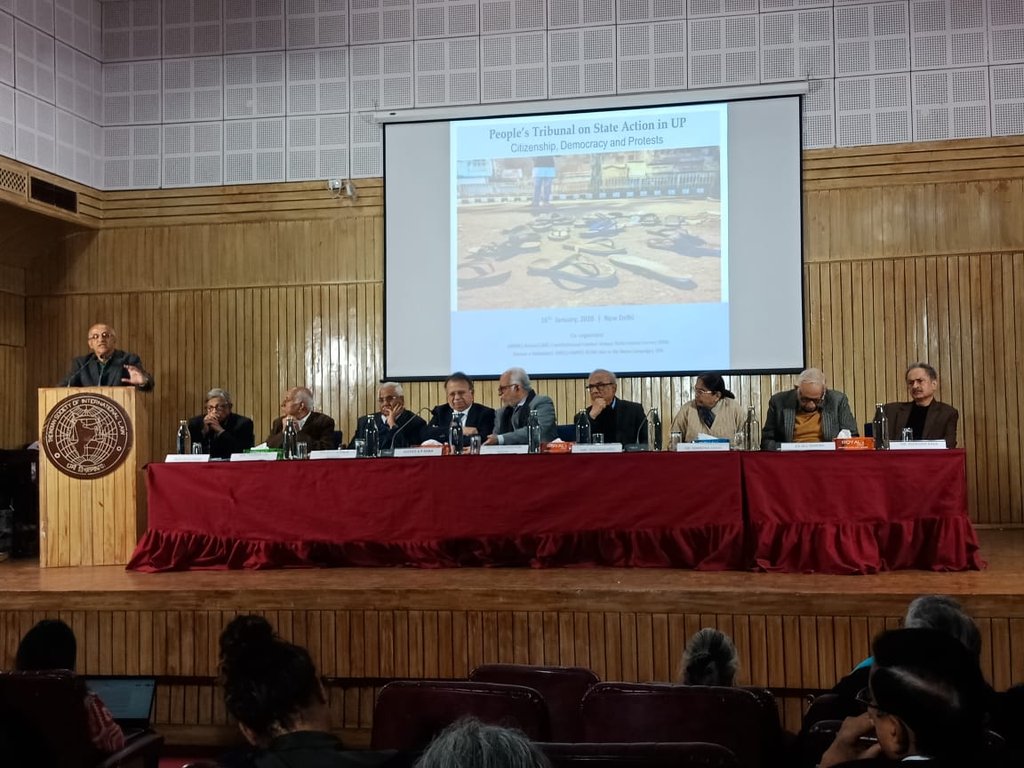 An event called the People's Tribunal on State Action in UP was conducted in Delhi on Thursday to bring to light the manner in which the Uttar Pradesh police and State administration had encroached upon human rights of people, primarily over the last month, who were participating in peaceful protests against the CAA, NRC and NPR. This tribunal, it was informed, was "a very important...

An event called the People's Tribunal on State Action in UP was conducted in Delhi on Thursday to bring to light the manner in which the Uttar Pradesh police and State administration had encroached upon human rights of people, primarily over the last month, who were participating in peaceful protests against the CAA, NRC and NPR. This tribunal, it was informed, was "a very important initiative to understand and respond to the recent state action in UP".

The set up was, as is evidenced by the name, one that resembled a judicial tribunal where several experts, victims, lawyers and journalists gave testimonies and video presentations were shown before a panel, called the jury. This jury comprised of some eminent citizens including former judges, diplomats and historians amongst others. It comprised of Justice A P Shah, Justice Sudarshan Reddy, Prof Irfan Habib, Justice V Gopala Gowda, Shantha Sinha, Prof Neera Chandhoke, Deb Mukherji, Chaman Lal, Dr. N C Saxena and Anirudh Kale.
After a number of testimonies were shared and addresses were made, over almost 7 hours, the jury made an assessment and gave their findings, which were read out by Justice Sudarshan Reddy. In their statement it was stressed that UP's state action stood out as trying to crush the voices of dissent. They expressed their worries and dismay which was brought to their notice through the testimonies. They said they were "convinced that the entire state machinery, led from the top, acted with grave prejudice and perpetrated violence targeting one particular community, the State's Muslim population and the social activists leading the movement."
With regard to police violence, it was asserted that UP police was guilty of enormous violence against Muslims and beat up people who were not even a part of the protest. The police was slammed by the jury for being directly responsible for filing false cases, destruction of public property, intimidation, communal abuse, killing people without following the law and prevention of treatment of severely injured by medical personnel.
Turning its attention to the executive, it was stated that the political leadership and administration failed to control the widespread atrocities committed by the cops. It was even observed that the Chief Minister directed the use of force against protesters by using words like badla. They went on to say that medical care was declined, even to seriously injured, and medical professionals said that it was on the instance of the police. This denial of emergency is a violation of Right to life guaranteed under Article 21 of the Constitution, Supreme Court judgments and various international treaties which India is a signatory to, they added.
Acknowledging the impact that this action has on survivors and their mental condition, it was urged that immediate and adequate mental health support be given. Further they found that people standing up against this action were harassed and called names like urban naxals.
Condemning the attacks it was stated in conclusion that "the state of affairs in UP shows a complete collapse of rule of law".
Download Jury Statement
[Read Jury Statement]
TagsDelhiPeople TribunalCAANRCAnti CAA ProtestUP POliceUP Police Attrocity
Next Story
Similar Posts
+ View more
Law Firms
+ More
Latest News
+ More
लाइव लॉ हिंदी
+ More
International
+ More
Environment
+ More