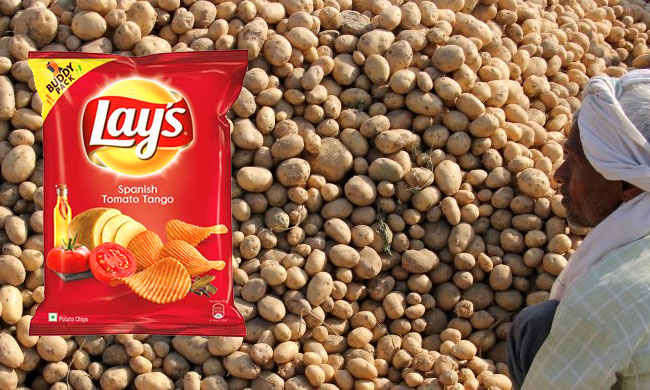 On April 8, Judge Moolchand Tyagi passed an ex-parte ad-interim order restraining the farmers from growing the potato variety, after observing that Pepsico had established a "prima facie case".

The multinational food giant PepsiCo has sued farmers of Gujarat for cultivating the potato variety used in the 'Lays' brand of chips manufactured and sold by it.

In the commercial trademark suit filed in Ahmedabad City Commercial Court against four farmers, PepsiCo India Holdings Ltd has claimed that in 2016 it obtained registration under The Protection of Plant Varieties and Protection of Farmers Rights Act 2001 to breed a special variety of potato, which is used in making "Lays" chips.

It alleged that farmers in Gujarat were illegally growing this breed of potato after obtaining its seeds from the licensed farmers of Pepsico in Punjab. The examination of the samples collected by the company discreetly from the farmers showed that they were growing the registered variety without license, stated Pepsico in their plaint.  Therefore, it claimed that its rights under the Act were infringed and sought for interim injunction to restrain the cultivation of the potato breed.

On April 8, Judge Moolchand Tyagi passed an ex-parte ad-interim order restraining the farmers from growing the potato variety, after observing that Pepsico had established a "prima facie case".

The Court also appointed a commissioner to prepare an inventory, take samples and send them to a government lab for analysis.

Today, Advocate Anandvardhan Yagnik entered appearance on behalf of all farmers in the suits and sought time to file reply. PepsiCo submitted that the matter can be settled if the farmers refrain from using the registered variety or choose to obtain license from it for continuing the cultivation. The farmers' counsel submitted that he will get instructions from his clients regarding this by the next hearing date, June 12.

The Act was made under the obligations of India under TRIPS(Agreement of Trade Related Aspects of Intellectual Property Rights) "for protection of plant varieties, the rights of farmers and plant breeders" and "to facilitate the growth of the seed industry in the country which will ensure the availability of high quality seeds and planting material to the farmers".

The Act creates the Protection of Plant Varieties and Farmers' Rights Authority and Plant Varieties Registry, which can register new plant varieties if they conform to the criteria of "novelty, distinctiveness, uniformity and stability".

The Authority can refuse registration to prevent commercial exploitation of a plant variety if it is necessary to "protect public order or public morality or human, animal and plant life and health or to avoid serious prejudice to the environment".

Under Section 64, a registered variety can be cultivated only by the registered breeder or its licensee, and cultivation of the same by anyone else will constitute infringement, leading to penalties.

However, Section 39 of the same Act allows a farmer "to save, use, sow, resow, exchange, share or sell his farm produce including seed of a variety protected under this Act" so long as he does not sell "branded seed" and Section 42 protects "innocent infringement" by farmers who were not aware of existence of registration of the seed variety.

The farmers groups have accused Pepsico of resorting to intimidating tactics and have voiced the apprehension that the case can have a snow-balling effect on the cultivation of several other seeds by farmers.

"Indian farmers cannot be intimidated by MNCs who have been introducing GM seeds to our fields. They have been altering the biodiversity of the region and for us; it is important that farmers retain the right to own the natural diversity,", said Kapil Shah of Jatan Trust on this development.

Over 190 activists have urged the Centre to ask PepsiCo India to withdraw its "false" cases against Gujarat farmers for allegedly illegally growing a particular variety of potatoes "registered" by the company.