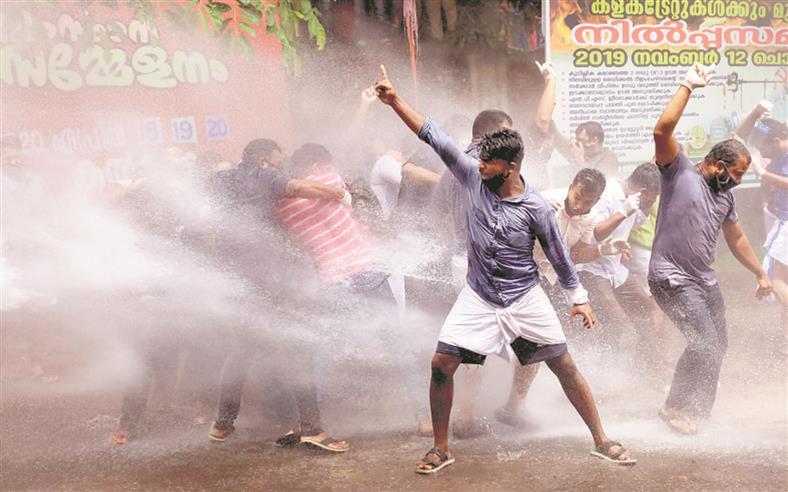 "The political parties and its associated organisations in Kerala are conducting huge public protests and gatherings through out the state forgetting the regulatory guidelines. And this is a serious lapse and such incidents are continued, the community spreading cannot be contained and the outcome of such negligence will be grave and irreparable", contended the petitioners.

The petitioners are John Numpeli Junior, is a Practicing Lawyer at the High Court of Kerala along with two others.

The Petitioner has alleged that, for the administration ,control and regulation of public actions in the pandemic days, there exist enough and more legal instruments. And it is due to the indiscipline act of the pubic and irresponsible attitude of the Political parties ,the situations are more aggravated.

"However, the political parties, either from the ruling side or from the opposition side are taking irresponsible attitude towards the compliance of regulations and they are regularly calling for largely gathered public protests, citing various reasons ", stated the petition filed through Advocate K P Pradeep.

The political parties are conducting all these large gatherings and protest based on their protected rights under the Constitution. And it is not absolute as per the petitioners. The Representation of Peoples Act,1951 authorises the Election Commission of India, to grant registration, to the political parties, which satisfy the prescribed qualifications .Also ,Section 126 of the Representation of Peoples Act, 1951 gives the power to restrict the public meeting during the election process, subject to the conditions. So the settled law is that, none of the political parties are enjoying absolute freedom for political campaign and huge public gatherings as a matter of their unfettered right, asserted by the petitioner.

The recent examples of disturbing protests alleging the involvement of officers of the Government in one Gold Smuggling Scam, Petrol price hike, and the recent episode held in the rural village of Poonthura in Thiruvananthapuram District, a large gathering of the local people have detained the health professionals and workers, who were in the field work of covid 19 prevention and detection test, are all clear examples in which political parties and their local wings are involved, as observed by the Petitioner.

The petitioner observed that the spread of COVID 19 is already declared as a national disaster and it will decently qualify the definition under the Disaster Management Act,2005.

" The Central Government as well as the State Government enjoys wider powers to initiate and manage mitigation and prevention activities, invoking the powers under Chapter V of the Act, 2005", observed by the petitioner.

As per the Petitioner the Disaster Management Act under Section 72, possess an overriding effect over all other statutory schemes in India, "Thus the statutory scheme is clear, unambiguous and indisputable that during the days of disaster like, pandemic or epidemic, the Government authorities have larger powers, subject to the constitutional limitations, and can issue necessary directions to the persons, collective groups of such persons, which includes political parties and other associated organisations of political parties. However, the State machineries have failed to contain the larger political gatherings, in the name of political protests, whatever be the reasons and genuineness of such political gatherings ", as stated by the petitioner.

The Petitioner is also emphasising on the aspect of Right to health and live in a healthy environment. And in the instant scenario, due to the irresponsible attitude of the political parties, in Kerala, their associated organizations, larger public gatherings are being occurred, on daily basis. This will curtail peoples rights to enjoys the fundamental protected right to live healthy and in a safe environment, alleged by the petitioner.

"Here the Union Government and the State Government has failed to contain the political gathering in large scale, obviously they are reluctant due their own political reasons but giving less concern to the public health and public order ",stated by the petitioner.

The petitioner is vey much critical about the irresponsible attitude of the political parties and also the machineries of the state who miserably failed in taking action against the political leaders who are canvasing for the violation of Covid 19 regulations and conducting larger public gathering, in the name of their right to protest against the Government.  The Petitioner stated , "The irresponsible attitudes of the respondent political parties and that of the political coalitions and that of their associated organizations, lead to an alarming situation in the society that the existing preventive mechanism is improper to contain the pandemic situation, due to the larger public gatherings in the name of political motivated group protests "

Relief Sought by the Petitioner are :

To declare that the large scale public gathering in the name of protest or activities by the political parties in the State, is unconstitutional and illegal, during the phase of Covid 19 regulations and direct the 4th respondent to derecognise such political parties, who are involving in the practices of larger political gatherings, violating the norms issued by the Government, from time to time, during the period of pandemic Covid 19.

To Issue direction to the 1st and 3rd respondents to take strict actions against the organizers or participants; or both, of large political gatherings, who are acting in violation of existing Covid 19 regulations

To direct the political parties to desist themselves from organizing any kind of political or social activities with large public gatherings, during the period of covid 19 regulations or violating the Covid 19 regulations issued by the appropriate authorities, from time to time.