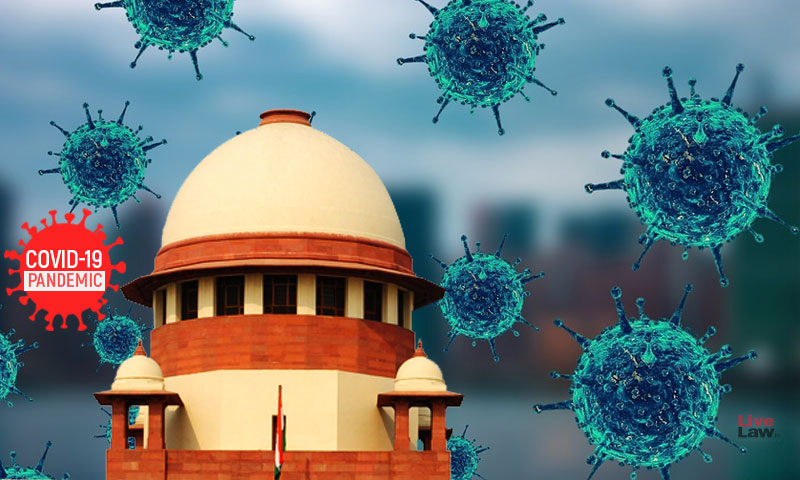 A PIL has been filed in the Supreme Court by Rajesh Inamdar and National Information Technology Sena a Union working for welfare of IT/ITES/BPO/KPO employees in Pune praying that the March 20 Advisory of the Labour and Employment Ministry, the March 29 GO of the Central government and the various state government resolutions, so far as they relate to the directions to the employers of both...

A PIL has been filed in the Supreme Court by Rajesh Inamdar and National Information Technology Sena a Union working for welfare of IT/ITES/BPO/KPO employees in Pune praying that the March 20 Advisory of the Labour and Employment Ministry, the March 29 GO of the Central government and the various state government resolutions, so far as they relate to the directions to the employers of both the private and public companies to not lay off/terminate employees or cut their salaries, in the wake the COVID lockdown, be implemented.

"The present petition is not to seek a direction from this Hon'ble Court to burden employers. However, it is submitted that a balance needs to be drawn between the rights of the employers and those of the employees, the latter being the more disadvantaged class", clarify petitioners, Rajesh Inamdar, Advocate, and Harpreet Saluja, General Secretary, National Information Technology Employees Sena.

"The present petition is being preferred only to ensure that in the unprecedented situation, whereby the functioning of whole country has virtually come to a standstill, does not result in an unmitigated disaster in the loss of jobs in the public/private sectors, thereby forcing a huge human cost on the Country. The Country which was already trying to recover from the economic crisis and unemployment issues had to be brought to complete blockade due to rapid spread of the COVID-19 wherein the entire nation was put into lockdown due to which the issues which were already existing will be worsened", it is asserted.

The Government of India issued an advisory dated March 20 to the various public/private companies to not lay off its employees or to not terminate their services, and also not deduct their pay. The notification also mentions that even if a place of employment is non-operational, the employees would be deemed to be on duty. In his address to the nation the Prime Minister has requested Companies not to fire/terminate employees due to coronavirus lockdown and also to pay full wages/salaries to the employees. On March 29 2020, the Union Government, to effectively implement the lockdown order and to mitigate the economic hardship of the migrant workers issued an order under Section 10(2)(1) of the Disaster Management Act, 2005. It directed the State governments and the Union Territories (SGs/UTs) to issue orders, compulsorily requiring all the employers in the industrial sector and shops and commercial establishments to pay wages to their workers at their workplaces on the due date without any deduction during their closure due to lockdown

It is submitted that various private Companies in the country have initiated a drive of illegal mass termination of the employees, withholding of the salaries or illegal deduction of salaries in complete breach and violation of the directions/advisories, taking advantage of the deadlock situation which has emerged in the Country.

The employers who are in a dominant position are taking harsh decisions and unconscionable bargains with the employees. A sizable population in the country is in the service of private companies, and therefore, apart from their employment contracts, have no other refuge. The employees working in various IT/ITES companies across countries for over several years have been instructed/informed over phones calls about their termination without even following the procedure envisaged under various enactments viz Industrial Disputes Act etc and hence, such terminations are illegal, unreasonable and based on convenience. It is submitted that no procedure like notice period, intimation to government authorities, payment of retrenchment compensation, payment of gratuity, Leave encashment, etc. has been undertaken by the Companies.

It is advanced that the employees are in no way responsible for the present pandemic lockdown situation, but are at the receiving end. In the absence of issuance of any binding directives/directions to the private companies, thousands of employees will be susceptible to losing their jobs/incomes, which will lead to an unprecedented economic situation – a situation that the country cannot afford.

It is pointed that the Government's order directs all commercial establishments, private offices, industrial establishments and factories to remain closed through the lockdown. All these employees who were terminated over a phone call/email in the midst of the lockdown situation have no option even to protest or seek explanations. Immediately thereafter in almost all cases access to company emails and other platforms were barred.

Salaries have also been withheld and deducted without any basis. Most of the IT employees who stay away from their family are finding it difficult to even pay monthly rents, EMIs, manage daily expenses and other liabilities.

"It is pertinent to indicate that as per the statistic presented Centre for Monitoring Indian Economy, (CMIE) as on 19.04.2020 the unemployment rate 30 day moving average (%)in Urban India 23.93 whereas in Rural India is 20.54 and if no steps are taken in this regard the ratio of unemployment will be further exacerbate", it is argued.

"If this Hon'ble Court were not to pass Orders, there would be an unprecedented economic situation created in the country, and several thousand persons falling within the bracket of "middle class" would be adversely and prejudicially affected", the petition avers.

It is submitted that the economic and social impact of unregulated mass terminations and delayed payment of salaries or pay cuts will be extremely severe and have a very large and serious human impact, and in contravention of the fundamental rights under Articles 14, 19(1) (g) and 21.

"While the advisories issued by several state governments in relation to non-termination and non- deduction of wages of employees may not have a binding effect, the state governments are empowered to issue a direction in this regard under their respective Shops and Establishment legislations", suggests the plea filed by AOR Amit Pai, settled by Senior Advocate Devadutt Kamat.