'No Faith In Investigation Carried Out By SIT Of UP Police': Plea Filed In Supreme Court Seeking CBI Probe Into Death Of Kanpur Realtor Manish Gupta 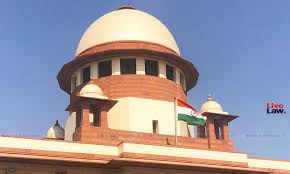 Wife of deceased Kanpur realtor Manish Gupta has moved the Supreme Court seeking a Central Bureau of Investigation (CBI) probe into his death following a police raid in a Gorakhpur hotel early on September 28. The plea has also sought the trial to be conducted in a CBI Court in Delhi instead of in Uttar Pradesh to ensure a fair trial sans the interference of powerful...

Wife of deceased Kanpur realtor Manish Gupta has moved the Supreme Court seeking a Central Bureau of Investigation (CBI) probe into his death following a police raid in a Gorakhpur hotel early on September 28. The plea has also sought the trial to be conducted in a CBI Court in Delhi instead of in Uttar Pradesh to ensure a fair trial sans the interference of powerful police personnel.

According to media reports, Gupta had allegedly died after being assaulted by six police officers in Krishna Palace hotel in Gorakhpur where he was staying along with two of his friends. Later, the police claimed that they were questioning the three men when Gupta who was reportedly drunk, fell and suffered a head injury. He was subsequently taken to the BRD Medical College where he died while undergoing treatment, the police has further alleged.

Enumerating upon the unfortunate turn of events, the plea averred,

"On 27.09.2021, certain police officials from the Police Station, namely the Station Officer (herein-after referred to as "SO") Mr. Jagat Narayan Singh, Sub-Inspectors Mr. Akshay Mishra, Mr. Vijay Yadav and Mr. Rahul Dubey, Head Constable Mr. Kamlesh Yadav and Constable Mr. Prashant Kumar arrived at the hotel in the late hours of the night. In a shocking display of high-handedness and police brutality, they proceeded to viciously assault the Petitioner's Husband, leading to his death. It is noteworthy that the factum of brutal violence and torture having been inflicted upon the Petitioner was confirmed upon post mortem of the dead body by the postmortem report"

The petitioner further contended that after the incident, the immediate reaction of the local police was to shield the perpetrators and try to pass-off the murder as an accident.

"The police deliberately didn't secured the crime scene and didn't taken any attempt to protect the evidence at the crime scene and further the F.I.R. was registered at 1.30 p.m. on 29.09.2021 i.e. almost 48 hours after the happening of this gruesome incident on 27.09.2021", it was argued further.

It was further stated that the petitioner along with rest of the family members of the deceased had met the Chief Minister of Uttar Pradesh Yogi Adityanath on September 30 requesting for a transfer of investigation to the CBI which was thereafter accepted by the Chief Minister.

Following the recommendation made by the Chief Minister, certain officials of the Government of Uttar Pradesh made a formal announcement as well, in a press-conference about recommending a CBI investigation, the plea further stated.

"It is believed that the said SIT is presently investigating the matter. However, till today cloths and other belongings of the deceased have not been recovered by the SIT", the petitioner submitted.

The petitioner further expressed reservations to the fact that the CBI had not yet assumed charge of the investigation despite a lapse of 3 weeks since the date of the official announcement. Aggrieved by the lack of initiation of appropriate action for assumption of charge by the CBI, the petitioner had also addressed a representation to the CBI via email imploring them to register the FIR and carry out the desired investigation in order to prevent destruction and tampering of evidence.

Seeking a CBI probe for the purpose of a fair investigations sans political pressure, the petitioner remarked,

"In this case influential and well connected local police officials are themselves complicit in the ghastly act of murder, significantly increases the chances of destruction of evidence and provides avenues for the accused to escape the hands of justice. The Petitioner has no faith in the investigation being carried out by the SIT considering the status and power of the accused persons and the overt actions undertaken by the local administration and police authorities to shield them initially, before ultimately grudgingly succumbing to public pressure and calls for accountability"

The plea also placed reliance on a host of Supreme Court judgments such as R.S. Sodhi Advocate v. State of U.P. and Subrata Chattoraj v. Union of India wherein the Apex Court had directed the transfer of investigation to the CBI in various similar sensitive matters involving complicity of local police officials. Carrying out of the trial in Delhi is crucial inter-alia to ensure safety and security of key eye-witnesses and associated persons and to ensure that the trial is not compromised by the influential and powerful accused persons, it was further averred.

"A criminal trial represents not just a quest to achieve justice for the family members of the deceased person but it also places a far larger representative role in terms of the faith of the common public in the justice delivery system. Further, any possibility of influence or other external pressures in the conduct of the trial serves not only to diminish the faith of the public at large but also serves to embolden those with the violent and criminal mindset in attempting to get away with their crimes", the petitioner submitted further.

The petitioner is being represented by Advocates Anand Shankar and KK Shukla.